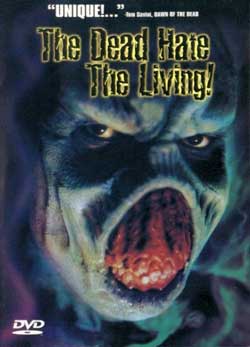 When a renegade band of young filmmakers break into an abandoned hospital to make their horror epic, they stumble upon a real dead body and decide to use it in their movie. They accidentally bring it back to life, open a portal to a dead world that releases dozens of other zombies, then struggle for their lives in a desperate attempt to flee from the creatures who apparently have them hopelessly trapped in the hospital.

The Dead Hate the Living, a groovy tribute to The Evil Dead franchise, with groovy tunes to match. What starts as a seemingly low-budget horror flop, blossoms into a satisfactory homage to a horror movie classic, but with an innovative twist and fresh approach. Directed in 2000 by Dave Parker, whom coincidently stars in the film by the same name, this B-movie gem hails from the same production company that distributed 1989’s horribly awesome cult classic Puppet Master. It opens with the typical airing of a tape left behind by a lone survivor (most often a scientist) before committing suicide. In the tape, the frantic and flustered long-haired man mutters on about “subjects,” “aggression,’ and a “forbidden wall,” all a massive foreshadowing of the events to unfold. 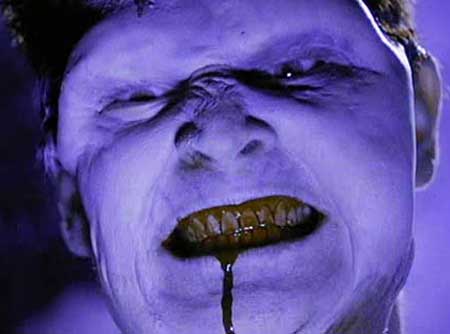 Cut to the next scene, where one can easily predict the subsequent outcome. A mildly attractive female doctor comes out to examine an obviously zombified corpse. To no one’s surprise, the corpse reanimates and attacks the doctor. Then things start to get freaky…necrophilia style. But before the taboo can unfold on screen, the scene shifts to reveal a staged set. “David,” the director of what all characters involved deem a “B movie,” reels the audience back into the film’s reality where we meet the main cast, including David’s spectacularly bitchy sister—amongst other colorful characters. 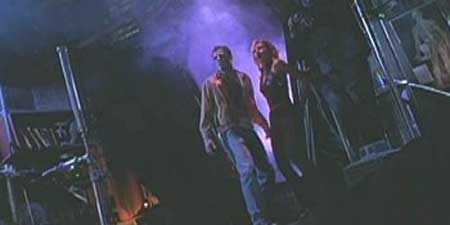 What makes this movie fun is its inherent irony and humor. The director takes a very Shakespearean approach: he uses the thematic device of “a play within a play.” The characters participate in a production of a staged zombie apocalypse, whilst unbeknownst to them one occurs outside the doors. This functions as the main irony. When initially introduced to the characters acting in David’s production, each masquerades on set in his or her makeup resembling the actual wounds they will possess later in the film; the transformation of the “fake” prosthetics versus the “real” wounds translates delightfully to the eye. 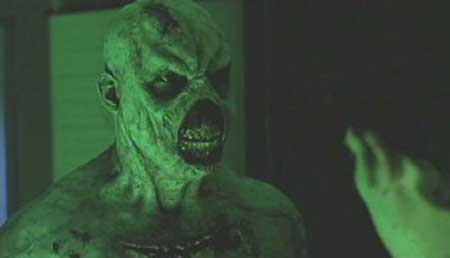 Though the events unfolding after the production crew cataclysmically decides to utilize a sinister coffin spontaneously found in the basement of their set do not actually reflect a “zombie apocalypse” the way modern audiences interpret one, the aesthetics conceptually look similar. Again, think Evil Dead; the method of the zombies’ materialization, as well as what animates them, parallel the methods of Sam Raimi. Instead of a biological experiment gone awry, Parker takes the demonic route. This allowed Parker to have great artistic liberties with the design of his movie monsters, whom could easily stand in as extras on any set resembling the horrors of hell. Of course, monstrous henchmen need a ring leader; enter the slightly satanic-like Dr. Eibon, whose propensity for necrophilia startles the viewer. If not pining over his desiccated and decomposing bride (whom Topaz comically sucker punches into dust), then he cannot wait to kill Topaz and make her his bride—emphasis on order of sequence of events.

Although the catalyst of the movie’s main horrific events comes rather banally (the sacrilegious and ethically immoral use of a stranger’s corpse and coffin for monetary gain and entertainment purposes), the result of said catalyst unexpectedly gives this film a genuine uniqueness. 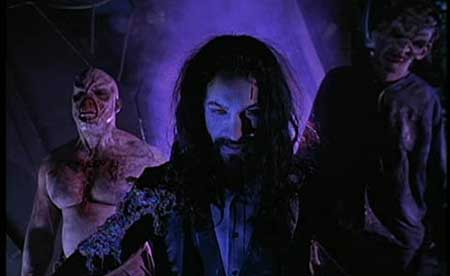 Instead of a typical zombie apocalypse, the characters and their physical surroundings are stuck in limbo, a plane filled with the feasting undead and clouded in a perpetual purple haze. The revelation of this fact ignites an interesting plot turn, where the movie starts to show us scenes of zombie transformations, zombie machete and chainsaw massacres, and unusual deaths—all accompanied by raw punk sounds and kooky camera angles that give this movie that extra layer of frosty endearment.

Overplayed and forced acting (particularly by characters Nina and David) act as the biggest indiscretion in this film. However, perhaps the makers intended this indiscretion. After all, the entire plot screamingly acts as a tribute to beloved B-movies and the Campbell franchise. Before making their escape into the perilous world of limbo, sole survivors David and Topaz (arguably the most competent character in the film), passionately kiss, and you can visualize David saying, “Hail to the King Baby.” Cheesy? Unmistakably so, but in every way you sick horror heads will love. 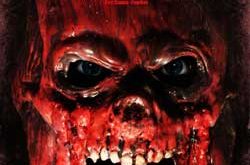