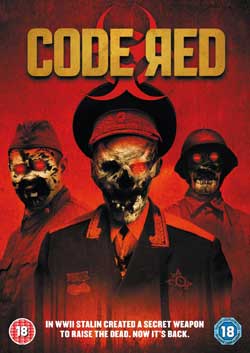 In World War II, Stalin created a top secret nerve gas, which went missing shortly after the Battle of Stalingrad. Over seventy years later, the horrific biochemical weapon resurfaces in modern day Bulgaria, turning the local inhabitants into frenzied mutants and causing the dead to rise from the grave. Amidst the chaos, US Special Forces Captain John McGahey (Paul Logan) and NATO Doctor Ana Bennett (Manal El-Feitury) must escape the infected zone before the Code Red alert is raised and everything is destroyed. Now it’s survival at all costs…

There is nothing wrong at all in being clear about your references, about waving a flag citing your favourite and most prominent influences. That is as long as you do something interesting with those references and create a film that contains some originality rather than being simply a parody of what has gone before. Unfortunately Code Red is too reliant on its more illustrious sources and is sadly a pale imitation of those peers. 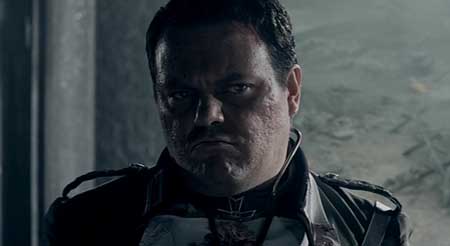 During The Battle Of Stalingrad towards the end of World War II Stalin unleashes his most horrific weapon on the advancing German forces. This weapon is a highly effective nerve gas that affects both the living and the dead, turning them into frenzied mutations desperately searching for blood. Over seventy years later this biochemical weapon emerges in Bulgaria, hidden in a secure bunker protected by a corrupt general but when something goes wrong and the gas is unleashed a Code Red is declared with troops moving through the town, destroying everything they find.

The opening of Valeri Milev’s film is possibly the most interesting part. The back-story follows lone German soldier Hans (Valeri Yordanov) as he struggles to escape Stalingrad following the deployment of the nerve gas. The remainder of the film seems too concerned with demonstrating how many genre films the makers have seen rather than making its own statement and this becomes as tedious as it is unimaginative. There are obvious references to 28 Days Later, Dawn Of The Dead and perhaps most tellingly the Resident Evil franchise. The problem is that Code Red doesn’t live up to any of these films and is left being just a poor imitation. The infected are neither overly frightening nor effective and seem to be relatively easy to dispatch with a little firepower. 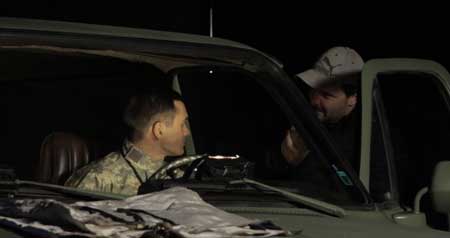 The biggest problems however lie in the performances and in the direction. Never does the cast really convince with Paul Logan’s John and Manal El-Feitury’s Anna offering neither chemistry nor conviction in lead roles that are simply too weak to carry any gravitas. As stereotyped and cliché-ridden characters they seem to blunder from one unfortunately repetitive set piece to the next making for episodic and inconsistent pacing. The direction could be described as random at best.

For the opening act it seems that Milev has tried to come up with as many different camera angles as possible without ever settling on a constructive or coherent way of conveying the narrative and this style becomes irritating very quickly. Later he seems to strive for atmosphere and suspense but there is little of either on display and the irritation fades into disappointing non-interest and weariness in yet another zombie-type film that fails to deliver. 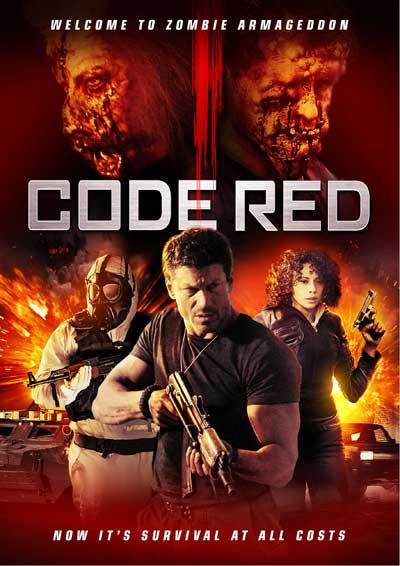 This last point is of key importance. There always have been and always will be films based around zombies or the infected. This is a staple of the horror canon but it is essential for filmmakers to find a new way of telling their story. The recent Frankenstein’s Army at least had some originality, even if it failed to follow up on its early promise, but sadly Code Red doesn’t even have that. What remains is a pretty dull affair with little to say. Productions such as the interesting and very low budget State Of Emergency built their stories around the characters themselves with the zombie-like creatures almost peripheral and television series The Walking Dead has shown just how much life you can get from the undead.

It wouldn’t be unfair to say that Code Red will probably disappear as quickly as it has arrived with little passing interest that will soon fade within the congested catalogue of failed zombie films. 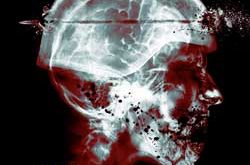