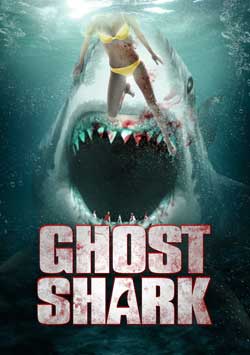 When rednecks on a fishing trip kill a great white shark, its spirit comes back for revenge, and soon turns its sights on the town of Smallport. Teenage Ava, her younger sister Cicely and friend Blaise witness the start of the ghost shark’s rampage but the authorities don’t believe their story. With the help of a crotchety lighthouse keeper named Finch the teens discover that the spectral shark can hunt wherever there’s water, and that the town’s dark past may provide the clues they need to defeat it.

ok, I have to confess something right now before I get started on this review – I freakin love Made-for-SyFY monster movies. Give me Giant Mecha Shark Face vs Plata-octopus and my butt is on the sofa, totally unable to look away.

I’ve actually seen this film several times coming into this review. I mean, it’s no Sharknado. But it’s everything I’ve come to expect from the genre.
So as the title suggests, the film is about a ghost…of a shark. it can turn up any where – bathtub, drinking fountain, your morning coffee – anywhere there’s water, there’s that ghost shark again. Hilarity ensues as the ghost shark takes it’s revenge for…well, whatever sharks take revenge for. 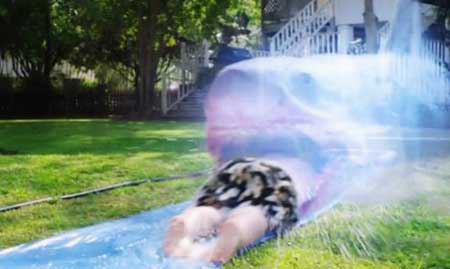 Although I kind of gotta back up Mr Shark on this one. Our story begins with a pair of redneck sport fishermen trying to win a competition by catching a gigantic fish. They get one on the line, but before they can reel it in, sharkie goes chomp. Game over. Understandibly annoyed, the fisherman shoots, tortures, and utlimately blows up the shark. The shark manages to survive this assault just long enough to swim away and finally die in a mystical cavern full of magic and mystery.

Turns out there’s some sort of evil hocus pocus in that cave. The spirit of the shark is ressurected as…say it with me…a GHOST SHARK to seek recompence against those who had wronged him. Which he does. All bloody and fast paced, cleaning house on the boat. However, our shark is careless and leaves a running video camera on the deck, with all the evidence of his crimes on the memory card. 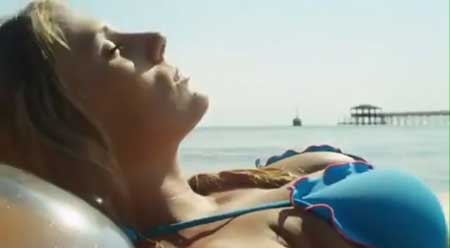 We find out later that the captain of the boat is also the father of two teenage girls, who are partying away with their friends. But our happy go lucky teens are about to have a really bad weekend. The blood spattered boat drifts into shore at the very beach where our heroes are hanging out, and the ghost shark isn’t far behind.

So the ghost shark runs amok throught out the town, showing up in ever increasingly ridiculous places, and getting his grub on.
From here we get to some of the expected “shark movie” imagery – air jaws style attacks on unsuspecting swimmers, blood in the water as the terrified people swim for their lives, confused looking beach dogs, you know..that sort of thing. 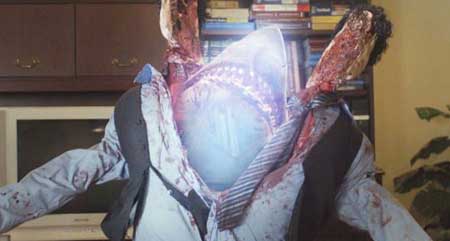 However, It’s the “how did a shark get here?” scenes that are the most memorable. Some of the really fun moments include – a plumber eaten through a broken water pipe, a shark infested slip n slide, a cheerleader pulled into a car wash bucket, and my personal favorite, a ghost shark pool party massacre. The aforementioned pool party scene, BTW, has the lamest effects I have ever seen. No, that’s not a mannequin head…seriously?

And let’s not forget the meat of the film – the ghost shark himself. I’ve seen worse CGI, but this is a million years from being the best I’ll ever see. Fortunately, because it is a ghost, the blending isn’t as bad as it could have been.

Commonly in films like this, there is a cameo/supporting character played by an actor pretty much past his or her prime but with good name recognition. In this case, we get Richard Moll. Most of you may know him from films like House and Metalstorm:The Destruction of Jared-Syn, but to me he will always be the lovable Bull Shannon from the 80s sitcom Night Court. His character, Finch, is some combination of Quint from Jaws and a villain from Scooby Doo. He skulks around a creepy lighthouse, all cantankerous and drunk, and tells anyone who will listen all the spooky folklore of the island. Not that anyone is listening. Even with that awesome “found footage” from the boat. 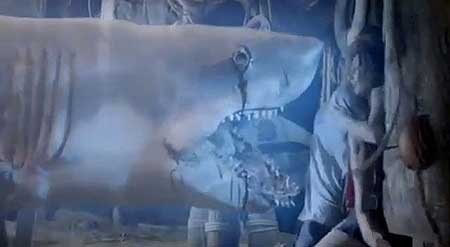 Not the mayor, played by Lucky Johnson (Treme, Dawn of the Planet of Apes) even though his own son is one of the people who saw the ghost shark.
Not the local constabulary,Sheriff Martin, played by Tom Francis Murphy ( American Horror Story, 12 years a Slave) who is utterly unconvinced that any of this is actually happening.

But the curator of the Maritime Museum is a bit more open minded. A really well executed scene, and a wonderful cameo from Robert Aberdeen (August Rush). Definately a highlight moment. Honestly, probably the best scene in the film.

And of course, what would any scooby doo adventure be without a group of meddling kids? Yup, we got them here too. Just a bunch of young people, out for good wholesome fun. Pretty much the character archetypes one would expect (the hot chick, the brain, the sporto, the party guy). The actors that make up the Clue Club have varying levels of experience between them. Everything from voice over work to walk ons and supporting roles in a wide range of productions. However, they all do a good job of selling it for the cameras, even if the script isn’t really all that challenging.

One of the group is played by actor Shawn C Phillips. Now I have to admit to some bias here. Shawn and I have known each other for a while. We worked together on an indie film a few years back. He has since appeared in over 70 films, including The Haunting of Whaley House, Girls Gone Dead, and Atom the Amazing Zombie Killer. Some of you may also recognize him from his video review youtube channel, as “coolduder”.

By the end of the story, it comes to Captain Quint and the Meddling Kids (hey! good name for a band. Called it!) to bring the horror to an end. Despite being arrested, harrassed, threatened, and really screwing up the mayor’s re-election campaign, our junior sleuths work hard to unravel the mystery and save their little town from revenge-seeking ghost shark-related doom.

so to sum up….awful CGI monster. Special effects that would make a film student cringe. Hot girls in bikinis. A well experienced cast mixed with fresh faced and eager newcomers. A script that really isn’t all that bad, comparably speaking. It’s not great, but not awful either.

If you are not a fan of, say Asylum Studios movies, then this may not be the one for you. If you really dig this sort of made for tv, low end horror/monster movie, then I think you will get a kick out of this one. I’m developing a drinking game to go with any future viewings (patent pending). 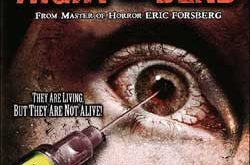 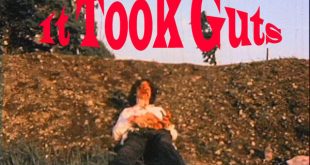 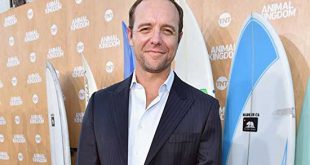