I’ve long believed that the French make some of the most f*cked up horror movies ever released (how about Baise Moi, Irreversible, Inside, Martyrs, In My Skin – to name just a few!) and Like a Doll – despite being only 5 minutes long – seems to fall comfortably into this idea as well.

The story itself is told with subtlety and much is left unsaid, but we are taken on the journey of a woman who is talking about how she murdered a man, giving us all of the gory details as well. We are never told exactly who he is, but as the film continues we are in doubt as to whether he was ever an actual ‘person’ at all, and perhaps ‘he’ was just a manifestation of something psychologically within her that she wanted to kill. The fact that she can slice someone up with a razor blade and bash their head in with a toilet seat, and then casually talk about it over afternoon tea, suggests a rather twisted psyche as it is.

Like a Doll is shot beautifully and the performance by lead actress (indeed the only actress in the piece), Pauline Helly, was spot on. I liked the mixture of different styles and thought that the contrast of these (from completely bloody, energetic ‘gore-fest’ moments, to brightly lit, static tea room moments and also twisted, atmospheric thriller moments). I even found myself re-watching the film because there is an underlying complexity to the storyline that definitely inspires the viewers to do some thinking for themselves.

I would be most curious to see some more of Joseph Catté’s work, as he definitely shows a lot of potential with Like a Doll. It is amazing to see how much he managed to tell a rather complex and unusual story with such limited resources. So, don’t be put off by subtitles, bite the bullet and give Like a Doll a chance, because it’ll certainly linger on your mind afterwards! In a good way. 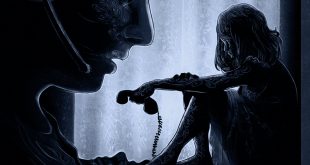