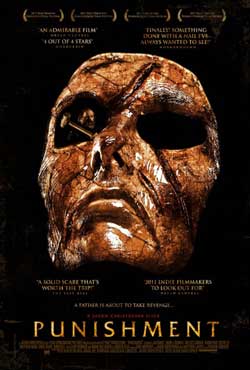 A group of college students escape their troubled lives but only to find themselves fighting for their lives from a revenge seeking mad man.

My first statement about this film must be regarding the title, as it seems to have a few! Although it was originally titled and promoted as Down The Road, it was changed to Punishment overseas. Then called Nobody Gets Out Alive in the US and Canada. In Germany it’s titled Slasher in the Woods. And even in Greece it’s called Terror In The Mask (?). Director Jason Christopher blames this on sales reps and I suppose you can’t blame a guy for wanting his movie to get out there no matter what – but it is confusing to say the least. I honestly don’t have a preference about which title they settle for, but pick one and stick with it! But anyway…I encountered it under the name Punishment and so that is what the review will be called.

Punishment opens with the tragic story of a daughter who is playing in the road but ends up getting run over by drunk drivers, right in front of her father’s eyes. Devastated by this, urban myth claims that he ran into the woods and continues to seek revenge on all of the college kids who come there to get wasted. Jump to present day and what do we have – a bunch of friends who are going to the woods to get wasted. Not exactly a complex story, as you can tell (apparently, Jason Christopher wrote it when he was just 17 years old). What proceeds is a fairly typical and uninteresting series of events where the friends get picked off one by one. I understand that Punishment is supposed to be an homage to the slasher flicks of the 70s and 80s, but is that any reason to make it so unoriginal and dull?

Ok, so first the good parts. I thought that it was edited moderately well for a low budget movie. The effects were good, and avoiding CGI for the most part was definitely in tune with the old school horror that they were trying to emulate. The idea wasn’t wholly bad – about half of the horror films out there have a similar plot, and I think that is main problem I have. Punishment added nothing new. It wasn’t trying the self-aware approach like Scream or The Cabin in the Woods. It didn’t make me laugh. It seemed to be religiously following the horror rulebook from decades ago, but we really have moved on from then. I mean, Scream used these rules too but also laughed about how dumb they are! 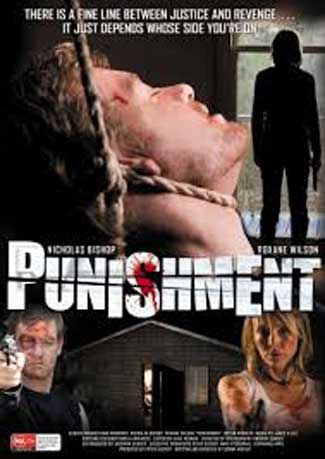 However, I didn’t really like the pacing of the movie. It seemed like nothing happened for ages and then there was practically just a montage sequence of most of them getting offed in 5 minutes. The beauty of horror has been relishing the kills, surely! We didn’t care about any of the characters because there wasn’t anything to them really, they were just a bunch of random people that we didn’t know. I also thought that the killer was a tad inconsistent, but I suppose unstable people usually are. Some people he murdered immediately with a quick blow to the head, and others he kidnapped, tied to a chair and tortured slowly. Or sometimes quickly. The ‘final girl’ (that’s how bad it is, I literally cannot remember anyone’s names!) managed to escape with only getting a few punches to the face and strangled a little bit, despite the fact that the killer had a row of nifty tools on his belt. And don’t even get me started on that huge speech from the killer where he inexplicably gives us his back story in an attempt to make us feel a little sorry for him – and apparently in an earlier cut of the film it lasted a painful 14 minutes! 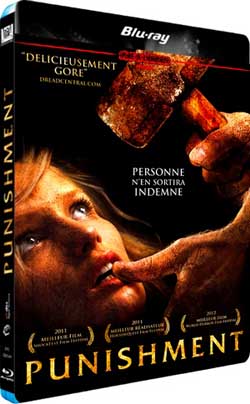 It is interesting to note that Victor Miller, writer of the original Friday the 13th screenplay, gave suggestions and mentored Jason Christopher when writing. It’s not hard to see a certain similarity between the stories though, is it? I personally find it quite unsatisfactory those stories where random people are ‘punished’ for the actions of others – the friends we follow in Punishment didn’t actually do anything wrong! At least in I Know What You Did Last Summer, the kids that end up getting killed were the ones who were dishonest in the first place. The entire film was shot in just 12 days despite the fact that an overwhelming amount of pre production went into it. On Punishment’s Facebook page, there is also a behind-the-scenes documentary that has been released in ten-minute parts (3 hours in total) which is always a neat idea. I feel that this always gives a closer look at the film, and makes you appreciate it in other ways. 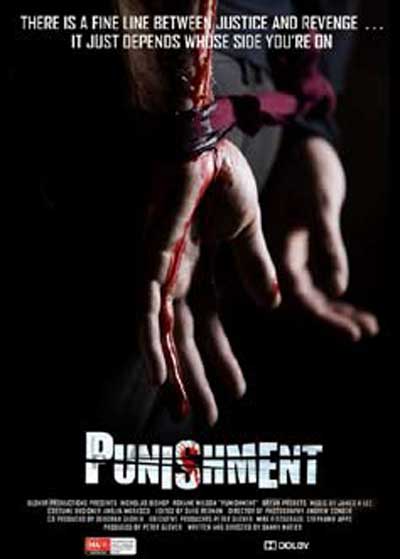 And there’s also been talk of a potential sequel, which I am somewhat apprehensive about (though isn’t that what the 80s slashers were famous for!), but maybe it’ll give Jason Christopher the chance to show everyone that there was indeed some hidden depth to Punishment. Or Nobody Gets Out Alive. Or whatever the hell it’s called. 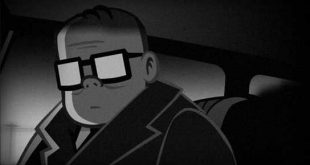