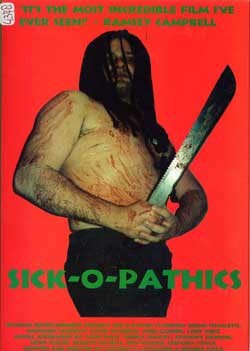 40 Minute short anthology featuring cameos from Lucio Fulci to Joe D’ Amato, in this wacky horror comedy who also is a love letter to the Italian Horror sub-genre

One of my favorite things about horror is, for the most part, there is a general sense of humor (albeit sometimes a gross one) throughout the genre, and all of us can share a good laugh about what we are into. I don’t think there’s another genre so excited about its own “bad” movies as to make them sought-after collectibles. We can collectively appreciate when special effects are done so poorly they’re almost embarrassing, and we approach them with a very Mr. Rogers-like “it’s the thought that counts” mentality. It’s when the genre is taken too seriously, when those involved aren’t able to look at what they’re doing with a smirk, that is when it starts to become less fun. So needless to say, I watched Sick-O-Pathics with a huge smile across my face. 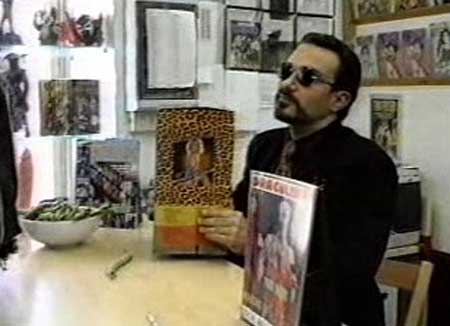 Brigida Costa and Massimo Lavagnini, two people with almost no other movie credits to their name, wrote and directed what is essentially the SOV Kentucky Fried Movie of low budget Italian horror films. And they apparently did so with the blessing of the very legends they were spoofing, as we see some familiar, normally behind the scenes, faces among the cameos. And it all starts with a wraparound story of dude (played by Lavagnini) walking down the street, pushing people out of his way. Along the path is a pile of dog poop labeled “Typical Italian Movie.” At this point, it looks like a Heiko Fipper movie, with the cartoon sound effects and over the top violence of Ostermontag. The guy follows a series of signs pointing toward a house, and on the door it says “Hellcome.” Inside is a man surrounded by movie props who says he is famous director Dare Dane (played by Dardano Sacchetti, writer of Demons, The Beyond, and many others), then rattles off a list of movies the dude has never heard. So the director knocks him out, ties him up, and forces him to watch his movies (is this where V/H/S got its premise?). 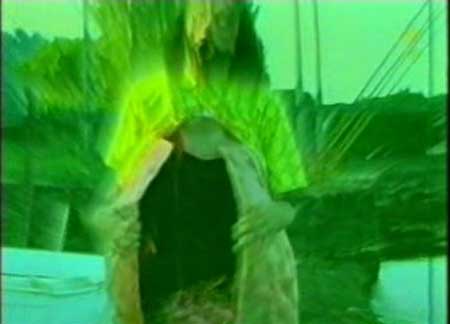 Sick-O-Pathics is set up like a Creepshow collection of shorts, but each one is very short, and they are separated by commercials. The first segment is called “Hello Dolly,” and revolves around a guy purchasing a blow up doll from his local comic shop, a shop that happens to be run by Mr. Sinister (played by effects master Sergio Stivaletti). The guy brings the doll home only to find it seems to be used, so he slams a bottle of booze and passes out. The doll comes to life, inflating itself and oozing some nastiness out of its rubbery orifice, followed by a snake-like beast that momentarily attaches to the dude’s arm. It pukes out some sticky stuff all over the guy, and traps him inside a cocoon. When we see a woman enter the same comic shop and look through a catalog of female sex toys, we finally understand what the contract from before entailed. 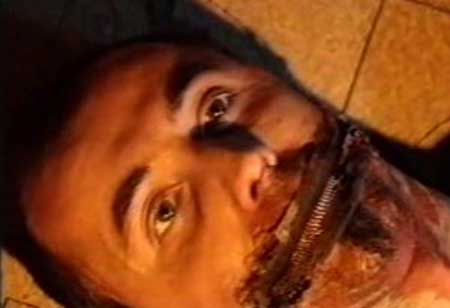 In “The Poor, The Flesh, and The Bag,” we are introduced to a guy who is having some bad luck. He owes money to some kind of crime boss, his girlfriend says they’re broke, and he doesn’t know where to turn. When walking into a store, he sees a woman who he recognizes as his neighbor (his other neighbors happen to be Joe D’Amato, director of half of all the sleazy movies you can think of, and 1970’s nunsploitation director Sergio Bergonzelli). The clerk says she forgot her bag, and so our down and out fellow tries to catch her, but she is too far away. He decides to keep the bag rather than return it, thinking maybe it’ll help his financial woes. But he can’t get it to open. That is, not until it opens its eye and sharply-toothed mouth and attacks after him. 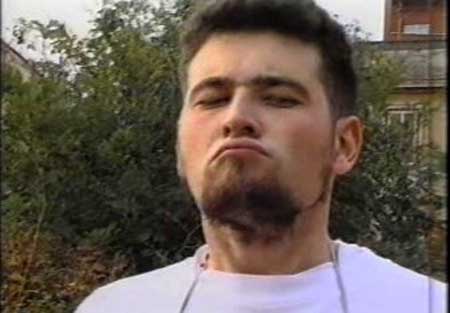 Finally, in “Aeropophagus,” (yes, a direct spoof of D’Amato’s Anthropophagus, and my favorite segment of the film) we watch as a girl and a shirtless guy walk through a town on what is labeled “a fake Greek island.” Once at the beach, he lays down to listen to music while she jumps in the ocean. She finds a life raft and swims to it, then screams as her flesh melts and she drowns. We see green smoke and hear fart noises, then watch as the man’s face melts off. Cut to present day, where a man is diagnosed by Dr. Loonies (played by David Warbeck of The Beyond and Black Snake fame) with coprophilia; he is obsessed with filth and crap. His treatment: time at a Greek island…together. After a goofy flight that includes a homeless man washing the mid-flight plane’s window and a lot of nose picking and vomiting, they reach their destination. But there is trouble; legend has it that a captain of a wrecked ship, who survived not by eating the flesh of his family, but beans, now terrorizes the island with his stinking gas. I a sequence that would make old Peter Jackson proud, the stinky zombie arrives at the beach, causing a pregnant sunbather (Antonella Fulci, Lucio Fulci’s daughter) to melt, her baby to be ejected from inside her with cannon-like force, only to be mistaken in a tree for a bird and shot by a hunter. Horrible, low budget, over the top effects and crude toilet humor make the entire segment hilarious and worth a watch.

For whatever reason, there are also commercials between the segments. While they are very short, look for cameos from Lucio Fulci, Rick Gianasi (Sgt. Kabukiman, NYPD himself), Luigi Cozzi (director of Hercules (1983), Contamination, and Starcrash), and everyone’s favorite living dead, Linnea Quigley. Like I mentioned before, it’s nice to see some of the big names goofing around and having fun. 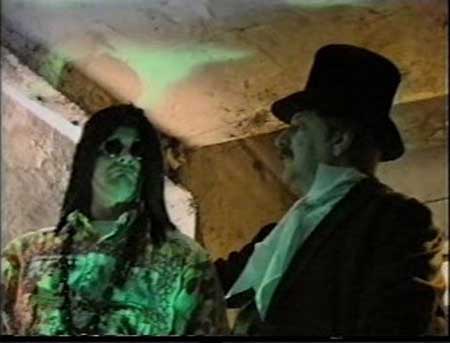 Overall, Sick-O-Pathics is exactly what you kind of expect it is. It is super short, coming in around fifty minutes or so. It is a low budget, shot on video, goofy movie that has cheap effects (at one part, I’m pretty sure a split open chest was just an open cardboard box covered in red goo) and mediocre acting. But isn’t that exactly how you want it? You kind of get the feeling the directors wouldn’t have it any other way. It isn’t amazing in the way a movie like Suspiria is amazing, but more in the way that Student Bodies is. If you like Andreas Schnaas and the German splattergore movies, or Joe D’Amato films, or even films by the Zucker brothers, find this movie.