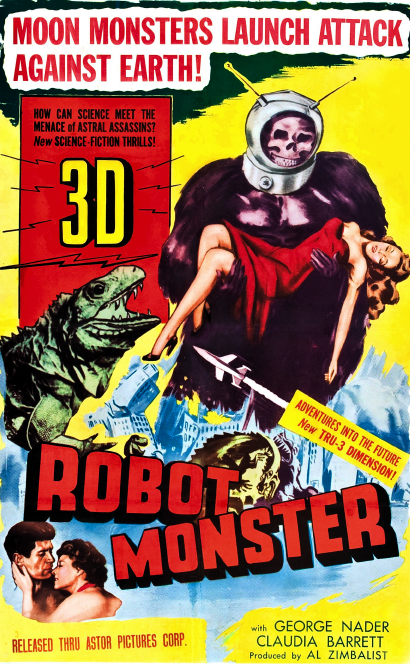 “Ro-Man, an alien that looks remarkably like a gorilla in a diving helmet, has destroyed all but six people on the planet Earth. He spends the entire film trying to finish off these survivors, but complications arise when he falls for the young woman in the group.” (courtesy IMDB)

REVIEW:
I’ve been up to my coccyx in letters asking for more apocalyptic End-Of-The-World cinematic experiences. At least I think that’s what they were asking for – the writing in the letters was really quite small and I didn’t have my reading glasses on. But working on that basis I chose this week’s review, the second-worst film ever made, the amazing, the infamous, Robot Monster (1953)! It’s made with such breath-taking incompetence that the end result provides more laughs than a Marx Brothers comedy, and if the dinosaur sequences appear to be well-done, it’s only because you’re watching stock footage lifted from One Million Years BC (1940). Robot Monster was made in 1953 on a tiny budget of US$20,000, and was the first science fiction film ever to be made in 3-D. I predict that you will be strangely entertained, and certain lines of dialogue will leave you dumbfounded.

It was directed by Phil Tucker who, in the early fifties, made a series of cheap cheesecake sex pictures. Surprisingly, this was not a useful training ground for directing quality mainstream films, although these influences might be seen in some of Alice’s actions. The opening titles sequence contains no credit for continuity. This is one of several pieces of evidence leading me to suspect Phil Tucker saved money by not bothering. Much to everyone’s dismay, Phil did manage to work again after Robot Monster, making such films as Dance Hall Racket (1953) with his comedian friend Lenny Bruce. None of his other movies ever found an audience, but Robot Monster has won him a dubious place in cinema history. 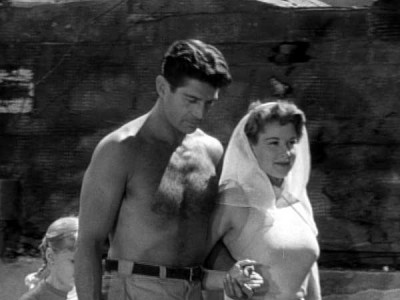 Alas, distinguished thespians are not to be found in the cast, although George Nader who plays Roy, went on to become FBI agent Jerry Cotton in a series of German movies during the sixties before retiring in 1974 to write Science Fiction and Detective novels with a decidedly, um, gay bent. I’m sure he enjoyed playing Roy. 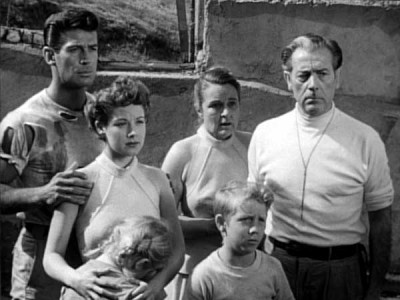 The only part of the film which they might have done worse is the choice of score composer Elmer Bernstein. Robot Monster is near the beginning of a long career creating memorable music for films like The Magnificent Seven (1960), To Kill A Mockingbird (1962) and The Great Escape (1963). He was nominated for nine Academy Awards, finally winning an Oscar for Thoroughly Modern Millie (1967). 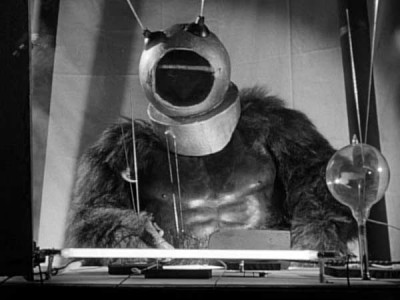 Phil had intended to utilise a more conventional robot suit for his science fiction opus, but that plan was felled by the low budget. George Barrows, one of several men in Hollywood who earned a modest living playing apes in the then-popular jungle movies, came to the rescue. He owned his own suit and was paid forty dollars a day. All the director had to do was put a fake divers helmet on his head and, sim-sala-bim, we have a dangerous extraterrestrial! It must be said that George rose to meet the challenge of two roles, playing the Great Guidance Ro-Man as well. Talk about diversity! But some of you might say the true credit rightly belongs to John Brown, who did the voices. Well, who ever is responsible, only the most callous viewer could remain dry-eyed while watching Ro-Man grappling with his dilemma. He must, yet he cannot! It never fails to bring a tear to my eye…socket. 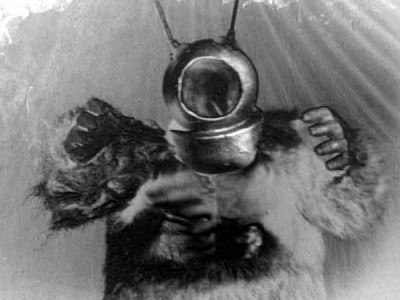 I’m reluctant to start mocking Robot Monster, for fear I won’t be able to stop. The science presented in Robot Monster is positively inane, even French Literary Theories make more sense, and unless I’m very much mistaken, that’s a V2 rocket that destroys Space-Platform-On-A-Stick, which must mean Ro-Man is in cahoots with Werner Von Braun! Now that his involvement has been discovered, it’s evident that Werner Von Braun has worked for all three of the twentieth century’s greatest menaces to humanity. The Nazis, the USA, and Robot Monster! What an unethical mercenary cad that man was! 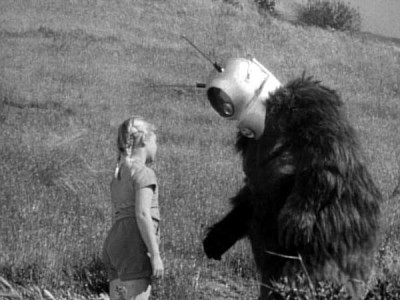 As it turns out, the bulk of the film is actually little Johnny’s dream. What would my old friend Doctor Freud have to say about this? Johnny dreams of the entire human race being exterminated, of little sister Carla being murdered by a large gorilla, of elder sister Alice dallying with Roy, of Alice being tied up by Roy, of Alice tying herself up to arouse the gorillatron who abducted her. Sigmund may well have concluded that little Johnny is one sick puppy. And remember, the first thing he says when he meets the archeologists is “You must die!” You may think Johnny is just a cadet existentialist, but I suspect he’s going to become the sort of teenager you wouldn’t want to be attending high school with. 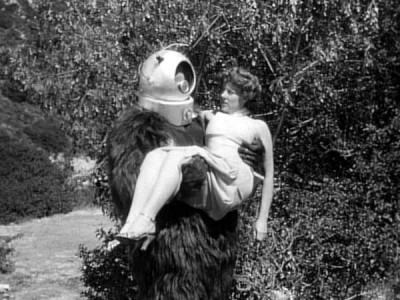 I also worry for that family living in the exposed basement, or to use it’s proper name, a hole in the ground. I’ve heard that it never rains in southern California, so at least they won’t be flooded out, but I hope the professor’s experimental drug also protects against skin cancer. But hang on, there’s a perfectly good building with walls and a roof nearby, it’s quite visible when Johnny and Ro-Man are having their conversation. Perhaps living in a hole in the ground is just a lifestyle choice. Bloody Hobbits. 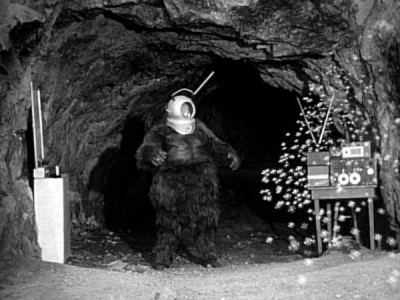 It’s difficult to understand the value of the Billion Bubble Machine. What precisely does it do? I’m sure it would be a source of irresistible fascination for Ro-Man’s cat, if he hadn’t exterminated them all, that is. Speaking of which, do the children have a death wish? Both Johnny and Carla stand still and allow Ro-Man to catch and kill them. When searching for adjectives to describe Ro-Man, Nimble and Agile don’t come to mind. Ro-Man’s repeated walking up and down that hill might be part of an exercise program, he could certainly stand to lose a few Ro-kilos. 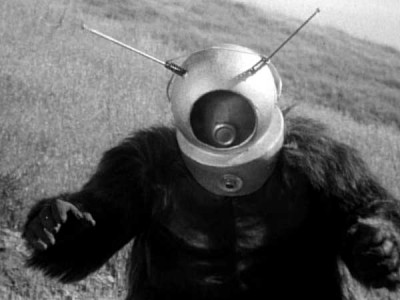 And then there’s the dialogue! One of my favourite lines is “You’re So Bossy, You Ought To Be Milked Before You Come Home At Night.” Most people have a hard time responding to that one, and it’s hard to imagine any circumstances in which an adult could write such dialogue. It’s best not to try, That Way Madness Lies. Indeed, a friend of mine once compared Robot Monster to some films by David Lynch, where you think he’s telling one story, only to discover that all along he’s been telling you a different story. We put him away for his own protection, poor man.

My own theory is that the key line of dialogue is near the start of the film, when Johnny says “He Looks Like One Of Those People I Saw Last Time I Was On Pluto.” For Pluto, read LSD. I suspect little Johnny was in one of those LSD tests that sinister government agencies conducted on people back in the fifties, and his post-luncheon dream is actually one of those acid flashbacks I’ve heard tell of. It all makes perfect sense now…as much as anything else. Now that I’ve solved that mystery for you, I’ll bid you farewell and look forward to your company next week when I have the opportunity to freeze the blood in your veins with more sickening horror to make your stomach turn and your flesh crawl in yet another fear-filled fang-fest for…Horror News! Toodles! 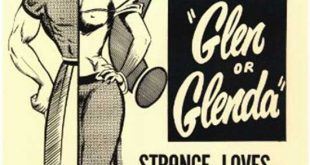 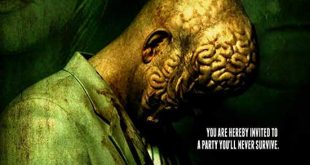 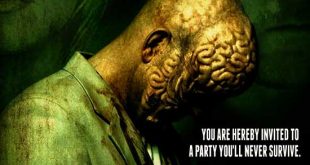 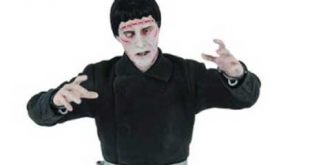