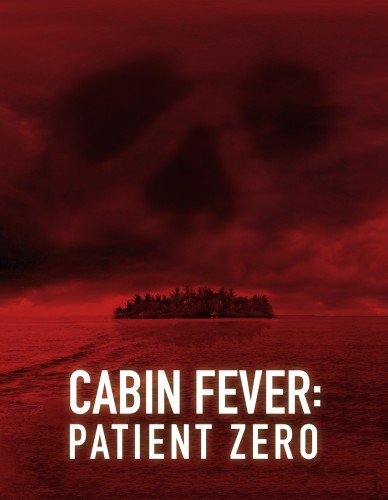 Marcus’ best friends plan a last minute bachelor party getaway to a remote island. Instead of a night of drinking and partying, the group encounter a deadly virus that consumes their flesh. Desperate for help, struggling to survive, they discover a research facility tucked away on the island and a mysterious man named Porter who may very well be…patient zero.

Eli Roth is responsible for unleashing the gore soaked franchise Cabin Fever with the first film in 2002 launching the series and his career. Twelve years later, accomplished comic artists turned director, Kaare Andrews, delivers the latest in the flest eating virus films, Cabin Fever 3 Patient Zero. Taking place on a remote island, sometimes within a sparsely populated laboratory, it stretches the “Cabin” elements while holding tightly onto the “Fever” tinged grosser visuals. This film is gruesome with oozing sores, exposed bone, and vomit: tons of dark, red, disgusting vomit. Sean Austin steps into the role of Mr. Porter, the sole survivor of a controlled outbreak and immune to the virus, even though his wife and child fall victim. He is patient zero giving the role a sympathetic but not entirely innocent flavor. His adversary is Dr. Edwards (Currie Graham) a real douche-bag, a manipulative, self-serving scientist out more for personal gain than saving the human race. The scripts litters its plot with gore, blood and repulsive effects hiding many of the cliches and contrivances behind a wall of crimson.

After a stylish, impressive pre-credits introduction to Potter (Sean Astin) and the scientists in the secret lab, the film shifts its focus away from another potential outbreak to a small group of friends preparing to celebrate a family wedding. The trio of trouble makers, Dobs (Ryan Donowho), Josh (Brando Eaton) and Penny (Jillian Murray) whisk away the groom, Josh’s brother Marcus (Mitch Ryan) to a secluded private bachelor party on a remote island – the same island where Dr. Edwards (Currie Graham) is studying patient zero. As Potter attacks an orderly causing a 48 hour lockdown of the facility, the four friends strike up camp on the beach where, after a brief scuba dive, Penny begins to break out from a mysterious rash. The rash quickly turns severe and the boys head to the facility for help. Then things go south very quickly for everyone.

Director Kaare Andrews handles the material with a promising but somewhat mitigated flair. There are times that his works really stands out, especially the beginning. Much like he did in his previous film, Altitude, he handles the close quarters with a combination of clarity, confinement and claustrophobia. The scenes on the boat traveling in are well shot and well paced as are the tonally different shots within the facility where Potter is confined as is, later, Dr. Edwards. He deftly handles the action where Marcus and Dobs must survive the violent virus ridden scientists as they navigate their way through the darkened facility searching for Dr. Edwards and, hopefully, a cure. Later, when the infected nurse, Bridget, escapes only to encounter the equally infected Penny at the getaway boat, Kaare shines as the two gore-gore girls fight bloody fist to bloody fist on the beach. While he never truly achieves an emotional tie to any of the characters, not Potter nor Marcus (in fact it is Camilla – Solly Duran – who gains the most sympathy), he injects the film with an immense sense of b-movie fun – drippy, gooey, gasp-in-horror entertainment.

Sean Astin is memorable as Potter as he steers and manipulates his surroundings all confined to a sealed enclosure, slamming his virus blood all over the windows, yelling out a nursery rhyme. It a controlled mania that is intriguing. He give the film a powerful, implosive performance. He is quiet and controlled when he needs to be, weepy and sorrowful when it serves his needs and outright mad when it comes time for him to strike. Some of the best scenes are within a collage of snippets explaining just how he did what he did to spread the virus. Even when he is at his most evil, there is still a sadness in his eyes that allow him to remain the hero of the film.

The rest of the cast is up to the task of filling in a b-movie, gore-fest. Unfortunately the trio of guys setting out for the bachelor party are not likable in the least. They are just extraordinary boring, dull characters. Mitch Ryan succeeds the best as Marcus but the character never gets the opportunity to become the true hero the script wants him to be. A little too whiny, even when he is saving the day. Currie Graham is terrific as the “mad” scientist, Dr. Edwards giving the role a healthy amount of sleaze. But it is the female cast that really stand out: Jillian Murray, Solly Duran and Lydia Hearst. Jillian outshine most everyone as Penny bringing a seductive charisma and beauty to her role, even when she is in full infected mode. Solly Duran is the only one that gets to display any true emotion as the moral core of the film. Lydia starts out overshadowed by Currie Graham and Sean Astin only to earn attention later after she is turned into a gore-soaked monster toward the end. Her fight with Penny is the highlight of the film.

With a film about a flesh eating virus, it is the gore and special effects that are attracting most viewers. Kaare Andrews’ FX team delivers the bloody goods with Cabin Fever 3 Patient Zero. Effects artist Vincent J. Guastini leads the team to some seriously stomach-turning gross outs. Flesh is ripped off limbs, bloody vomits flies through the air over everything, bone and teeth are exposed and zombie like infected are covered in goo. The film is sick. It even has some outrageous, bizarre gags that are Guastini’s signature from earlier films like Silent Night and Sushi Girl. Cabin Fever 3 Patient Zero will no doubt delight gore fiends.

Cabin Fever 3 Patient Zero is a solid entry into the series even if it seems to have very little to do with the first two films, outside the flesh eating virus itself. Kaare Andrews displays a promising talent as the film’s director especially when the action kicks in. Vincent J. Guastini paints the screen with bloody, disgusting gory goo, the film drips in gore. The film is hindered, however, by a group of characters that fail to make an impression or draw the sympathy from its audience. They are bland, boring characters or over the top silly characters thrown into a disturbing, outrageous plot and the film has trouble deciding if Sean Astin’s film should be the hero or the villain from scene to scene. Luckily the gore wins over for the most part making Cabin Fever 3 Patient Zero a bloody good b-movie blast standing on the strength of its grisly special effects. A worthy addition to the Eli Roth’s Cabin Fever franchise.