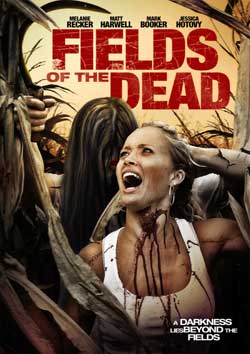 Seven friends find themselves on an isolated farm. Here, they discover an ancient book, which summons demons from the surrounding woods. Now, these friends will have to find a way out of the fields, if they want to survive.

I have no particular beef with blonde women.  In fact, I’ve dated one or two in my lifetime.  My sister is flaxen-haired, and she’s my favorite person on the planet.  What does draw the ire of yours truly is when a film maker casts two females who look nearly identical in roles that bear little distinction from one another as a result of either poor writing or bland acting.  More often than not, a combination of both perpetrations is at fault.  In nearly every instance, the ladies in question are blondes. 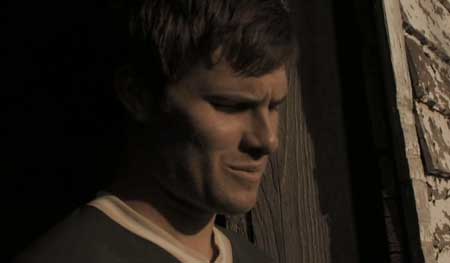 This particular malfeasance is merely the tip of the proverbial iceberg of problems “Fields of the Dead” boasts, and coincidentally the only one it manages to correct (one of the girls is snarkier) at some point in its duration.  Made on a shoestring budget, our latest offering begins with the promise of “Evil Dead” shenanigans that it never delivers upon, keeping the viewer in its lurch desperately awaiting the arrival of any damn thing to occur.  By midway through, I would have been pleased as punch with a musical number to break up the monotony, and I normally prefer a root canal over the likes of “Rent” on any given day of the week.  The most aggravating and confounding thing about this film is that it isn’t nearly as awful as everyone involved seems to believe it is.  Allow me to explain. 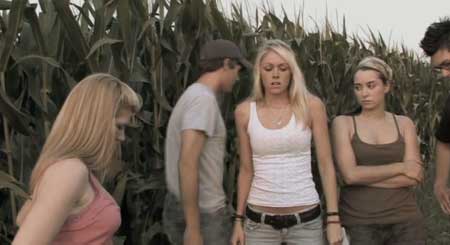 Murder is afoot before the credits roll, as actors not strong enough to be cast in leads annoy us at a campfire for a couple of minutes before one offs the rest with a machete in the adjoining corn field.  If you’re contemplating the how and why of such a readily available weapon, I’m willing to bet you’ve never watched a horror movie in your entire existence.  Probably not the best idea to start with this one.   Despite offering nothing in the way of set-up or exposition, this brief sequence is handled well by director Daniel B. Iske, and a glimmer of hope given the utter pointlessness of it.  Also to the feature’s credit is that these characters aren’t remotely interesting enough to eclipse the true stars, a mistake the “Friday the 13th” remake never quite recovered from after its corker of a beginning. 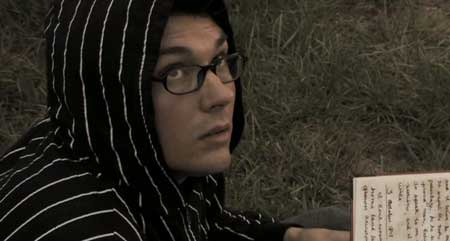 Not that the main players are a barrel of monkeys themselves, mind you.  Led by uptight Trent (Mark Booker), seven college students set up camp at the abandoned farm that played host to the unfortunate opening victims to embark on a research project into the mold that is threatening the surrounding crops.  Consisting of the aforementioned rejects from a Doublemint commercial and other conventionally good-looking young adults that I may or may not get around to mentioning at some point, we’re subjected to the standard wiseass remarks and lecherous flirting that strain to amuse.

Trent regales the others with the property’s dark history around yet another fire complete with yet another guitar strummer whom I suspect is playing the exact same acoustic from before.  The muddled tale, involving a pilgrim who ritualistically slaughtered his wife and son, is made no more intelligible when dreamt about in detail by latent lesbian Cheryl (Mel Recker) later that night. It does, however, offer declaration that in no uncertain terms are these spirits at rest and circumstances are about to get hairy for the antagonists. 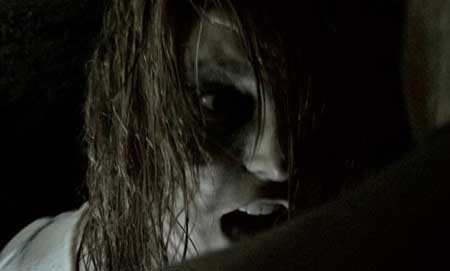 Except they don’t.  More specifically, it feels as if nothing really happens at all in “Fields,” though Iske and screenwriter Scott Coleman waste little time before mounting strange events and erratic behavior from Cheryl.  The murdered wife’s journal, containing passages in both handwritten prose and modern typeface depending on the camera angle, is discovered by geeky Josh (Matt Tatroe) amongst the rows as hushed voices babble gibberish (another trope that is growing tiresome) about their story being told.  One would suspect insight from these entries, but they fail to shed any light whatsoever.  Josh’s palpable unease as he reads them is the only verification that we’re listening to something other than a whorish farmer chick’s confessions.

A figurine indicative of naught is unearthed from beside the field, and soon Josh is drawn to the barn where he spots a possessed, wide-eyed Cheryl and ghosts clad in Thanksgiving costumes.  She hacks him up with the machete (must have found that next to the guitar) as the entities watch on expressionless like the afterlife’s most boring cheerleading squadron.  The following day, his disappearance is explained away to Trent as an impromptu hike, an excuse that holds water well into nightfall. 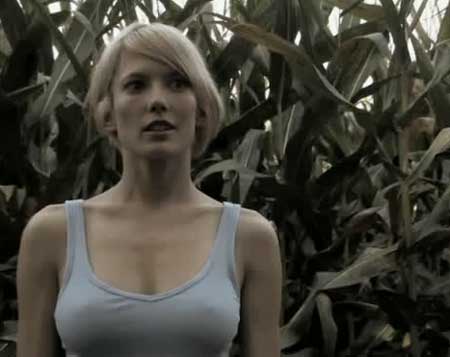 Right about the point when Linda (Chelsie Hartness, the easily irritated blonde) stumbles upon a bloodied scalp that is written off as a dead possum is when the inherent flaws prevalent in “Fields” reach the point of no return.  Nothing works, yet it all comes so very close to effective genre material, the result is maddening.  Iske shows a keen eye for atmosphere behind the camera, and he is backed by performances (Matt Harwell stands out as comic relief Alex) that rise above Coleman’s clunky script.  Unfortunately, every facet is handled and presented as disposable garbage, which becomes the film’s sole objective.  In that lonely respect, mission accomplished. 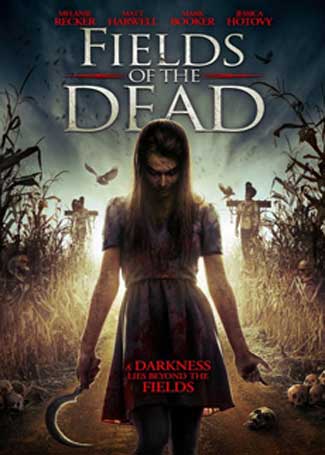 Possibly the most damning evidence against “Fields of the Dead” is the fact that it was previously released in 2008 under the title of “The Wretched.”  That’s correct, friends.  Production company Ruthless Pictures has repackaged a past failure six years later under a different title in an attempt to pawn it off as a new product.  Even IMDb has two separate links, unwittingly adding to the charade of originality.  Perhaps the third time will be a charm.  The second sure as hell wasn’t.

In the end, both the audience and Cheryl are left with a simple query, posed by one of specters:  “Do you understand now?”  No.  No, I do not.  Nor do I wish to. 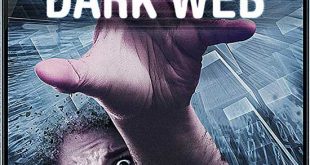