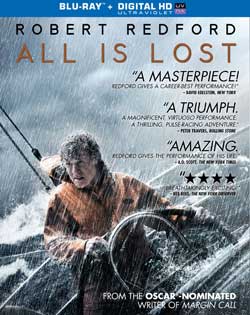 After a collision with a shipping container at sea, a resourceful sailor finds himself, despite all efforts to the contrary, staring his mortality in the face.

Robert Redford takes on the single starring role of a man lost out to sea. The film “All is Lost” is a survival film that features Redford in a speechless performance battling the pains of the ocean. We get a brief peak into his life per his opener goodbye letter which suggests that he failed those who were close to him. Now 1700 miles deep into the Indian ocean located in the Sumatra Straights, we find him alone with his yacht.

Our film begins with a single shot of a boat overturned. Aware of the film’s final act before the story even begins, the film gives us a foreshadow of the outcome. Though in the style of past reflective films, we are then taken back 8 days prior when all was still, calm, and controlled.  Robert who’s character name is never revealed is on an extended outing in his boat the “Virginia Jean”. We assume he is been at sea for some time due to the distance he has already covered, though when and why is only hinted at.

Upon awakening one morning he discovers that his boat has collided with a discarded foreign shipping container left out to sea. The collision breaks a hole into his boat resulting in the lower deck slowly filling with water. From this point on it’s a exercise in ingenuity and resourcefulness. Robert, (who I’ll refer to due to lack of character name) spends the next 8 days battling all sorts of ocean hardships that range from storms, to boat troubles, to even the trying to ration out food and water. As he breaks open a navigation kit he teaches himself to track where exactly his current location is and presumed destination. Hopeful to the ocean “shipping lanes”, Robert assumes that he may have a chance as the container ocean liners travel back and forth. 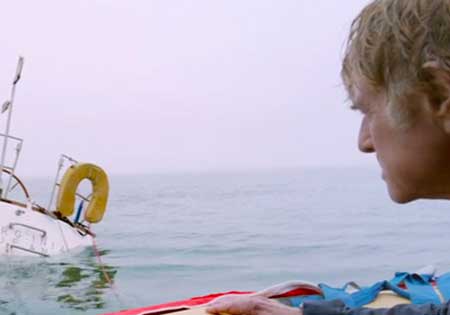 Already receiving critical acclaim, it’s hard not to give this survival film the merit it deserves. For one, Redford exudes a believable performance that arrives in his ability to almost effortlessly present distress, exhaustion, and worry in tune with the rhythm any man in this situation would have to ordeal. The camera stays with Redford thru the entire performance without the aid of any additional actors. 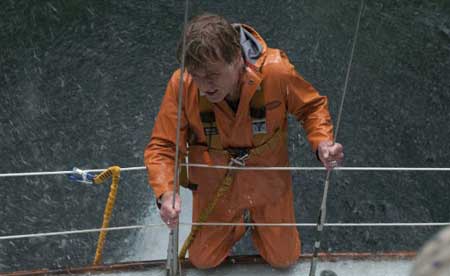 Redford embraces the simplicity of the film which on most parts is a linear experience that knowingly is directed to either surviving it, giving up or facing the reality of lost hope and death. What works here is that we are fully engaged in this experience to the effect of nail-biter series of events. Usually the thoughts of ..”I might try this” , are eventually addressed to the strength of the character who does what he can to make the best of resources and weather conditions. 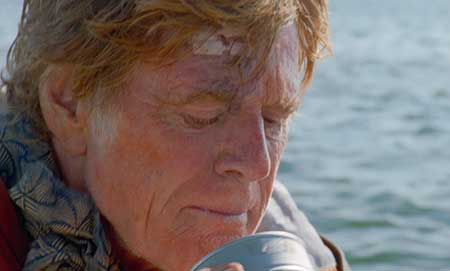 The film of course is made believable with its realistic setting, though savvy viewers will recognize that to film such an event requires a large water tank studio. This aspect is never questioned due to the glory of modern filmmaking and fx work. Reports indicate that the film was shot a Baja Studios in Rosarito Beach, Mexico using the same set designed for the film Titanic. Facts indicate that the script itself was only 31 pages leaving very little in the way of dialog spoken during the performance. However, the beauty here is that Redford is able to communicate his situations easily with facial expression, body language and a few murmurings between. 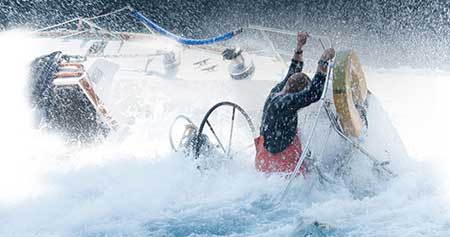 “All is Lost” was directed by J. C. Chandor now on his second film after his debut release “Margin Call”. The film was well received adding to the professional talents of the film’s 1 actor. “All is Lost” is a powerful film with a powerful performance. It keeps its direction in perspective to the realism as of the sea’s distress and challenges that one might face. I call this a recommended viewing to anyone who might consider taking on a sailing challenge themselves. In short, be prepared and stock your boat for any situation that might arise. Great film 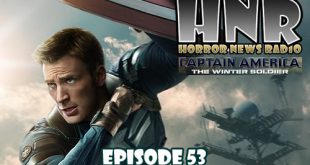