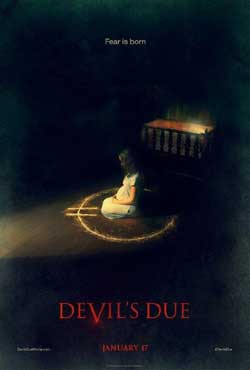 After a mysterious, lost night on their honeymoon, a newlywed couple finds themselves dealing with an earlier-than-planned pregnancy. While recording everything for posterity, the husband begins to notice odd behavior in his wife that they initially write off to nerves, but, as the months pass, it becomes evident that the dark changes to her body and mind have a much more sinister origin.

I was hoping against hope that maybe…just maybe Devil’s Due would be the movie to go against the grain and be a good horror film that gets released in January. I understand that the first two months of every year are usually the dumping ground for movies that studios know are steaming piles and what they do is spend a nice chunk of change on promoting the hell out of them for a few weeks prior to their release and hope to get a decent opening weekend for their trouble in trying to make this stuff look good. A great example of this is The Devil Inside (2012) which stunk like a cheap hooker after working convention week in Vegas but only cost $1 million bucks and made over $30 million on it’s opening weekend. It sucks that we still fall prey to movie scams like this but I think all of us secretly have hopes that we might get lucky one of these years. 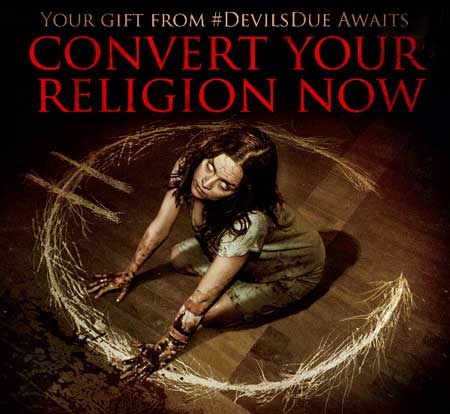 But it’s my job to try and divert you from spending your hard earned smackers on absolute crap like Devil’s Due, the latest effort from directors Matt Bettinelli-Olpin & Tyler Gillett (AKA: Radio Silence). And I’m afraid I must insist on all of you staying as far away as possible from this astoundingly awful 90 minute snoozefest in which nearly nothing happens at all for the majority of its running time. Besides its two leads (who try their best to make this mess palatable with some good performances) there is nothing – NOTHING going on here worth your money. 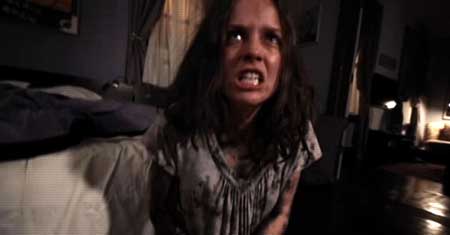 Allison Miller & Zach Gilford play newlyweds Allison and Zack McCall who (After a short intro featuring Zack in a interrogation room) get married and go on their honeymoon in the Dominican Republic. It’s established that Zach wants to capture their every waking moment on video for their future so that’s exactly what he does, capture their every waking moment as often as he can. He videos everything including the evening that Allison decides to visit a fortune teller on the night before they are scheduled to leave. The fortune teller gets a really bad vibe off of Allison, intoning “They’ve been waiting for you” over and over as she doesn’t let go of Allison’s arm until Zach intervenes. He also films the moments afterwards where they find themselves hopelessly lost when a cabbie picks them up & insists that they join him at a underground club where Allison consumes drink after drink until she (& Zach) pass out, then they’re dragged to a chamber of sorts where a diabolical procedure takes place on Allison. They both wake up in their hotel beds the morning after not remembering how they got there but feeling good otherwise. 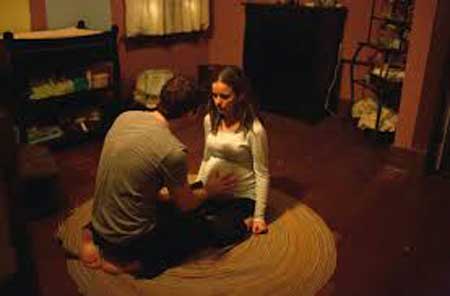 Allison discovers that she’s pregnant a short while after returning but seems a bit flabbergasted because she religiously took her birth control pills, but they both revel with the news that they’re going to be parents soon. And that’s when things go downhill for them (things started going downhill for the audience as soon as the movie started) because that procedure I mentioned in the previous paragraph was one in which Allison is impregnated with (Cue scary orchestral music)…THE ANTI CHRIST!! And she slowly begins to change.

The key word in that last sentence is “Slowly” because Devil’s Due takes it’s sweet time in getting going and it fails miserably in doing so. As a matter of fact this might be one of the most pointlessly slow movies I’ve ever seen. I understand getting to a little bit of backstory and trying to make the audience feel some sort of empathy with the main characters but damn! I’ve watched molasses flow down a frozen sidewalk faster than this movie gets itself going. And the only reason I had any hope of anything good eventually happening was because of the winning performances from Miller & Gilford, who really try hard to elevate the moribund script (By Lindsay Devlin) into something scary. But they threw themselves on the proverbial grenade for naught because no actor, dead or alive, could put a sheen on this dull, droning & stupid script. 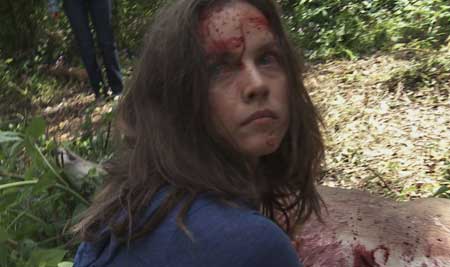 Dull & droning you can understand, but why stupid you ask? Devil’s Due is another example of a found footage film that has plagued bijous for the last decade or so (give or take). All films of this genre rely on convincing their audience that somehow the characters have managed to believably record their adventures under extreme duress. And since this footage is usually shot with a handheld camera the images on screen are usually bouncing up & down in a really annoying fashion. Editing is slipshod as well since the audience is supposed to believe that it was all shot on the fly. But Devil’s Due does something so stupid (Besides going into production that is) that it’s actually insulting to it’s audience! It forgets the main tenet of the found footage genre: The footage is supposed to be from one source (a memory card for example) so as to add to the authenticity of the subject matter. Devil’s Due consists of footage from various sources and edits it together essentially destroying any semblance of amateurism and believability. It even edits in footage shot from hidden camcorders that neither Zack or Allison know are hidden in their home (placed there by the bad guys who are monitoring the gestation of their little antichrist to be) completely destroying the one trope that’s supposed to make it a found footage film! 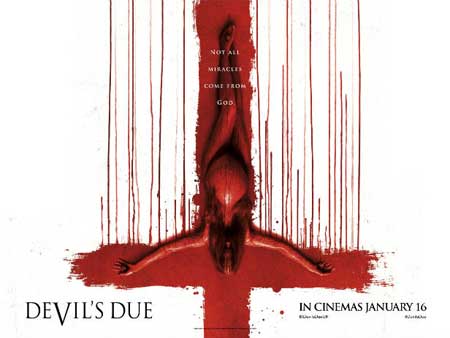 Radio Silence were responsible for the final sequence in V/H/S/ (2012) which featured a house going all kablooey at the end and they pull the same rabbit out of their hat in the final minutes of this film as well. Somebody should’ve told them that it’s already a tired bit that’s not scary in the least. And their dubious editing choices do nothing to liven up an already derivative story. They’re a talented group for sure but Devil’s Due does nothing to make me want to see whatever they come up with next, it’s a film that doesn’t deserve the theatrical release it’s received and an obvious cash grab that, quite frankly, I’m getting sick and tired of it. 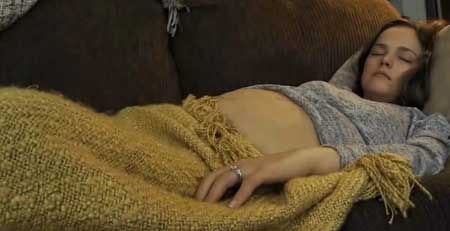 The only way to stop the powers that be from releasing tripe like this is to ignore it. I have to watch this stuff (It’s why I make the big bucks) but you don’t. Stay away from Devil’s Due, save your money, plant a tree, help an old lady cross the street…do something positive with your time. All you’re gonna get from watching this film is an overwhelming sense of regret & sorrow (You might get some sleep too but that’s not what you go to the movies for…is it?).