Home | Bill Oberst Jr. Updates Us On CHILDREN OF SORROW

Bill Oberst Jr. Updates Us On CHILDREN OF SORROW

One of the films I’m looking forward to seeing is the new one from the “one man horror film machine” Bill Oberst Jr. It’s titled CHILDREN OF SORROW And LIONSGATE and AFTER DARK FILMS Will be giving it a proper release in just a few months. Bill took to FACEBOOK to give us all an update and I thought you all might want to share in the info.

“Children of Sorrow release 2 months from today from Lionsgate Home Entertainment and After Dark Films. Jourdan McClure directed from Ryan Finnerty’s script. If the character I played (“Father Simon”) works, I give credit not only to McClure, Finnerty and my ensemble castmates, but also to Costume Designer Katie Elhoffer, whose loose, earthy wardrobe design for the cult leader provides a perfect visual counterpart to the darkness within him.”

Here’s the really chilling trailer that’s been around for a while. This one looks like a real creeper…

So, we’ve got a DVD release date of March 4th, here is what the official press release has to say about things:

From screenwriter/director Jourdan McClure (Die, Maniacs, Die!) and screenwriter Ryan Finnerty (TV’s “Smosh”), the duo behind Rogue River, comes the terrifying thriller Children Of Sorrow available on DVD (plus Digital Ultraviolet), Digital HD and Video on Demand March 4th from Lionsgate Home Entertainment. Winner of the “Best Film” and “Best Actor” award for Bill Oberst, Jr. (Abraham Lincoln vs. Zombies) at the 2012 Shockfest Film Festival, TwistedCentral.com also celebrated Children Of Sorrow in their review, noting “forget jump scares and things that go bump in the night, this is how real horror is done.” Children Of Sorrow will be available on DVD for the suggested retail price of $26.98.

Simon Leach is a very sick man. Thriving on despair, pain and panic, he unites a group of broken and desperate teens and showers them with the love and affection they’re so desperate for. But Simon has a much darker plan for his followers. “Belongingness” can be a terrifying subject. When a young woman embeds herself in the cult looking for answers to her sister’s disappearance, she discovers their secret and an even darker secret within herself. 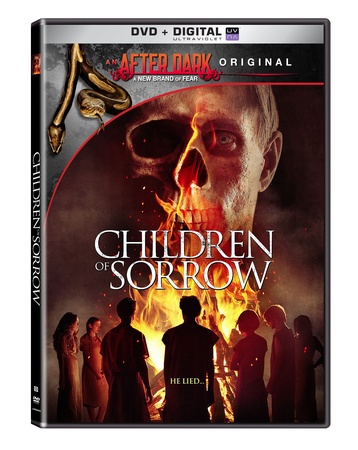