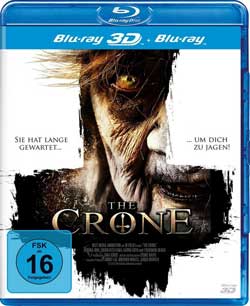 The Crone is part of a Japanese horror project which also includes Norio Tsuruta’s Talk to the Dead and Koji Shiraishi’s Cult. Ayane, Nanami, and Mayuko are members of a new 3-member idol group called “Jersey Girl”. One day they’re invited to appear on a television show about the paranormal where they’ll visit an abandoned nursing home in the mountains to see which one of them is the bravest and document their experiences. However, as soon as the girls arrive, they begin to to have strange paranormal experiences. Before long, they begin to turn on each other as the stress of the situation overtakes them.

The most admirable film makers throughout history have been those possessing the willingness (i.e. balls) to take risks with their craft.  This statement applies to a huge ratio of Japanese horror mavens whose work I’ve experienced.  I’d pull out an aging chestnut to further describe, but these wonky artists don’t even seem to acknowledge the existence of any “box” to “think outside of.”  This is especially true of their celluloid ghost stories, which have innovated and progressed the sub-genre in ways their American counterparts have only been able to borrow from, plagiarize and directly remake. 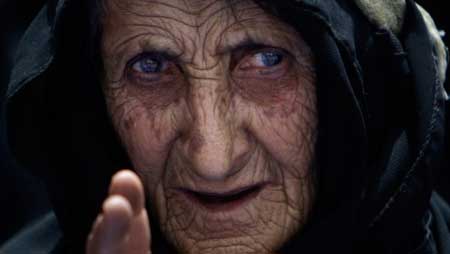 That isn’t to say that a haunting flick from across the globe is incapable of being derivative.  Perhaps not quite “found footage” derivative, but at the very least uninspired.  At times as well, the obsessive need to display creative and original moments of terror can be taken too far, resulting in eye-rolling and unintended fits of giggles.  The latest from writer/director Eisuke Naito commits both of these sins as haphazardly as it creates great moments, throwing everything from the standard dwarfish specter to some truly revolting body horror at its audience, hoping some of it sticks.  “The Crone” is a mess, but never less than engrossing in its micro-budget excesses.

As a publicity stunt, teen pop group Jersey Girl decides to visit an abandoned and supposedly haunted hospital outside of Hong Kong and film the experience for their fans.  (Keep reading, it isn’t what you think.)    The girls consist of Ayane, Nanami and Mayuko, and are portrayed by Honoka Miki, Shiori Kitayama and Kaoru Goto.  I honestly don’t know which actress played who, because the film’s credits and official website are in Japanese.  It matters naught in the end, as these three are the standard jail bait cuties, cast for looks over talent and living up to the non-challenge.  After suffering a small cut on her face due to a jealous prank instigated by her band mates, Ayane volunteers to enter the building first.  Once inside, she and we are immediately introduced to the title antagonist, and whoah nelly, friends . . . 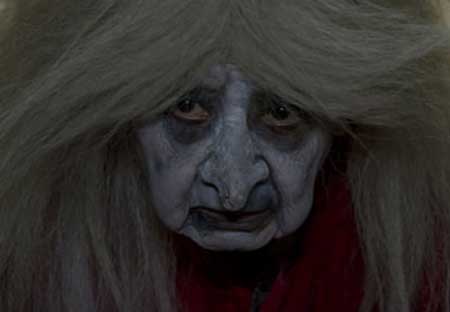 The crone of “The Crone.”  Where to begin.  Seen initially in quick peripheral flashes that build a terrific intensity level, once our wily, wee witch makes her full appearance as she pursues Ayane throughout the halls, all bets are off.  Standing at no more than four feet tall and wearing I-swear-to-Christ the exact same makeup as Billy Barty donned to play Gwildor in the wretched “Masters of the Universe” (there’s a memory that could have stayed repressed), it’s the gait that truly elevates this spirit to near “Troll 2” levels of cult hilarity.  A sort of speed-shuffle that would play as cartoonish in itself is enhanced by footfall sound effects taken straight from a Looney Tunes short.  Given Ayane’s reaction, I’m pretty certain I was supposed to be terrified of this being, but I was laughing too hard to gauge actual intent.

There is still so much to be expounded upon concerning the crone’s character design, but more on that later.  Ayane escapes the evil midget via an awkward jump cut, as she is suddenly back amongst her cohorts and preparing to give a concert in the park for approximately seven leering perverts.  The scratch on her face quickly spreads into a rash-like infection, and she is rushed to the emergency room.  Once released, her mother won’t allow the others access to see her, resulting in Jersey Girl’s manager Ms. Mochizuki (Aimi Nakamura) bruising her arm trying to push her way inside the house.  This wound, like Ayane’s abrasion, quickly escalates, resulting in a few cringe-inducing scenes that would make Cronenberg thankful he hadn’t eaten lunch yet.  Let’s just say that you may never feel the urge to itch or pick at a scab again after watching “The Crone.” 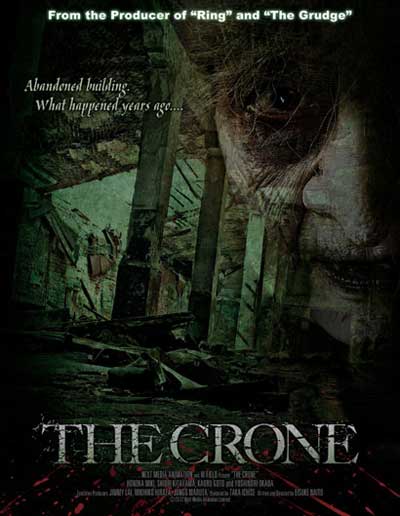 Mayuko and Nanami finally gain access into Ayane’s home, and discover their friend has transformed into a wheezing, elderly old woman.  Not-so-cute Ayane explains that they must free the crone’s spirit from the back room of the hospital to lift the curse.  The two return to find a doll version of the crone (life-size) bound to a cot with barbed wire.  Upon its release, the Cabbage Patch Crone shares visions of the hospital’s dark past with them.  These flashbacks are incredibly effective as they depict the atrocities inflicted upon the elderly residents when the building served as a nursing home, but completely contradict several previous plot points (including even the existence of the doll itself) during their unveiling.

Once crone plush toy turns into real crone to initiate False Ending #1, the sheer goofiness of the venture gets bumped up another notch.  One shot in particular must be seen to be believed.  It is taken from outside one of the institution’s corridors, and only the top of our little witchy-poo’s head can be seen through the windows as she gives dogged chase, shrieking like an inexhaustible tropical bird the entire length.  It’s these times when I wondered if I was culturally missing something, or if my beer-spitting guffaws were precisely what Naito was aiming for.   Of course, there is the third possibility:  Clumsy ineptitude in any industry is not relegated to region. 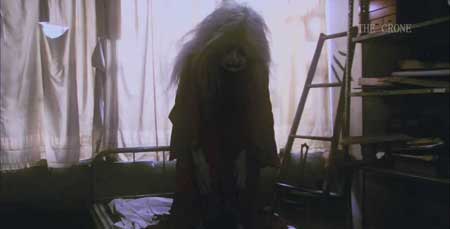 “The Crone” does a couple of things well, and when if fails it does so in spectacular fashion.  Really, really spectacular fashion.  Naito and company have earned themselves gold stars for exuberance, but they pull this ghostly tale in so many random directions it’s often as incoherent as it is delightfully wrongheaded.  You won’t be bored for 71 minutes, but you probably won’t be happy after with how you’d spent that time.