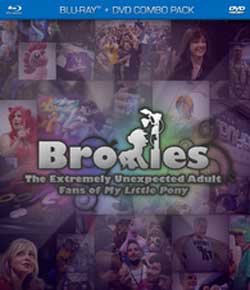 A film profiling the unusual cross-demographic fandom of the ostensibly girl oriented television series, My Little Pony: Friendship Is Magic (2010).

So the question here is what are “Bronies” and why are we reviewing a film about them? After receiving this documentary-style film with a peculiar title attached to it, I thought it might be “just off beat enough” to have some cult associative qualities to it. Knowing that its subject matter was way off-base for a horror site, it still seemed intriguing enough to perhaps include it in our cult films section. My guess was not incorrect.

For those who haven’t heard the term or those who have and don’t understand the fan boy base around, I suppose this review is good enough to fill in the gaps. Created by Laurent Malaquais and written by Nat Segaloff, “Bronies” is about the “primarily” male fan base who are obsessed with the cartoon “My Little Pony”. While the name “Bronies” does suggest a male rooted group of fans it has also been applied collectively to the “fewer” female appreciators of the cartoon series.

“Bronies: The Extremely Unexpected Adult Fans of My Little Pony” (I’ll now call it “Bronies” for short) is a documentary created to showcase this particularly unique segment of our culture. The film interviews many of those who consider themselves “Bronies” including some of the family perspectives of their children who have taken to this cultish phenomena (It should be added that much of the core fan base are much older males who you would think would have “outgrown” this meant-for-small-children TV cartoon series)

The fans of the show range from collectors, to music composers, to editors of the cartoon series (usually homemade Youtube concoctions) to simple appreciators of its psychology. “Bronies” are not unlike the fan culture of Star Wars fanatics who have long been well known as obsessed over the films details and characters. The term itself arrives from the combination of the words “bro” and “pony” ……better described as men who enjoy a show meant for young girls.

In the case of this film, we have the “Bronies”…lovers of the cartoon series which features talking ponies in various neon colors. As explained, the series provides a positive intellect around the episodes that seems to inspire various admirers of the show. This inspiration which is expressed as a “positive approach to life” is supported by typical fan boy practices such as collecting the figurines and attending various conventions that cater specifically to “My Little Pony”. The association here is also not unlike that which reminded me of some religious followings who see beyond the surface value that is presented. 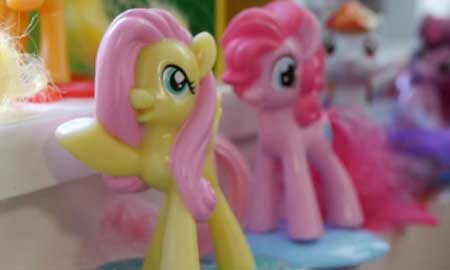 As I watched the film, several thoughts came to mind that most viewers would probably relate to….which is: “I just don’t get it”, to “Ya, I hear ya, but I still don’t get it!”. The culture of “Bronies” is not specific to gays and flamboyance (as one might assume), but as its attraction is presented it would appear that it does attract a partial crowd of that nature. On other notes, those who have a fascination for this TV show are often ridiculed for their support of the series. This struggle is explained from various interviewees who reveal some of the personal hardships they have encountered in their communities from being a Bronie.

In all though, it really is a film that tries to explain its attraction narrated by various supporters of the culture. There is plenty of Cosplay and dress up that seems inspired by favorite Ponies from the show. This Hasbro-originated series has elevated itself from something simple and typical into a base for admiration and deeper expression. Whether viewers of this film tend to agree is a matter of choice, I for one found it “still” an odd cartoon meant for young girls and nothing more.

Though the fun here is the invitation into leaning about new things and how some of these things tend to expand into a life of there own. Viewers can certainly learn more on their own with the number of Youtube videos and mixes created by this fan base. The documentary is well done and does a great job of exposing us to something different.

I found the rhythm of this documentary to follow in the footsteps of similar George Lucas documentaries I have seen in the past. I suppose Wookies and Storm troopers is a bit more of an attraction than talking cartoon ponies, but hey…… it is what it is….which in this case is “Bronies” 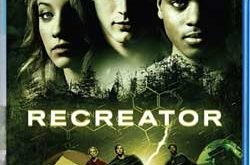