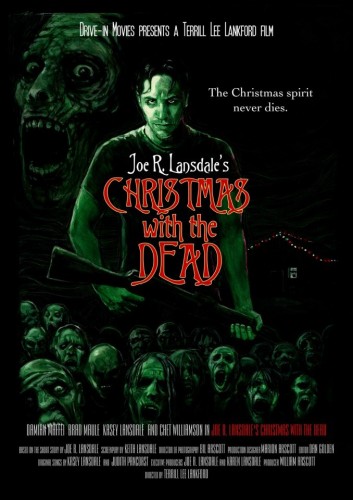 After a freak space storm turns the population of Mud Creek, Texas, into raving “snappers,” Calvin, a lone survivor, will never be able to give his now undead wife the perfect Christmas. He unfettered determination leads him to cross paths with G.M., zombie hunter, and a group of insane asylum inmates looking to feed Calvin and G.M. to the hungry monsters.

Now that Thanksgiving is over, it is time for Christmas with the Dead. The film from director T.L. Lankford is a bit of a family affair as Keith Lansdale writes the script based on his father’s (acclaimed horror writer Joe R. Lansdale) short story. The author’s daughter, Kasey Lansdale, stars as Calvin’s wife Ella and provides much of the holiday music featured on the film’s soundtrack while Joe and his wife Karen are the executive producers. The film plays the material for laughs making for an entertaining but somewhat lacking zombie apocalypse entry into the over-saturated sub genre. The direction is fairly straightforward feeling more like a television production than a theatrical film with the cinematography and the effects playing up the comedy far more successfully than the horror.

The film sets up Calvin’s (Damian Maffei) inner turmoil as he struggles to share his wife’s passion for the festive holiday season. When he wanders off to take a frustrated nap, a freak celestial storm turns his family, and most everyone else, into hungry living dead monsters, called “snappers.” Calvin survives with his undead wife, Ella (Kase Lansdale), contained within his home. Months pass before he meets another living soul. On a routine salvage run, he nearly gets his head shot off by G.M. (Brad Maule) a one-time garbage man turned expert zombie hunter. Once Calvin convinces G.M. he is still alive, the two pair up. Things take a turn for the worse when inmates from the mental hospital discover their location, kidnap the two men and return them to their cult leader, Reverend Mac (Chet Williamson). The madman has evil plans for Calvin and G.M. but the pair have a plan to escape… 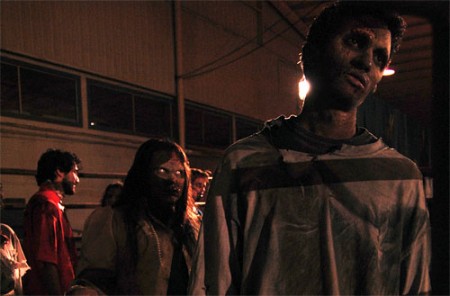 Christmas with the Dead is a light-hearted take on the undying zombie craze mixing holiday horror with gut munching undead monsters. The film never takes itself seriously. Thankfully the sense of humor is far from overbearing and the mix of holiday music accents the comedy nicely. The film even has a hilarious and successful dance number that serves the story without feeling forced or derivative. It manages to avoid unfavorable comparison with Thriller but that zombie beat is such a cultural phenomenon, it is difficult for it to leave its influences behind. Christmas with the Dead gives it an honest shot with its outlandish and goofy explanation providing a humorous reasoning for the zombie dance number to be in the story. It ends up being a highlight of the film. Unfortunately with out any weight to the consequences the film plays like a morbid sitcom as Calvin moves from set piece to set piece, joke to joke. The inmates are far too stereotypical and comical to be threatening with Reverend Mac giving the film a bit of a Jim Jones, cult menace, undercurrent toward the conclusion, but never enough to make any difference. 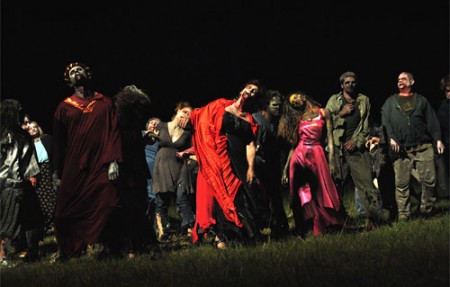 Zombies, and zombie films, are infecting cinema and home video as aggressively as the monsters corrupt the societies they invade in the movies. It is difficult to make a mark anymore – to be original. Christmas with the Dead never fully succeeds in making their zombies unique, aside form the dance number gag. These are not memorable creatures or make-up. With The Walking Dead at the top of the TV charts and Brad Pitt battling raging zombies in the theaters with World War Z, it may be too much for a low budget film to strike a cord with its audience. Warm Bodes did so early in 2013 by turning the story on its ear. Another issue is the reluctance to call them zombies anymore. Since Shaun of the Dead, many film makers avoid calling their undead the “zed” word. Christmas of the Dead calls them “snappers.” This device is quickly becoming trite and Christmas of the Dead just adds to the pain.

T.L. Lankford’s direction is better suited for the comedy than the horror as is the acting of the film’s lead, Damian Maffei. Every frame seems to set up a pun or a gag. Some of it works, such as how Calvin deals with keeping his undead wife from snacking on his innards and the aforementioned zombie ball. Other bits fall short, most of the featured inmates are more annoying than amusing. Brad Maule as G.M. is inconsistent, sometimes near brilliant funny and other times awkwardly dull. When he works he manages to be the best thing in the film. 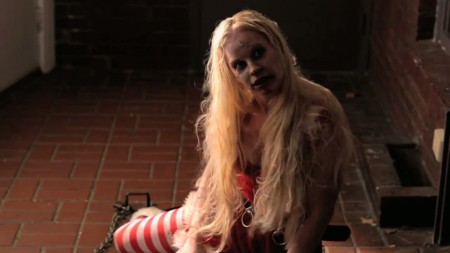 Christmas of the Dead has its heart in the right place and carries the correct tone for its intended horror-comedy approach. Never funny enough or frightening enough or gory enough to become a memorably entry in the zombie film genre or the horror-comedy genre, but the film is successful enough for light entertainment during the holiday season the provide some zombie laughs and smiles. The film also benefits from a bouncy holiday soundtrack that tones the expectation and execution. Christmas of the Dead will not likely put Joe R. Lansdale on the map as a horror producer, but the effort is full of passion for the material which can take a project like this a long way. Christmas of the Dead is a perfect film for horror fans looking for some Christmas cheer in their holiday horror home viewing.