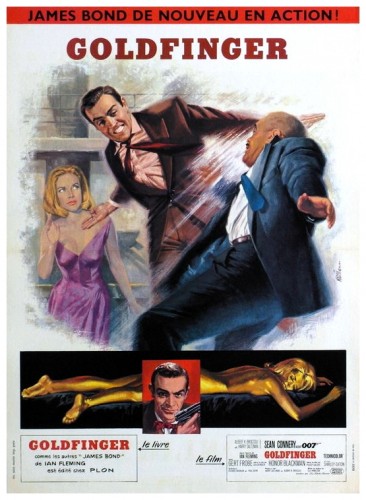 “The powerful tycoon Auric Goldfinger has initiated Operation Grand Slam, a cataclysmic scheme to raid Fort Knox and obliterate the world economy. James Bond, armed with his specially equipped Aston Martin (its accessory package includes built-in machine guns, a smoke screen and an ejector seat), must stop the plan by overcoming several outrageous adversaries. First there’s Oddjob, the mute servant who kills at the toss of a lethal hat; next, the beautiful Jill Masterson, who gives new meaning to the phrase ‘golden girl’; and finally, sexy pilot Pussy Galore, whose romantic feelings for Bond complicate her involvement in Goldfinger’s high-flying scheme.” (courtesy IMDB)

Spy movies really began back in the thirties, most notably in the Alfred Hitchcock films The Thirty-Nine Steps (1935) and The Secret Agent (1936), and the Michael Powell effort The Spy In Black (1939). These all looked back to fiendish German plots during World War One, but during a time when Hitler’s Germany was posing a new threat. Hitchcock updated the spy scenario to the Second World War in Foreign Correspondent (1940) and Saboteur (1942). Authors like Eric Ambler, Graham Greene and Ian Fleming added a modern chic to spying in the fifties as the Cold War kicked in. During the sixties ex-MI6 employee John Le Carre brought an authoritative realism in The Spy Who Came In From The Cold (1965) while the novels of Len Deighton focused on a gritty no-nonsense but funky approach in The Ipcress File (1965) and others. By the mid-sixties spying had become ‘hip and groovy’, with the Derek Flint (James Coburn) and Matt Helm (Dean Martin) films poking much affectionate fun. 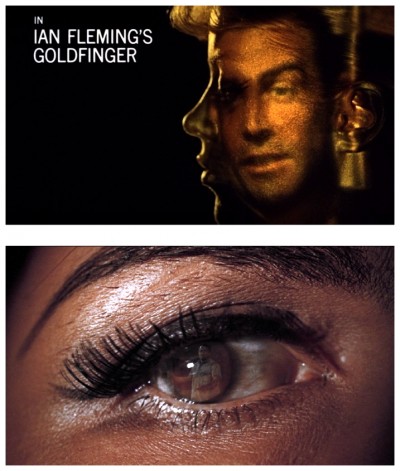 Producer Albert ‘Cubby’ Broccoli revolutionised genre cinema by showing the major studios that it could actually be profitable. He thus opened the door to the multi-million-dollar financing of fantastic films, without which the genre could not have reached the dizzying heights (and abysmal depths) of today. Broccoli did this by producing a series of super-spy adventure movies featuring James Bond, a modern-day swashbuckling killer and lover, originally the creation of bestselling author Ian Fleming. From the beginning, the Bond movies have never been hardcore fantasy, but they are the kind of fringe fantasy that was first popularised by the Doctor Mabuse films of the twenties and the Fu Manchu films of the thirties, adventures featuring super-villains and mad scientists out to control the world and an assortment of implausible scientific gadgetry. While purporting to take place in the real world, most of the Bond films are, to varying degrees, science fiction. 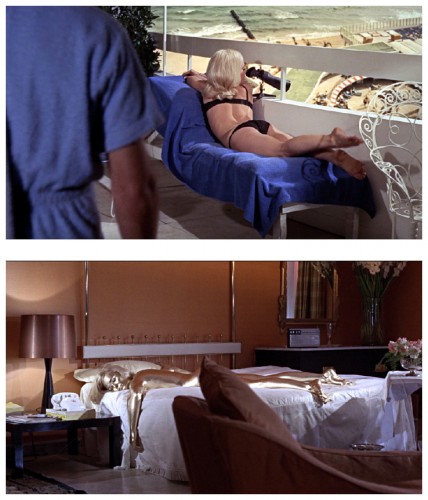 They are also fantastic in the psychological sense – by which I mean they create fantasies of potency, urbanity and guilt-free mayhem – impossible in the real lives of ordinary people. Little-known actor Sean Connery became a superstar overnight as the dashingly debonair British agent 007, a new type of hero: He had a license to kill; practiced judo; was a well-educated gentleman; dressed well; had great taste in food, met only beautiful women, could take on villains, traveled to exotic locations; refused to panic when the fate of the world rested on his shoulders; had charm and a subtle sense of humour; and had his own theme music that would play just by saying his name. If the first two films set up the character of James Bond, the third film – Goldfinger (1964) – established the ingredients for Bond films to come. It has two diabolical villains: gold-mad Auric Goldfinger (Gert Frobe) and his seemingly invincible henchman Oddjob (Harold Sakata) with a blade-rimmed bowler hat. It also has two sexy women for Bond to seduce: blonde Jill Masterson (Shirley Eaton) who dies covered in gold paint and brunette ‘Pussy’ Galore (Honor Blackman), a pilot with bisexual tendencies who falls for Bond’s charms. 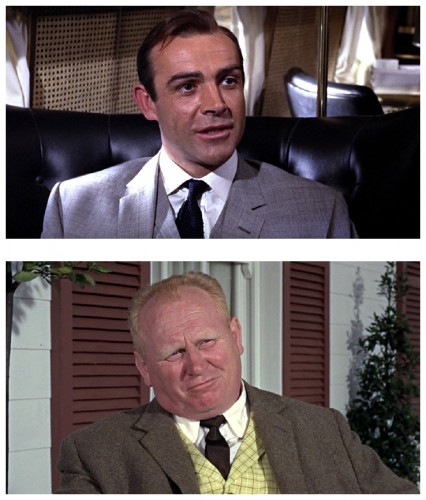 There’s lots of humour, action, gimmicks (introducing the famous Aston Martin with its passenger ejection seat), an amusing yet tense golf game between Bond and Goldfinger, thrilling fights to the death, and a fascinating central crime. Fairly faithful to Fleming’s novel, Goldfinger also captures the author’s interest in Germanic villains, the machinations of the Cold War and the slick appeal of the United States. Bond is introduced to Goldfinger in Miami, where he is cheating at cards with the aid of Jill Masterson. Bond’s interference with the game by seducing Jill results in her being killed and painted gold. Bond next meets Goldfinger over a game of golf where the wily German uses his mute-but-deadly Korean bodyguard Oddjob to cheat once again. Bond, in his gadget-filled Astin Martin DB5, tracks Goldfinger to the Alps, revealing a gold-smuggling operation. Bond is captured and Goldfinger threatens to slice him in half with an industrial laser: “You expect me to talk?” – “No, Mister Bond, I expect you to die.” 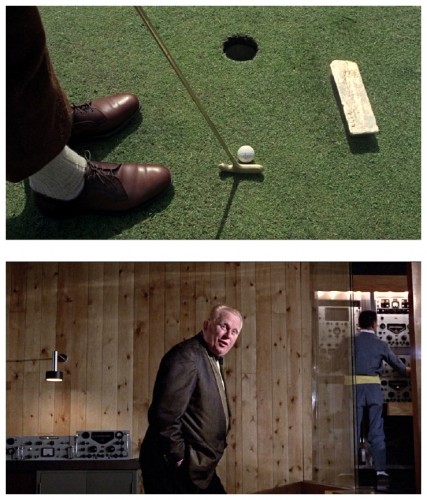 Bond awakes to find Goldfinger has marked him for an audacious heist in the United States. Using Pussy Galore and her flying troupe to gas the population, a bunch of mobsters will help him rob the US Treasury gold reserves at Fort Knox. Bond learns of the plot, seduces Pussy and gets a warning out to the CIA. However, it transpires that Goldfinger, far from stealing the gold, intends to irradiate it to vastly boost the value of his own holdings. The plot is foiled but, in a thrilling climax with Bond handcuffed to a nuclear bomb in the vault, he manages to kill Oddjob and tries to defuse the bomb. He is saved by a CIA agent exactly 0.07 seconds before detonation. Goldfinger has fled, but Bond encounters him when flying back to England, a struggle ensues, a shot is fired and, as the plane decompresses, Goldfinger is sucked out of the window. 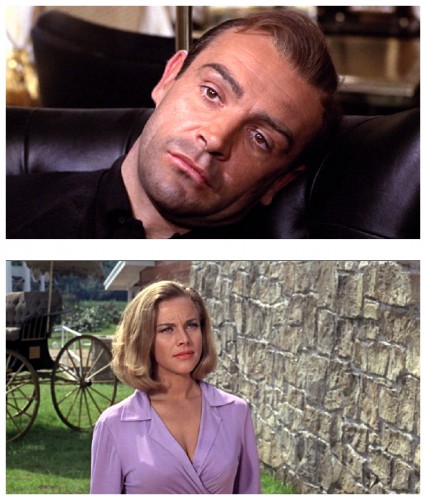 Goldfinger set the standard for the later Bond movies: gigantic Ken Adam sets, great cars and a brilliant villain. It was also the first Bond film for which a pop star was commissioned to sing the theme song, in this case Shirley Bassey. For many, Connery remains the definitive Bond. Connery’s portrayal of Bond, the agent with a license to kill, captured Fleming’s original characterisation of 007 more closely than his many successors. A portrait of unflinching dedication to his task, a taste for both sophistication and women, his cruelty and, occasionally, remorse for those that got in his way. His expression when finding Jill asphyxiated as a result of his seduction of her, says it all. It’s with this melancholy thought in mind I’ll politely ask you to join me again next week as we step up to Hollywood’s all-you-can-eat buffet and fill your plate with public domain potato salad next week for…Horror News! Toodles! 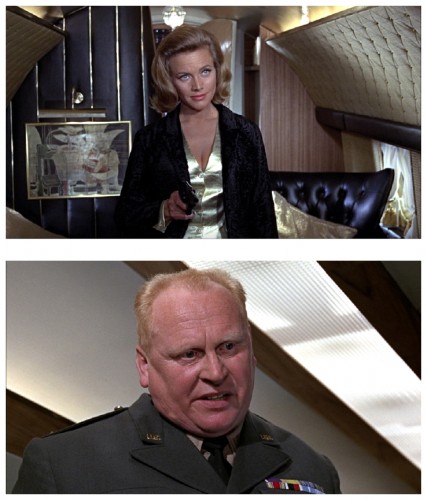