White House Down is out! The kind folks at Sony sent us 1 bluray to giveaway. No contest, just a random drawing from emails received. The winner will be selected from using a random number counter that will choose between the number of entrees we receive. Only 1 email per person is needed. This will be limited to within US only (sorry)

If you are interested in this free giveaway, send an email with the tile “White House Down” to “contests@horrornews.net”

o   The Beast – A look at the film’s presidential limo, better known as The Beast.

o   VFX Boundaries Down – From massive blue screens to virtual sets, audiences will discover technologies that were literally invented by filmmakers.

o   The Inside Story – Uncover this concept’s fast-moving rise to the big screen.

o   Presidential Treatment – A look at the size and scope of this massive production.

o   Lights, Camera, Heart-Pumping Action – Uncover how filmmakers utilized a unique and stylistic approach to lighting, as well as various filming techniques to capture the true scope of the film’s immense action.

o   Crashing The Oval Office – See how filmmakers constructed a stunt set then drove an SUV at full speed into the Oval Office.

o   Recreating The White House – Hear from the filmmakers about the meticulous detail that went into replicating the White House. 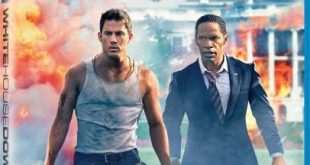