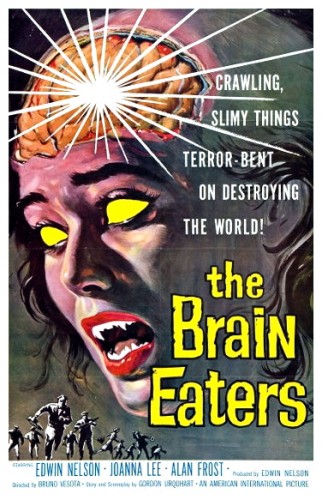 “Strange things are happening in Riverdale, Illinois. A huge, seemingly alien structure has been found jutting out of the earth. Sent to investigate the origin of the mysterious object, Senator Walter Powers discovers that parasites from the center of the earth have infiltrated the town, taking control of the authorities and workers, making communication with the outside world impossible, and leaving the responsibility of stopping the invasion up to Powers and a small group of free individuals.”

If there’s one person for whom ‘Living Legend’ is applicable in the department of genre films, it must be my old friend Roger Corman. A one-man movie industry, Roger has, since the fifties, directed at least fifty feature films, produced more than two hundred and distributed many more. “It started in the late fifties. I was doing fairly well as a young producer-director and I knew people around town who moved in a certain milieu, and I’d made a little bit of money and was looking for some way to invest it. A friend of mine, I think it was Al Kallis, came to me and said he knew Irvin Kershner and Andy Fernady who wanted to make a very low-budget film. Al wanted to know if I’d back them. They were just out of school, doing TV documentaries for one of the local television stations. I put up the money and they made a little picture called Stakeout On Dope Street (1958) which we sold to Warner Brothers and did extremely well.” 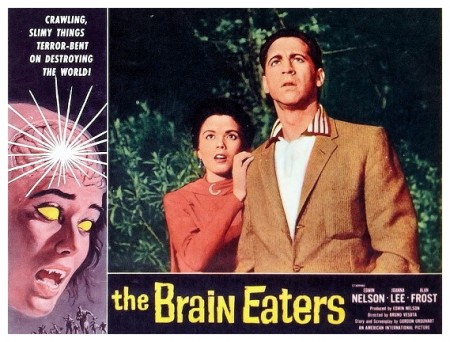 Since he had such good luck with Stakeout On Dope Street, Roger continued to act as executive producer on three more films, all science fiction: The Brain Eaters (1958), Night Of The Blood Beast (1958) and Attack Of The Giant Leeches (1959). The first of these, The Brain Eaters, was financed as a favour to Ed Nelson, an actor who had appeared in many of Roger’s movies. Nelson wanted to get into production, so Roger put up the US$26,000 required for a six-day shooting schedule which Nelson produced with Bruno Ve Sota directing Gordon Urquhart‘s script. The film starts with young Glenn Cameron (Alan Frost) driving his lucky fiancé Elaine (Jody Fair) to a small American town called Riverdale in Illinois to break the good news when they see a sudden bright flash. They stop to investigate and discover a large metal cone measuring fifteen metres tall. 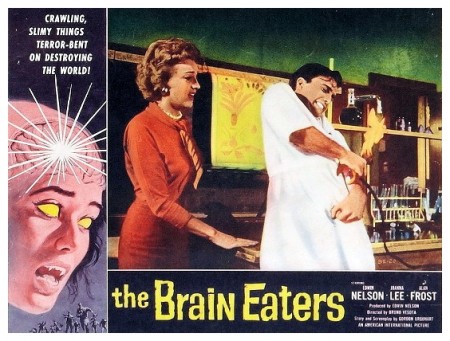 In Washington, Senator Walter K. Powers (Cornelius Keefe under the pseudonym Jack Hill) insists on taking full responsibility and flies out to Riverdale where he is met by Glenn who also happens to be the son of the Mayor (Orville Sherman). Glenn informs the Senator that his father has mysteriously disappeared and there’s been several unsolved murders in the area. Glenn takes the Senator to the cone where Doctor Kettering (Ed Nelson), Doctor Wyler (David Hughes) and their young assistant Alice Summers (Joanna Lee) are all busy running all sorts of tests on the unidentified object. Eventually everyone ends up back in the Mayor’s office, including the Mayor himself, who has just reappeared. After some conflict with the Senator about who is in charge, the Mayor pulls out a gun and makes a run for it, only to be shot down by one of his own policemen. 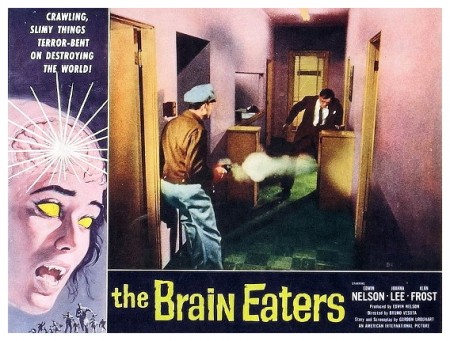 Upon examining the body they find two holes in the back of the neck, and Kettering performs an autopsy to discover that the Mayor was being controlled by an alien mind parasite. Kettering puts his thinking-cap on and comes up with the startling theory that these parasites must have come from the cone, but who else is being controlled? The mystery deepens even further when bio-chemist Professor Helsingman (Saul Bronson), who has been missing for the past five years, turns up out of the blue. It seems the cone is not from outer space but has actually burrowed up from beneath the surface of the Earth, letting loose vindictive slug-like creatures which attach themselves to people’s necks and take over their minds. Kettering and his team face a race against time to stop the parasites before they take over the entire human race! Keep an eye out (ow!) near the end for future Star Trek veteran Leonard Nimoy as the bearded god-like leader of the parasites. 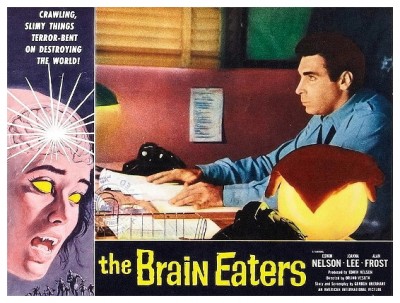 In the tradition of such films as It Came From Outer Space (1953), Invaders From Mars (1953), Invasion Of The Body Snatchers (1956) and I Married A Monster From Outer Space (1958), The Brain Eaters also has aliens attempting to take over the population of an isolated American town one citizen at a time, with lots of Communist paranoia and undertones of infiltration as expected. This fantasy of brainwashing and transplantation – in which people just like you and me are taken over by aliens – suited an American audience terrified of subtle indoctrination by Communism or fluoride or conspiracy of some kind. Intellectual Catholics might be amused to observe that many of these sorts of films are ideal examples of an ancient heresy known as the Manichean, which implies that the struggle between Good and Evil is a battle between equals, and sees the human body as the potential temple of Evil. This is always a dangerous view, as it lessens any need we may feel to accept responsibility for our actions and hide behind phrases like “I was only following orders,” or “The devil made me do it.” 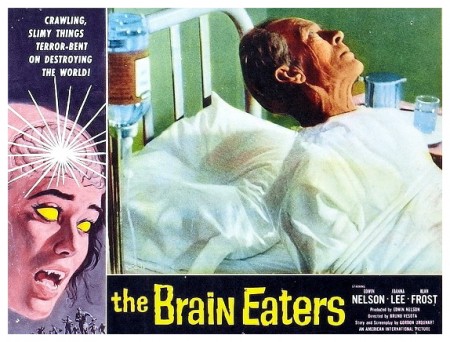 With so little money available, producer and star Ed Nelson took it upon himself to supply the parasites. According to director Bruno Ve Sota: “I got a call from Ed. He wanted me to come out to his place in Pomona, he said he had something he wanted to show me. I said okay and he met me outside of his house. It was night and he had a flashlight in his hand. ‘Bru,’ he said, ‘I want you to look at this, see what you think.’ I had no idea what he was up to. We went to his garage, the place was pitch black. He left my side for a couple of seconds and, when he came back, I heard this buzzing noise. Then he flicked on the light and pointed the beam at something on the floor. I looked down and saw this funny little thing coming toward me across the cement. It looked like it was breathing, it had little antennae moving back and forth. I tell you, it looked terrific! ‘What do you think?’ he asked and I told him it was great.” 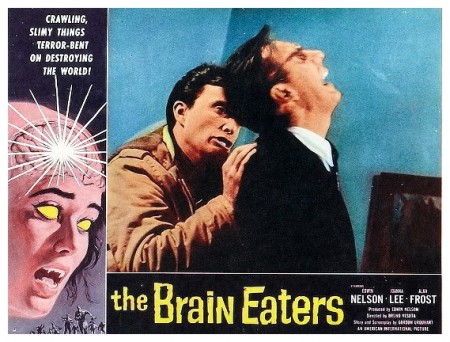 “What he’d done was buy this orange toy ladybug that you could buy in stores at the time, a wind-up thing, and he’d covered it with fur from an old coat he’d bought at a thrift shop or something. The antennae were nothing but pipe-cleaners. As I said, it looked terrific that night in his garage but, when we put them on the grass outside in the daylight, they looked terrible.” They may have looked like motorised bunny slippers but they were good enough for a US$26,000 production, and Nelson’s fuzzy little parasites made it into the movie. The Brain Eaters did little to advance Nelson’s career as a producer or as an actor because, soon after the film’s release, famous science fiction author Robert Heinlein filed a US$150,000 lawsuit against the movie, charging screenwriter Gordon Urquhart and its producers with copying, imitating and appropriating his serialised story The Puppet Masters which had appeared some years earlier in Galaxy Magazine. 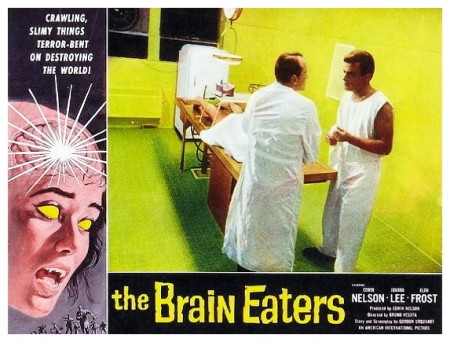 Roger Corman: “They stole it all right, no question whatsoever. Bruno brought that script to me and I said I’d back it. It was a pretty nice little script. Then I got this letter from Heinlein’s lawyer. I called Bruno and asked what it was all about. He said it was absolute nonsense, so I told my secretary to get me a copy of The Puppet Masters. I read it. Now, Heinlein was one of the most respected science fiction writers in the world, and they were denying they stole his story. They changed a few things so it wasn’t exactly the same but it was really obvious that they took it. So I had a meeting with Heinlein and his lawyer, and I explained what had happened. I told them I could probably go to court and fight them, claiming enough had been changed to make it a murky issue, but I knew it was stolen because there were too many points of similarity. We settled for a five thousand dollar amount because it was such a low-budget picture.” 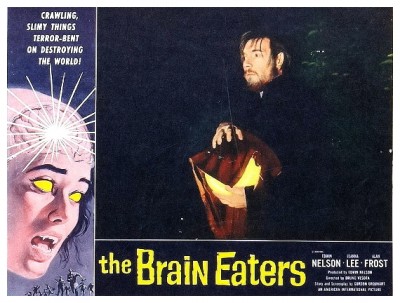 “Heinlein was a good man, as a matter of fact we even talked about doing a film together. He had a novel I was interested in but it was ultimately too expensive for me.” One can only imagine which of Heinlein’s novels Roger was contemplating on purchasing – Starship Troopers perhaps? It couldn’t have been any less faithful than the 1997 film version, which wasn’t even based on the novel but was actually an original screenplay entitled Outpost Seven, but that’s another story for another time. Right now I’d like to wrap-up this article by offering my profuse thanks to Faster And Furiouser: The Revised And Fattened Fable Of American International Pictures (1996) by Mark Thomas McGee for assisting my research for this article, and politely ask you to please join me next week when I have another opportunity to burst your blood vessels with more terror-filled excursions to the dark side of Hollywoodland for…Horror News! Toodles! 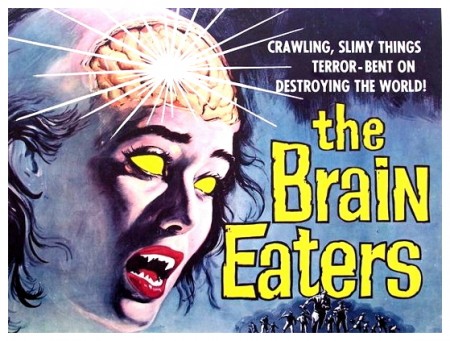