An anthology film featuring three back stories of patients who have ended up in a sanitarium run by Dr. Stenson. The first film tells the story of an eccentric artist and his descent into madness. The second film tells the story about an eight year old boy and his struggles growing up being raised by his abusive father and the coping mechanisms that he employs. Finally, we are treated to a story about a college professor who allows his obsession with the Mayan apocalypse and other end-time prophecies to rule his life.

I had never heard of this film when I was assigned to watch and review it. However, when the film started and I heard a familiar voice begin to narrate, I became excited very quickly. The familiar voice was that of Malcolm McDowell. He played Dr. Stenson, a Doctor working at a mental institution… and when I say mental institution, this facility seemed to be a full-on insane asylum. The opening moments of the film set the tone with a short tour of the dark hallways and bleak faces that reside in the hospital. 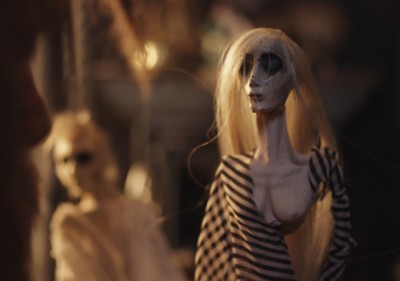 In the first story we are quickly introduced to Gustav, played by John Glover. John Glover is one of those faces that you have seen in seemingly hundreds of films and television programs, but you’re not quite sure where you recognize him from. Gustav is an eccentric, genius artist who is obviously suffering from some mental issues. He experiences hallucinations, paranoia, and other kinds of mental issues, but he obviously channels all his energy and psychosis into his works of art. I was very excited to see none other than Robert Englund playing Gustav’s caring agent and friend. This was a great way to kick off the anthology.

The second vignette didn’t quite have the star power that the first did, however there were a couple of faces that I did recognize. Lacey Chambert, the cute brunette known for her role in 2006’s Black Christmas and a slew of romantic comedies as well as squeaky clean television series played Ms. Lorne. Ms. Lorne is an elementary school teacher who is very concerned by one of her students named Steven (a nod to Alice Cooper’s Stephen? Probably not… but I thought it might have been cool given the premise of this movie). She suspects that not all is well with Steven’s home life and confronts his father played by Chris Mulkey (another one of those actors where you’ve seen him a hundred times, but can’t remember where you have seen him) when she suspects abuse. I realize that I keep using the word dark and/or depressing to describe this film… however, it is especially true in the case of Stephen’s story. David Mazouz, the actor who played Steven, did a great job portraying the depressed and abused child. He really put in a heartbreaking performance that I think is going to stick with me for a while.

Finally, obsession is the order of the day when James Silo, played by Lou Diamond Phillips, becomes obsessed with the end of the world and making preparations for life after a prophesied cataclysmic event happens. It’s no surprise that Mr. Phillips did a great job portraying the hurt, loss, and madness necessary to make this role work. Lou Diamond Phillips has been putting out great performances for as long as I can remember. Even when he starred in other B-Movies such as Bats and Red Water, he gave the movie a sense of credibility due to his performance.

Every one of these vignettes told a bleak and lonesome story. This movie is not a fun thrill ride because it dwells on topics such as paranoia, obsession, abuse, and deep, dark, depressing mental illness. Each story is bleak in its own way, and I could feel the sadness of the characters. The actors in this film all did a wonderful job portraying the hurt and sadness that their characters felt. I guess it’s no surprise given the cast list that this was going to be the case. However, even the folks without the name recognition of Malcolm McDowell, Lou Diamond Phillips and Robert Englund did a great job of making this film a very well rounded outing. In fact, it was even a treat to see Mayra Leal in this film. Mayra Leal is probably best known for her… ahem… revealing short part in Machete. You know the one…

Technically the film looked great. I hadn’t heard of any of the directors of this film Bryan Ortiz, Bryan Ramirez, or Kerry Valderrama, but they all seemed perfectly capable with the task that was set in front of them. Looking at their IMDB credits, I have to wonder how they pulled off getting such great actors to come and star in their movie. I’m not insinuating that they are not worthy by any means. Just that their credits list wasn’t long and didn’t have anything on them that I’d heard of.

All in all, this was a good movie. The stories were good, but very heartbreaking. This was a little difficult to watch because of the subject matter. This is not a film that I could watch over and over and enjoy on multiple viewings. Not because of anything the filmmakers or actors did wrong… in fact, it may be that way because of what the filmmakers and actors did right. They went out to tell stories of heartbreak and loss, and they succeeded with flying colors. I’d recommend this movie, with the caveat that if you watch it, you’re probably going to want to follow it up with something that will raise your spirits afterward.