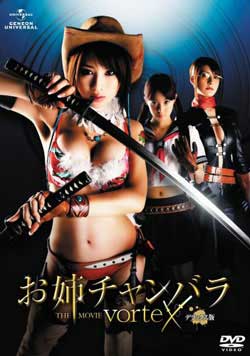 In 20XX the world is still overpopulated by Zombies and Aya and Saki stop fighting to join together against there new enemy, Himiko

On the heels of the moderate success of Oneechanbara comes right off the fryer ….a follow up sequel with the added subtitle of “Vortex”. The original film had its charm, sex appeal and almost innoccent like cuteness combined with hot martial arts zombie attacks, but somewhere the message got lost. Now the film does have it’s share of hot Asian ladies walking about and swinging samurai style but alot of the original zest is missing.

The blood shots have gotten boring resulting in mere trick camera editing screen splashes. Which after the first one you’ll be wishing they just went for it and spent the extra dough on real FX rather than blood clips. Another thing that’s odd is that when the zombies get hit, they usually explode upon impact. Yep, no cut and slice, but a quick cut to blood squibs…..also a bit annoying unless they were going to limit it to one or 2.

Alot of the original impact editing is missing, making alot of the shots just simple sword play. Like the original, the sets are….. well there are sets, just what they happen to find on the way thru the motions. A few warehouses that were probably bought cheap and abandoned were used to a cast of half done zombie makeup drones.

Now I checked the credits and it looks like most of the cast were cast as first time additions to the film. This means all the old players are now played by newcomers. Even Eri Otoguro who played the original role of Aya is no where to be found. The new Aya is still hot but due to lack of character role names on their  IMDB, I couldn’t tell ya who played who. Viewers will dig and laugh a bit at some of the erotic outfits worn, which by realistic standards wouldn’t be the attire zombie hunters would parade around in. However it still is pretty good eye candy for the male viewers.

From what I can tell,  the story begins 20 years later when chaos is multiplied by zombies  turning  everyone into more zombies. The core of it all has long passed bringing us into the current state of the world . Aya and Sako join up and kick ass along the way. Their latest enemy goes by the name Himiko. By mid film, I began to lose track of who was who and what the premise of the film was. You might find yourself in the same boat if you nod off, but at that point  I guess I didn’t care either. Now if you’ve made it to the 3rd act your probably sick to death of seeing blood graphic swatches hitting the screen…as really that’s all this has to offer graphically. Some fancy martial moves here and there but no real practical effects of any sort.

The battles seem to go on  forever and become almost redundantly lethargical. By that, I mean … it feels like they are using the same moves and same shots over and over again. The end is laced with bad CGI that doesn’t add anything to make it any better. Once in awhile you get a hot shot of Aya and then its back to bad zombie makeup and cheesy swordplay…..blah!

As a whole, these type of movies are usually alot more fun. In fact I highly anticipate them. In this case the fun had left the building into a production that seemed way too rushed to get another product out. Bad mistake, as all that will do is taint the “franchise”. Viewers might not be willing to sit thru a 2nd sequel based on this. I’m calling this mostly garbage, with some hot women that take the edge off the lameness of the production. Points for ladies, no points for story and end product. This one was a complete waste of time…. that had me wishing I had grabbed another film to watch before committing to reviewing it. 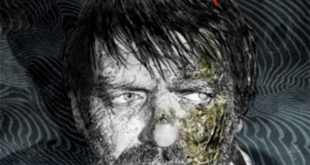 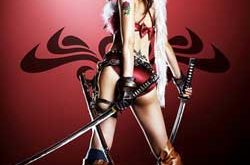