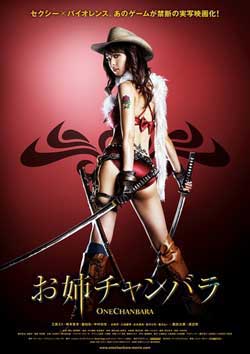 The movie adaptation of the hit Onechanbara video game series! In the year 20XX, scientifically created zombies roam the world in record numbers. Despite this, Aya is determined to track down her father’s killer, a person who was once close to her. With sword in hand and wearing nothing but her trademark bikini and cowboy hat, she sets off to settle the score. Aya is joined on her path to vengeance by the chubby Katsuji and the gun-toting Reika. Together, they hack, slash, and shoot their way through a sea of the undead to reach the final showdown with a mad scientist and the destined duel with Aya’s own sister. Extras: Based on the Onechanbara video game series. Onechanbara: Bikini Samurai Audio Commentary by Director Sakaguchi, Comes with special redemption code for Japan s #1 online card game.

So what’s a cowboy hat, a bikini and a hot young asian girl who can swing a sword like Jet Li have in common? Aya from the film Chanbara Beauty, that’s what! More from the world of zombies, sword wielding pyrokinetics and a few surprises in between comes the latest from Director Yôhei Fukuda. it’s original title of Oneechanbara: The Movie has been revised to something alittle more easier to grab hold of. The name itself comes from a video game by the same. This would allude to the fact of a few more Asian magic power balls than necessary.

If you haven’t noticed, we are in a time of hot school girl uniforms, young elites and now add to that …..cowboy swim wear. The outfit has nothing to do with the film except that its great eye candy with actor Eri Otoguro on board to provide.

As we enter this world in it’s own making, we are accosted by zombie hoards that don’t quite move like zombies. Ok, some lump around and wallow in there own lethargically moments but some don’t. High flying kicks and ninja twirls put these bad boys over the revised “Dawn of the Dead” zombies who were pretty quick in there own rights. The film as most of this nature doesn’t take itself too seriously with alot of martial arts and bloodshed. Though the difference here that you’ll notice right off the bat is alot of digital enhancements thrown in for good measure. As killing ensues, blood packs hit the camera lense, as swords chop thru limbs a lighting like digital overlay follows each swing in unison.

Ok, lets not forget the other hottie aboard Reiko played by Manami Hashimoto. Reiko is a gun toting expert marks women who can shoot the best of them down and not think twice. In introduction, a small battle of talents exchange as the 2 girls defend themselves against each other. Pretty cool stuff that is even cooler to see a sword deflect bullets and reflect them elsewhere for that matter.

Though it would be a shame if these 2 didn’t join up in strength and that they do. Accompanied by the somewhat whiney Katsugi they are on there way to Oz. Or in this case to defeat the evil master mind of zombie creations Dr. Sugaki. Sugaki is a brilliant scientist who suffers from a god complex. He bellieves it’s in his own right to revise the idea of raising humans from the dead until he gets the transformation correct. In the meantime…well the world is full of flesh eating zombies.

As they trod thru warehouse sets and kill off corpses, they also are intent on finding Katsugi’s sister Asami. Asami has been…well transformed a bit. A dose of the doctors injection and she’s now one with the undead. Though that doesn’t keep her from swinging a mean ball and mace contraption that proves to be a challenge even for the uberfast Aya. I love these kind of superhero battle scenes.

The 3 warriors actually set out to seek out aya’s sister by the name of Saki (Chise Nakamura)….note-insert 3rd hottie warrior. A past ordeal that separated the 2 produced a lifelong conflict that is coming to a head. Skill to skill, swords to sword….. a battle awaits for a final confrontation. In the meantime there’s this zombie problem that has to be dealt with. Sets are minimal based on a minimal budget, instead funds are dumped into computer tricks and makeup. This film is a blast of fast moves, ferocious undead and some supernatural metaphysics thrown in when needed. I had alot of fun watching it regardless of the Fx which sometimes were a bit to cheesy to digest. Plain and simple Eri Otoguro is just a beauty to behold.

Even if you don’t like zombie films the shots of her are still worth the price of admission. The action is done with plenty of wirework and some camera tricks to boost the speeds a bit. I’m sure you’ll be an instant fan of Aya’s jump and suspend-on-heads-with-her-boots move. A final showdown is a bit drawn out and might have you going c’mon already. At this point character association is thrown out the window in favor of a good ol ass whooping. 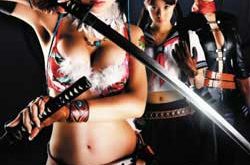