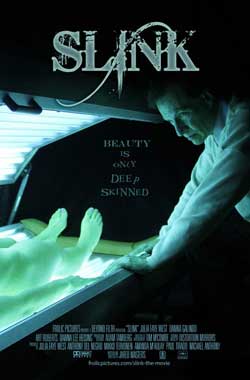 In the rural town of Wickenhaven, a psychotic tanning salon owner is responsible for the disappearances of many young, innocent girls, while his wife, an exotic purse designer, is willing to overlook his evil nature.

Slink, the word brings the imagination into full force.  What could it mean, a slasher film where they slink around, methodically stalking their pray? Could it be the name of an interstellar conquer coming to enslave humanity one person at a time?  Could it be a self-aware child’s toy with an unquenchable blood lust? (Why not they made a movie about a tire that did the same thing). Nope this movie goes with a literal meaning that most people probably don’t know, an unborn calf, or to give birth prematurely.  It takes a little bit of imagination to connect the dots of the title to the story plot, even though they do mention slink and it’s meaning in the movie, it doesn’t directly have anything to do with cows, calves, or them being born prematurely. 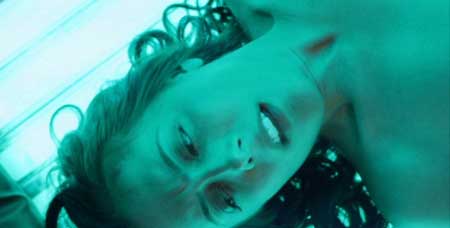 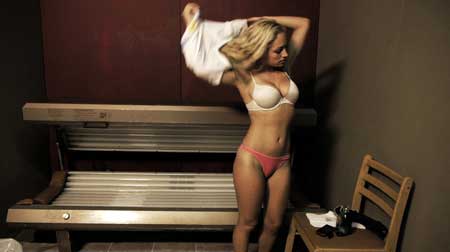 Let’s not get too hung up on the title, some titles have absolutely nothing to do with their movie and they still end up being good.  Let’s turn our attention to the plot; it’s not a puzzler by any stretch of the imagination.  From the opening scene the plot is pretty well mapped out in front of you, the “twist” at the end is very easily figured out much, much earlier in the film.  The plot revolves around a group of people in a small town killing off anyone they can.  They all work in a little strip mall at various boutiques, the strip mall is home to a purse store, that is all the rage.  A family comes to town to help clean out their uncle’s, who recently passed away, house.  They meet a suspicious lost aunt and find out the town isn’t what they think it is.  There are a few things that I thought I saw coming and then was thrown in a different direction to only find out I was right in the first place.  That’s how some of the writing goes in this movie, you know exactly what’s going on and then something that someone says or does throws you off course.  This should very much be credited to the writer, Marc Dishman, and writer director Jared Masters.  The two combined to take this movie a step above what it should have been. 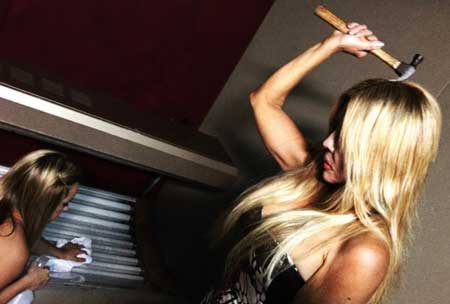 The acting is average, and no one really stands above anyone else.  The best, worst acting scene is a fight scene between Aunt May (Julia Faye West) and Xavier Nunez (David Saucedo), the kick that she throws looks like it’s off by five feet, it’s a scene that kind of makes you scratch your head and wonder why they didn’t do a re-shoot.  It does seem that Masters likes to reuse some of his actors from one movie to another like what Rob Zombie has done.  Three of the main characters in this movie are actors that have been in Master’s other works, 8 Reels of Sewage or Climb it, Tarzan!.  This is also seems to be a trend with Master’s production companies, Frolic Pictures and Beyond Filth Productions, have both been involved with 8 Reels of Sewage.  Frolic Productions along with Slinks other production company, Dismal Productions, are both involved with Master’s upcoming project Teacher’s Day, set for a December release date, and once again staring a cast of actors that have been in his other movies.

The one big peeve I have with this movie is the ending, or the lack of one.  I’m not saying that leaving someone in suspense is a bad way to end a movie, or even a good way to leave it open for a squeal, but one that feels more like they cut the last five minutes of the movie out and just roll the credits, that just isn’t a way to get a good following.  Even with all the bad, the good still comes out on top, this isn’t a movie that’s going to grow a cult following or even get a big release somewhere down the line, but Jared Master’s is a young director that could one day hit it big.  I would love to see what he could do with a bigger budget and some quality special effects.