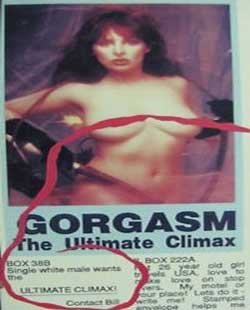 Tara, a psychotic call girl, has a strange obsession with giving men the ultimate climax. Chase is a detective out to stop her killing spree

If one was to list some of the reasons why they love America, somewhere near the top of that list, right around monster trucks and the World Wrestling Federation, would be the fact that there are not one, but TWO horror movies called Gorgasm. The Gorgasm we will be discussing today happens to be a movie shot on video in 1990 by Hugh Gallagher, not to be confused with Goregasm, the horror movie directed in 2007 by Jason Matherne and featuring the Cockface Killer. 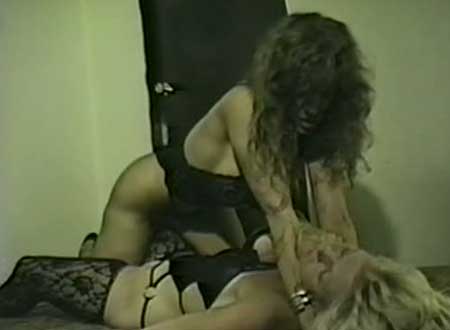 We open with a scene of a guy smoking and rambling about nothing, spouting random stoner-esque philosophy. But we can forget about that, just as the movie seemed to do. So skip to a man tied to a chair while a beautiful brunette named Tara (p*rn star Gabriela, better known for her role in Barefoot Confidential 8) dances in front of him. She begins to take off her clothes, using a knife to cut the straps of her dress. She cuts him with that knife across his chest, rubbing the blood on her body and making us wonder where this scene is going. Then she slits his throat. Since Detective Martinez is out on leave, the case falls into the lap of desk jockey Chase (Rik Billock, who went on to reprise his role as law enforcer as a cop in Stephen King’s The Dark Half). Tired of sitting around typing reports, he jumps at the opportunity. 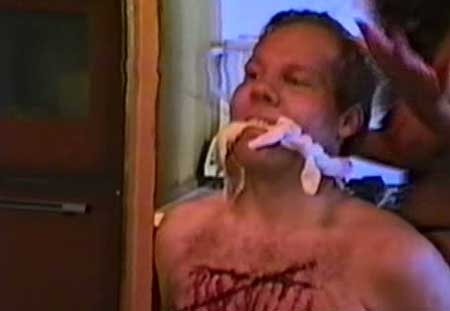 Chase goes to the victim’s home to investigate. Here he finds a bunch of S & M p*rn videos and magazines, including a photocopied zine called Xciting. Flipping through this collection of personal ads of people looking for sex, he finds a page with a half-naked woman that simply says “Gorgasm: The Ultimate Climax” and for some strange reason decide this is somehow related to the homicide case and so is a lead he must follow. We, the audience, are left believing he must have some kind of psychic powers.

Gorgasm pretty much sets a pattern early and sticks with it through the end. Our killer, Tara, appears at random guys’ houses and they are tied up. Then she takes her top off, often cutting it off with a blade of some kind, before killing them in a variety of ways (slit throat, decapitation, weed whacker, etc). In her role as Tara, Gabriela is topless in nearly all of her screen time (which is quite a bit, by the way). Apparently not enough skin for director Gallagher, he also includes a scene of Chase in a p*rn store and later in the publisher of Xciting’s office, where the camera zooms in on various p*rn posters and VHS tape cases. If only so much time was spent on the gore, or maybe the acting, or maybe even the story.

Gorgasm is the type of horror movie you watch with friends at a party. It’s the type of movie you make your own drinking game to (like maybe, drink a shot every time an actor looks at a cue card off-screen). It’s not the horror movie that people say is “awesome” without a hint of sarcasm in their voices. Don’t get me wrong, it’s fun and well worth the trouble if you can find it, it’s just not on par with the classics. It falls in better along the lines of movies like 555 and Blood and Sex Nightmare. 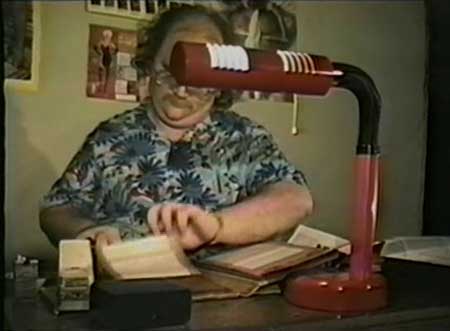 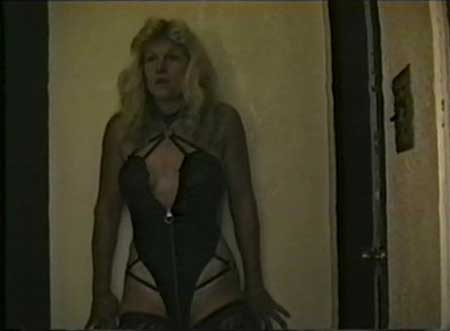 For those who watch Gorgasm and find themselves wanting more, director Hugh Gallagher did make two sequels to this movie, Gorotica and Gore Whore. Not surprisingly, a keen eye will notice he is also thanked in the credits of The Necro Files. Despite the schlock value of his work, he stayed fairly active in the mid- to late- nineties. Not so much can be said about most of the actors in this movie. Outside of Rik Billock, the only other actor to have any moderate success is Dave Johnson, who plays the garage door hanging victim. He had already become famous before Gorgasm, not for his acting but for his voice; he played an announcer in everything from Moving with Richard Pryor to Diff’rent Strokes and Tales From the Darkside.

It’s not that Gorgasm is horrible, it’s just that it isn’t very good. The acting is really bad, the plot is fairly unbelievable, and the gore could have definitely been stepped up a notch. We know right away who the killer is, so there isn’t even a level of suspense or mystery to the story. But it is fun, from the goofy attempts at humor to the ridiculous plot. I’d recommend it as a great pretense to have friends over and crack open a couple cold ones. 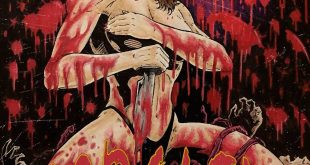 GORGASM and DEAD SILENCE Come at you with Two of the Hardest to Find SOV movies of all time! 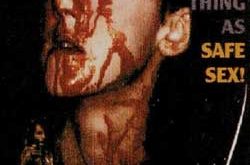