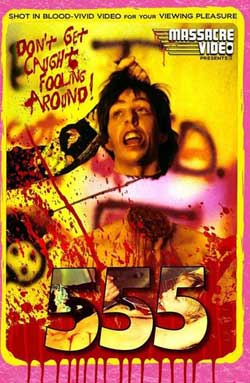 A spate of killings of teenagers by a maniac dressed like a hippie causes a detective to check the records for similar killings. He discovers that every five years, in the fifth month of the year, for five consecutive days, the same type of killings have occurred, and the few descriptions of the suspect always match: he’s dressed like a hippie. As the detective searches for the killer, he begins to have suspicions about his superior, an older man who is haunted by memories of his military service in Vietnam

In 1988, “director” Wally Koz and company decided to put together a little shot-on-video treat called 555. After seeing countless poorly done horror films, Koz decided he could do just as good as any of them. So he got together some family and friends and, with no previous experience, made a movie in his hometown Ukranian Village, Chicago. To watch 555 today, twenty-five years later, it makes sense that that is how the movie was put together. There’s always something a little extra special when you know and can tell that a movie is being made for the pure love of the genre. That being said, don’t go in expecting a masterpiece either. It is exactly what it is. 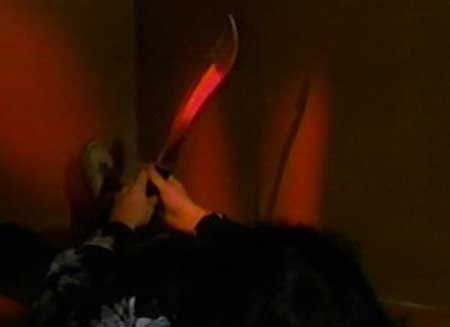 The story begins with a man walking along a beach. Cut quickly to a half-naked couple making out in a backyard. Suddenly, the man is murdered, his blood splashing unrealistically all over his topless girlfriend. The man on the beach turns at the sound of her screaming. Cue freeze frame, expected 1980’s music, and opening credits. In the next scene, we see the man who had been walking on the beach, Col. Wayne (played by Charles Fuller, who, just like the rest of the cast, had no previous or future acting roles), being questioned at the police station by three detectives. He says he saw a hippie at the scene of the crime, but they brush this off as crazy talk. The detectives, especially Sgt. Connor, are suspicious of him, but let him go. A reporter barges in and demands access to the story, but is denied. Sidenote to viewers: get used to the setting of the police station office, as more than half of the movie is spent here. 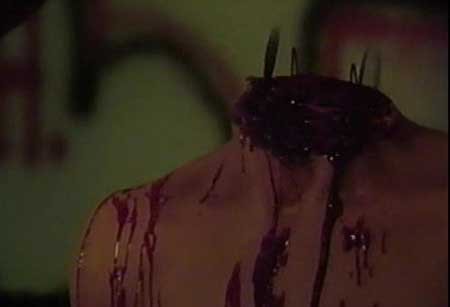 In the next scene, another couple is half naked and making out, then murdered. The guys head is cut off, his blood splatters on the girl, then she is tied up, cut up, and killed. Throughout the scene, an extra scream track is played over the normal dialogue track, making it more irritating than gruesome. When the detectives show up, so does the reporter, and we go through a lot of the same business as we did after the last murder. Red herrings are introduced, and we also learn that the killer has sex with the female victims after he kills them.

This sequence pretty much repeats itself until the end of the movie, where we find out who the killer is and then get a montage of the kill scenes that we have already seen. Half-naked couples are seen making out, then they are killed, then the detectives talk about the case, Sgt. Connors often getting angry and throwing his own stuff. There is also a scene of the reporter and the witness flirting and making out thrown into the middle of the action. 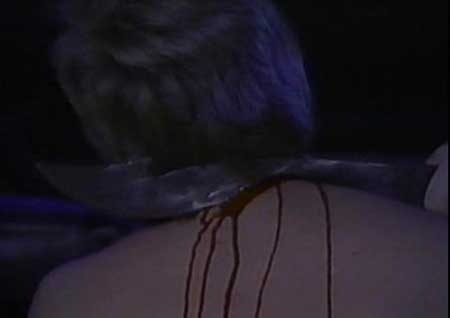 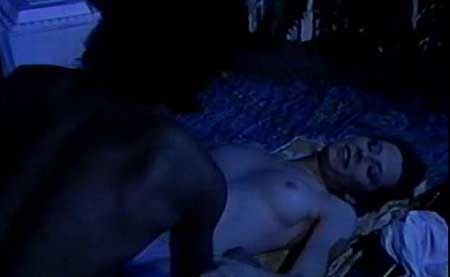 You may be asking, so what is the significance of the title, 555? Well, as the officers learn, there has been a pattern going back quite a while, every five years, for five nights in a row, the killer is murdering five couples (not to be confused with every twenty-third spring, for twenty-three days, when that monster thing kills people in Jeepers Creepers). It had happened in St. Louis previously, as well as Baltimore and other places.

Overall, 555 isn’t by any means a horrible movie. The acting isn’t fantastic, but it is surely better than many other low budget, shot on video flops. The gore and effects aren’t all that great, but there is certainly a lot of blood, mostly splattering on half-naked women (in case that is your thing). Many of the murders are very similar, all done with a knife, one involves a stabbed throat, another shows a decent (for the budget and inexperience of the crew) decapitation. The “suspense” of who the killer is isn’t very deep, as there aren’t many characters to choose from, but it is set up in a slightly different way than usual, so a little credit is deserved. 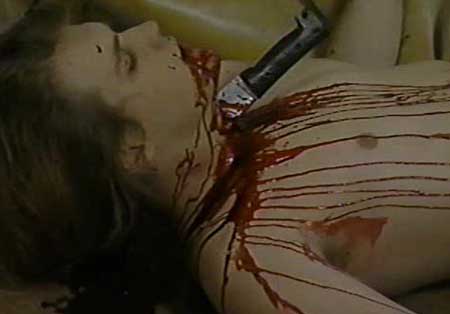 So why is 555 not a more popular 1980’s horror title? It isn’t the most exciting film ever, most of the eighty minute running time spent with the police arguing over who is the killer and talking about the killer and discussing how to find out who the killer is, with very little time spent on the murders themselves. The time we do spend with the killings becomes repetitive and the gore effects reflect the little money and level of experience. And parts that aren’t supposed to be funny end up bringing giggles; the irrational and almost constant anger of Sergeant Connors, the wardrobe choice of the killer, and the girl who hides under the covers in an attempt to hide when her boyfriend is stabbed in front of her. Is it worth paying a lot of money to own? No, not at all. But is it worth a view? Definitely, if for no other reason to appreciate the love of the genre that is evident throughout.