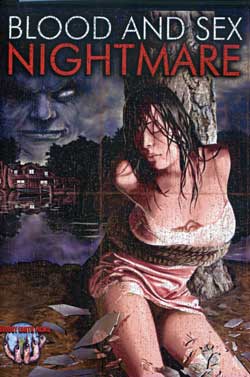 Libidinous sexually frustrated jerk Nick convinces his frigid virginal girlfriend Amy to go with him to the remote woodland swingers resort The Pleasure Mountain Adult Retreat. However, the place proves to be the stalking grounds for murderous psycho rapist zombie Felix Gallo, who starts bumping folks off left and right.

The full moon is shining brightly behind eerie, dark clouds. A rundown, abandoned house sits alone in the night; it’s a place we’d normally steer clear of, but a shadow crossing the mysterious green light in the window draws us inside. As electric guitar power chords reverberate through the night, we live vicariously through the lens of the camera as it focuses on scene after scene of horror. A pair of large, dirty hands sharpening a knife. A bloody animal skull mounted on the wall. A bloody axe. A bloody hook. A bloody chainsaw. A gratuitously long focus on bouncing boobs. Not only have we fulfilled the title of the movie in the first minute and a half, but if I didn’t have a minimum word count I could successfully end my review right here. 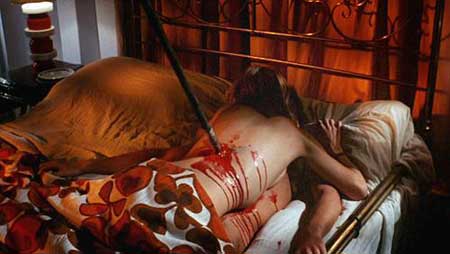 Blood and Sex Nightmare is a shot-on-video horror film directed by Joseph Kolbek (first and only directing role, but he was a behind the scenes player on Bleeding Through and Faces of Schlock). Amy (Julia Morizawa) and her boyfriend Nick (Andy McGuinness) have been dating for a while, but he is getting frustrated at the fact that they still have not had sex. When Amy returns from her father’s funeral in Japan, Nick seizes the moment and asks her to join him on a sex retreat, further proving that chivalry is not dead.

Pulling up to Pleasure Mountain Adult Retreat, the young couple is promptly greeted by the obligatory creepy local, in this case taking the form of Walter the groundskeeper. Staying true to his role, he foreshadows the evil to come when he says “I’ve got a ten inch d*ck. No lie!” Check that, it’s what he says after that, once he’s been left alone: “They’re going to be dead soon. Then she’s all mine.” 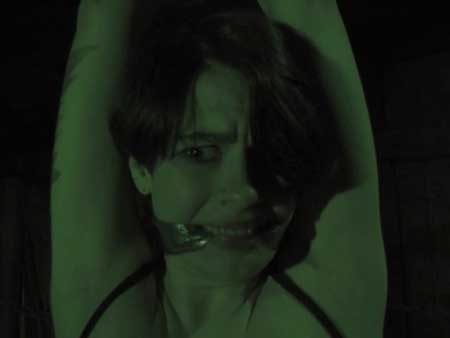 For the next half hour or so, we see various visitors to the sex retreat, first engaging in their explicit fetish acts, then falling victim to the Jason Voorhees of Pleasure Mountain Adult Retreat, Felix Gallo. Felix, as it turns out, was abandoned by his dad and molested by his mom, then killed himself in the woods where the campground was later built. The prevalent sexual energy reawakened his spirit, and now he is wreaking havoc among the sexually active guests (see also: every other slasher movie). Throughout the killings, Amy continues to have horrific visions involving eyes drooping off faces and bloody vaginas.

So much of this movie seems disjointed and extraneous. We are briefly introduced to a variety of characters only so that we can see them killed. We meet a role-playing “family” who enjoys spanking in a scene vaguely reminiscent of Natural Born Killers in that it comes complete with a laugh-track and cartoonish sound effects. We are briefly introduced to the desk clerks of the retreat as they watch an equally bad horror movie. We meet the couple that enjoys S&M and photography. And we meet some random punk kids looking for trouble and dressed as if it were Halloween. We meet all of these people separate from the main storyline and only so that we can watch them die in gruesome, gory ways.

Blood and Sex Nightmare comes complete with a heavy handedly spelled out version of the “final girl” archetype. However, one might point the writer in the direction of the works of Freud and/or Shakespeare for assistance in preparation of future works. We see women killed via stabbing, severed penis down the throat (suffocation?), and repeated stabbing of the vagina. Sometimes a cigar is just a cigar…

Blood and Sex Nightmare is the horror movie equivalent of a Kilgore Trout story: the “plot” simply covers the space between wide open beaver shots, and it’s incredibly cheap. The acting is, on the whole, pretty weak, especially the lead actor. A big part of the final sequence is straight out of The Texas Chainsaw Massacre, then suddenly takes a reckless left turn and ends up involving blood ejaculation, a mirror, and a frightening hint at a sequel. Credit is deserved as to what was created on such a low budget (reportedly about three thousand dollars). Overall, this is no more than a re-hashed blood and guts, tits and ass slasher movie, but if that’s what you’re looking for, why not support an independent film maker?