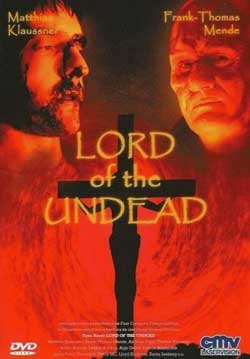 The story begins during the crucifixion of Jesus, but soon flashes forward to the present where some demons and a legion of zombies plan to wreak havoc on the Earth. Jesus himself reappears as a zombie as well.

A quick note before I begin. Lord of the Undead is a German horror movie. The version that I saw was without subtitles. Unfortunately, I do not speak German, so I had to go on context clues and visuals only. Well, aside from the Lloyd Kaufman cameo, which was in a slurred, drunken English. 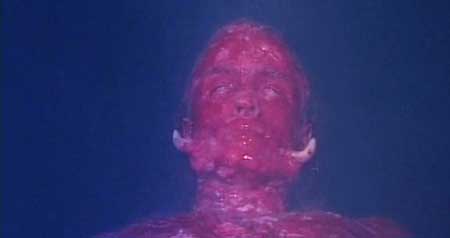 Lord of the Undead was made and released in 2004, written and directed by Timo Rose (see also my previous reviews for Mutation and Rigor Mortis, as well as Barricade, Unrated: The Movie, and FearMakers, among others). Rose is known for his splatter effects as well as his grand-scale storytelling, both of which seem to reappear in this movie. Looking through the cast listings, a lot of familiar names from Rose’s previous movies appear. Unfortunately, strong acting is not something his movies are known for. 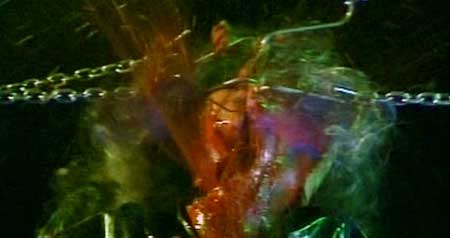 As the opening credits roll, we see Jesus on a cross. Two people approach him, both possibly demon-looking. They cut him down and start slicing him open, stealing his heart. We then cut to a guy typing away on a computer, possibly writing a script. He seems frustrated. After an emotional conversation with his girlfriend (briefly played by Xenia Seeberg of Lexx fame), he wakes up alone to a note that (presumably) says she is leaving. He calls a friend who comes over to console him. While he cries over his loss, a green-tinted guy appears at his window, walks in, and kills him, then talks to the girl for a long, long time. Maybe he tells her a story? 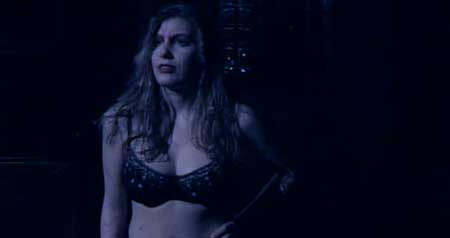 Cut to Lloyd Kaufman, in a towel, drinking straight from the bottle while cursing to his mother over the phone. He is drunk. Suddenly, a group of demons appear in his house, one all white guy and several others in hoods and black faces. They kill Lloyd, thus ending the only part in English. From here we cut to beast-like people crawling around in mud and watching a smoke cloud go by. We see Lilith (Debbie Rochon, also known as the actress from every other horror movie, but most notably a lot of Troma films such as Tromeo & Juliet, Terror Firmer, and Toxic Avenger IV: Citizen Toxie) sitting on a throne giving a monologue. We can see that she is speaking English, but a German voice has been dubbed over her own.

Horror tends to be a universal language. For example, Blutnacht 2 had a similar all-German, no subtitles situation, but thanks to the action on the screen, the storyline was fairly easy to pick up. However, Lord of the Undead is heavily dialogue based, at least as far as the bulk of the actual story goes. So it’s tough to really say what happens in this movie. It appears that there are demons who want to take over the Earth, and a guy named Ken who, for whatever reason, has decided to not let them. There are references to Jesus as well as the devil, but whether these characters play some form of either of them is anybody’s guess. 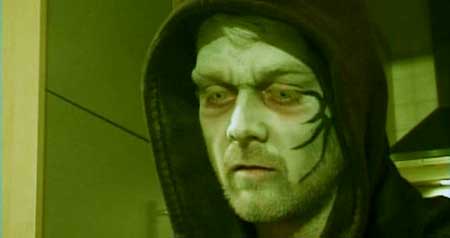 The part of horror movies that will always be universal is the gore, and this one has plenty of that. Lots of exploding heads, whether due to gunshots or strange spells/curses/mean looks directed their way. Luckily, Rose has opted for almost all special effects over CGI gore in Lord of the Undead, so credit goes to the director there. There are scenes of a pile of organs slowly congealing and pulsing, transforming into a full-sized creature. There are scenes of hooks and chains tearing bodies apart. There are scenes of skinless faces laughing at their victims. And all of them are done well. The only problem is, they were also all done well back in 1987 when they first appeared in Hellraiser. Not to say the story is being ripped off, but the shock aspects of the gore sections are hardly new territory.

Part of the fun of this movie is not knowing who these characters are. There is a man dressed in all white, with painted white skin and hair, who seems to talk like he’s been sucking helium. There is a girl whose face is painted very similar to the model on the cover of Poison’s “Open Up and Say…Ahh!” record, and she even sticks her tongue out at one point as if to acknowledge the possible homage. There are various demons who appear throughout with pretty good make-up looking creepy, but who they represent is a mystery to me.

Overall, Lord of the Undead, without subtitles, is interesting at parts, slow at others. Some good gore is included, but a lot of it all happens near the second half of the film, after multiple dialogue sections. I don’t feel right giving this a thumbs up or thumbs down due to my incomplete picture of the movie. There is some good, even if not original, gore, and the special effects seem once again the strong point. It seems an interesting story, but given my history with the director’s films I worry that there may have again been too much crammed into an eighty-six minute running time.