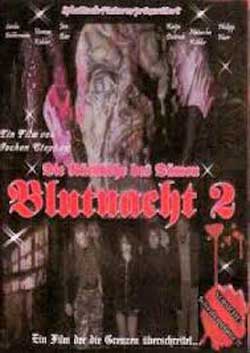 It’s been 20 years since the bloodbath in the woods took away many lives. Now the demons are back in the woods and six young friends will face them as they have to spend a night in the woods when their car has broken down.

Blutnacht 2 – Die Ruckkehr Des Damon (Blood Night 2 – Return of the Demon) is a German horror film that opens with the theme from Jeopardy! and a warning to the viewer. Translating the warning into English, it says roughly “This film is not for anyone under 18 or those easily irritated, with heart problems, or depressed. Don’t say we didn’t warn you!” What follows is a very low budget, very repetitive horror movie that attempts to add humor to its gore content but fails more often than it succeeds and leaves you wishing that you had heeded the warning.

Directed by Jochen Stephan in 2002 (the same year as part one, Blutnacht – Die Rache Des Damon), Blutnacht 2 begins at a black mass in a graveyard. People in all black, some wearing robes, chant cryptic foreign words as an unconscious girl is dragged to an altar, stabbed, and drained of her blood. The group passes around what looks like a Stanley Cup replica trophy, bright yellow price tag still on the bottom, and drink the blood from it. A guy wearing a Cradle of Filth t-shirt and carrying a sword and his girlfriend get bored and leave to make out. Apparently turned on by a makeshift grave covered in twigs and branches, she decides this is the perfect place to give him a blow job. He is so into it, he doesn’t notice a guy in a black leather trenchcoat, a bad mask, and demon gloves too small for his hands dig his way from under the branches, steal his sword, and cut him in half. Wait, sorry, what? That’s the demon? Oh boy, we’re going to need a bigger budget. 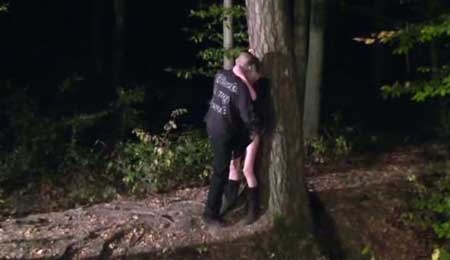 Basically from there it becomes a slasher style, “friends lost in the woods being stalked by a resurrected demon” movie. A group of six friends crash their car on the side of the highway and start walking into the woods rather than down the road. Of course they run into a weird guy who seems somehow off and I assume warns them to stay out of the forest. They decide to set up a fire at a public campground once it gets dark. And from there, of course, people start getting killed, the first victims being the ones who indulge their sexual appetites. But they aren’t just killed, they are slaughtered and disemboweled, letting us see the same set of “organs” recycled from a previous killing and now torn from a new body. 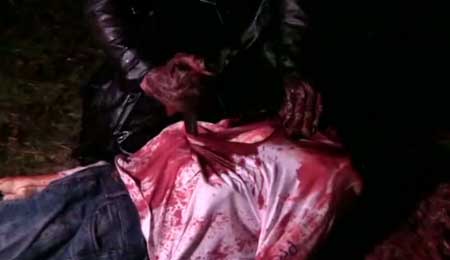 This movie has a lot stacked against it. It utilizes public access-like dissolves and edits  and shaky camera work. The sound of the wind pummeling the camera’s microphone is irritating, as is the drop in the volume of dialogue when the characters were any distance from the camera. Then again, there are NO English subtitles throughout the movie, it is all in German. This may have caused some things to be lost on me, and quite possibly ruined much of the humor of the film, but for all I know it may have been a blessing in disguise to not have any idea what they were talking about. Don’t get me wrong, I am one hundred percent in favor of low budget/no budget movies, but not when they come across as lazy. The demon’s mask is open at the back, and either his gloves are too small or his sleeves are too short and constantly show his arms. Not to mention that at one point a glimpse of his pants below his trenchcoat shows a patch of a famous National Socialist band on his leg. 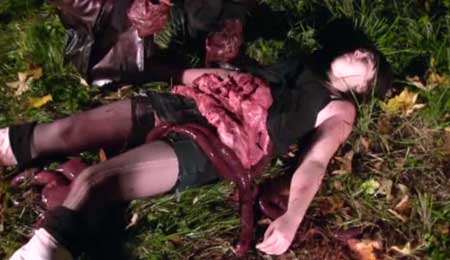 Blutnacht 2 is full of ridiculousness and blood and bad acting, but I would be willing to bet that the actors and film crew had a blast making it. The death and dismemberment scenes seem to go on forever, often cutting momentarily to a scene of people walking somewhere, then right back to the guts being pulled out to some random heavy metal song (at one point, Slayer is definitely on the soundtrack). Two separate times, a guy and girl go off on their own for some sexy time, and the girl proceeds to perform oral sex on an Andreas Schnaas-inspired fake penis, and both times the demon manages to interrupt them. For every scene that was shot too dark or too far away to hear the dialogue, there is some toilet-humor or fart noise or poop scene. At one point, when the remaining friends find a house in the middle of the woods, they start snooping through the owner’s VHS tapes, laughing at the collection, especially at the copy of Blutnacht Part 1. The weirdo in the woods character keeps reappearing, pooping behind a tree as the demon kills another person, and has “I (heart) HAM” tattooed across his bottom. 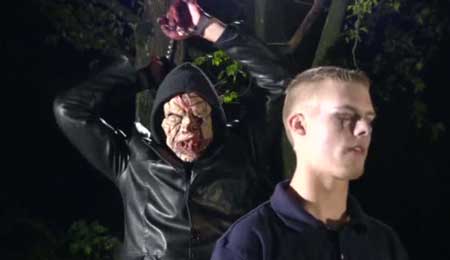 Blutnacht 2 is not a good movie as far as quality goes. It is bad on every level actually. They do a halfway decent job with a couple of the kills, but then each new kill starts to become a retread of the previous ones. I would say this movie might be one of those that is fun to throw on at a party in the background, but will again reference the fact that it is all in German with no English sub-titles. Apparently, this movie, along with part one, are very underground films and very hard to find as they were duplicated and distributed by the director himself. They don’t appear on the database of movies found on the internet nor on that one massive internet retailer page, and I found it hard to learn anything about the films aside from a translated review here and there. So maybe, if you like the thrill of the hunt, Blutnacht and Blutnacht 2 might be for you.