Home | New Paranormal Thriller, ‘Apparitional’ shows a good story is as important as a good scare

New Paranormal Thriller, ‘Apparitional’ shows a good story is as important as a good scare

The multi-talented husband and wife production team, Andrew P. Jones and Linara Washington have completed ‘Apparitional,’ a paranormal thriller filmed in the infamous Missouri State Penitentiary built in 1836. Along with co-producing the film, Jones, directed, wrote, and scored the feature, which stars Washington.

The film is about TV ghost hunters who are looking to capture ghostly evidence on camera to satisfy their demanding network executive played by genre icon, Dee Wallace. The members of the crew get more than they bargained for after a tormented man seeking relief from malevolent spirits leads them to a haunted prison.

After meeting on the set of Jones’ award-winning film, ‘Kings of the Evening,’ Washington and Jones fell in love and decided to meld Washington’s acting and producing talent and Jones’ writing and directing skills to create this chilling movie. Jones’ first-hand experience working on reality shows like ‘Hell’s Kitchen’ and ‘Nanny 911’ have given him the insight needed to recreate the experience of a reality show.

Similar to this summer’s horror hit, ‘The Conjuring’, the film’s budget was modest, but Jones’ makeup and special effects background combined with the acting and storyline, show that extravagant special effects and over bloated budgets are out; strong narrative driven films are back.

Jones’ focus on characters and plot make the film entertaining and allows the audience to connect deeper to the situation than simply sitting on the edge of their seat.

Washington, who plays the part of a TV producer in the movie, explains that actually being the producer of this film helped her jump into character. “Although it was challenging doing both jobs, making this film has given me a deeper appreciation for those who stay on set after the film day is over,” says Washington.

Although this is the first film Jones and his wife, Washington have created together, they hope it’s the first of many from their film production company, Picture Palace Films. 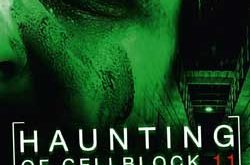