Ah, what a nice little box of evil this is. Our friends at SCREAM FACTORY sent over the details on their Blu-ray box set of THE AMITYVILLE HORROR TRILOGY. A must own for any respectable horror fan and this set is going to be loaded with coolness. The press release breaks it all down so check it out:

Holidays arrive early this year for horror fans and pop culture enthusiasts. Prepare to bring home one of the most iconic haunted house movie collections! For the first time ever, experience three original classic AMITYVILLE horror films collected together on 3D Blu-ray!

There’s no place like home…for bloodcurdling horror! For George and Kathy Lutz from THE AMITYVILLE HORROR, the colonial house on the river’s edge seemed ideal: quaint, spacious and amazingly affordable. Of course, six brutal murders had taken place there just a year before, but houses don’t have memories…or do they? Soon the Lutz dream house becomes a hellish nightmare, as walls begin to drip blood and Satanic forces threaten to destroy them. Now the family must try to escape or forfeit their lives – and their souls! One of the most talked-about haunted house stories of all time, THE AMITYVILLE HORROR is a spine-tingling tale of a house possessed by unspeakable evil. The film stars James Brolin (Christine, Traffic), Margot Kidder (Halloween II, Superman) and Rod Steiger (In the Heat of the Night, Doctor Zhivago).

Before the residence at 112 Ocean Avenue became infamous in THE AMITYVILLE HORROR, its supernatural legacy of terror had already begun. Inspired by the true story, the chilling prequel AMITYVILLE II: THE POSSESSION is a horrifying, special-effects laden encounter with pure evil.

Although the Montellis are not exactly the “perfect family,” at least they’ve found the perfect home. And even though a liquid that looks a lot like blood starts gushing from the kitchen faucet and every window has been nailed shut, it still qualifies as their dream house – until all hell breaks loose! A local priest (James Olson, Hawaii Five-O) tries to rid the house of unclean spirits, but what he doesn’t yet suspect is that teenage son Sonny Montelli (Jack Magner) has been possessed by a murderous demon hell-bent on total destruction. Also starring Burt Young (Rocky), Rutanya Alda (Mommie Dearest) and Diane Franklin (Terrrovision).

In AMITYVILLE 3D movie, the house of unspeakable evil is back to torment all that cross its threshold as Dino De Laurentis and legendary director Richard Fleischer (20,000 Leagues Under The Sea) present “a horror picture of considerable class and polish” (Los Angeles Times)!

To debunk the Amityville house’s infamous reputation and take advantage of a rock-bottom asking price, skeptical journalist John Baxter (Tony Roberts, The Thorns) buys the place and settles in to write his first novel. But as soon as the ink on the deed has dried, people who have come into contact with him – and the house – begin to meet with a shocking fate. Is it coincidence… or is this house really the gateway to hell? Tess Harper (No Country for Old Men), Lori Loughlin (90210, Full House) and Meg Ryan (Proof of Life) also star in this 3D terrorfest!

All the haunted house fun will be hitting on Oct. 1st so start saving your pennies now or if you like you can CLICK HERE and give this set a pre-order and get yourself a nice little extra treat. While supplies last folks pre-ordering will also get a nice little mini poster of the newly commissioned artwork. You know you have to have that hanging on your wall. 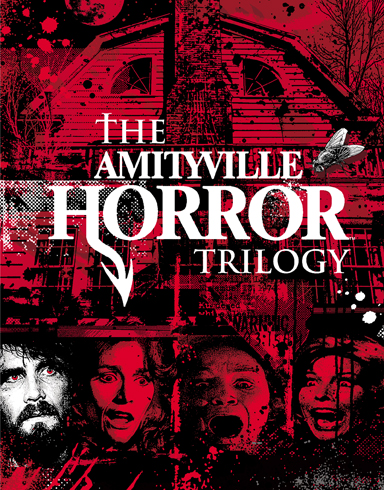