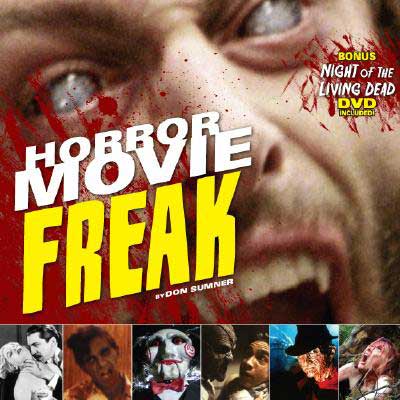 Well it was about due time for a new horror genre book to cross my table as its been a bit of a dry spell. Of course that means that books on the market then fail to acknowledge some of the newer films into their releases. Hence comes along “Horror Movie Freak” chock full of wisdom, reviews and best of all “lots” of pictures. That’s right, we horror viewers will sit and read thru reviews about films we’ve all seen but without pictures it can become a bit tedious. Great thing this latest release written by Don Summer who also happens to run the “Best Horror Movies” web site decided to put some serious time into a great looking release.

Yep, chock full of color too, which is a big plus when your looking at modern horror pictures. The Book is centered around the idea of the reader / viewer who might refer to himself/herself as a “horror movie freak”. Of course anyone who is in this business can attribute to that classification, so we’re all on the same page. Though even with this book being dedicated to “horror movie freaks” I thought it might server better to those who are not as educated in the fields of madness. For the perfect scenario is a newcomer who needs to indulge in the genre and is clueless on what films to choose and why.

Breezing thru, it’s safe to say I’ve seen every movie in here, save for maybe a few old time classics that I haven’t seen since maybe I was a child. However it’s still good to see what the author refers to as the essentials of viewing. The book is broken into categories which on the most part is pretty accurate. Though sometimes I would question a choice not on the film itself, but on the placement. As Phantasm is placed among “Alien” films and “Cabin Fever” placed among “Nature Films”. Sure I do get why he might choose those but from a simple perspective they probably could have existed in a more like category. Another odd choice was say the Monsters category, which included “Midnight Meat Train” and left out say, Jeepers Creepers. At this point, I was beginning to wonder if the editor mixed up some pages??

Readers will be happy to find out that there is a “healthy mix of new school and old school films mentioned. I know it’s always hard to fine tune picks in these kind of books, but at least it’s not all 1 era sided. The old school is a healthy dose for that which influenced thy new school even if the black and white films tend to put you to sleep, you should get up to speed on the genre legacy.

What is important here is that this book looks good and reads good. Nicely printed paper, easy to read and again lots of color pics. There are some chapters that explain genre categories especially as intros but on the most part it is a book of reviews. Nothing wrong with that! This read is meant for Borders and Barnes and Noble readers. Why I say that is because some books on the market get too philosophical for general interest and “Horror movie Freaks” is perfect for the masses. Oh ya….bonus…it comes with “Night of the Living Dead” DVD! A great package of horror that tells it like it is and delivers on all accounts. 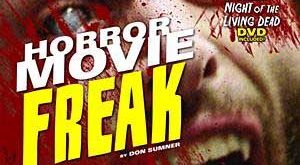