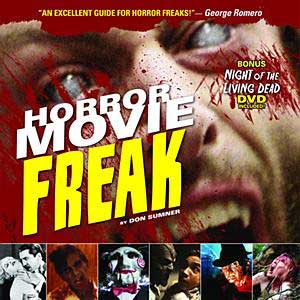 So, what is a Horror Movie Freak?

A Horror Movie Freak is a passionate horror movie fan. There are degrees, though, of horror freak ranging from the super-dedicated fan who knows every director, release date, indie film and actor with posters and memorabilia all over the place – to those who just love horror movies and will always choose them over the ultimate evil: romantic comedies. I’m somewhere in the middle myself. I can’t even remember the last movie I saw that wasn’t horror… something stupid like Chariots of Fire or some other such nonsense.

How did you compile what movies would make it into the pages of your book?

There were lots of sources for the “master list” that formed the starting point. First, we have an annually updated list of the 100 Best Horror Movies on Best-Horror-Movies.com that has been constantly improved since 2006 by adding new horror releases and nominations by site visitors. That contributed a few hundred. There was also a list on the BHM community forums of the “indisputable horror movies” that was created by community members, so we added all of those as well. Finally, there is a panel of experts who assisted with the movie selection and assignment of sub-genres, and they all added films to the mix based on their experience. The result of all that was a list of over 500 horror films that were organized into their appropriate subgenres and I chose examples from each subgenre myself for inclusion in Horror Movie Freak.

Did it take long to gather ALL that information?

Horror Movie Freak was worked on directly for about 7 months, but technically this has been a work in progress since the launch of Best-Horror-Movies.com in 2006.

How many movies are featured in this book?

There are about 130 films featured, with between 5 and 10 mentioned in each horror subgenre, plus 10 films to watch leading to Halloween.

What decade would you say produced the very best in horror movies?

The 80s were the best, no question. The 70s got us started with Black Christmas and Halloween, and the 80s exploded with many of the most awesome horror ever. Jason Voorhees and Freddy Krueger were born, The Evil Dead, Return of the Living Dead, the Jamie Lee Curtis horror films… there’s been great horror since, but the 80s are the golden age.

How did you decide what photo to use for the book cover?

The publisher decided on most of those, based on films that were going to be discussed. The main photo is from a film that I wasn’t going to include… but the photo choice had me writing at the last minute. Ah, publishing…

What is on the disk that comes with the book?

There’s a pretty good print of Night of the Living Dead, and an intro to that film that I did myself. It was great to provide a bit of introduction to such a classic. I have been amazed how many younger horror freaks have never seen that film – shocking! Hopefully we put a dent in that…

Are there any movies that you wanted to put into the book, but maybe there just wasn’t enough space?

Oh, man… so many. Because the film choices were based on representatives of all of the different subgenres of horror, there were tons of circumstances where some incredible films had to be left out. The Monsters and Zombie Invasion categories, for example, had a ton of great films. And what about the classics? That’s a encyclopedia set of great films by itself. Horror Movie Freak is a great guide for aspiring horror freaks and an awesome listing of favorites for seasoned aficionados… but it just couldn’t be complete.

What is next for Don Summer?

We recently launched a podcast series on Best-Horror-Movies.com, and I’m using Horror Movie Freak as a guide to those who will be interviewed. Have podcasts for 3 of the 4 Scream Queens which include Adrienne Barbeau, Dee Wallace, and Debbie Rochon. These women are mentioned in the Scream Queen series, with the last coming soon, and am starting the Director Series. Lots of cool stuff… Beyond that it’s hard to say – just going where my passion for horror leads. What can a fan find at your website www.best-horror-movies.com/ ?

Best-Horror-Movies.com has horror movie reviews including big studio and Indie micro-budgets as well as horror news, the annually updated 100 Best Horror Movies list, discussion boards, video content, user blogs, podcasts, articles about horror villains and heroes and lots of options for fan input, from horror reviews to horror lists to stories about being a horror addict. The Horror Freak Brain Trust is extremely popular, as fans can ask the Horror Freak Universe about a horror movie that they remember some tidbit about but can’t remember the title, and they get their answer just about every time. It will bring a tear to your eye… LOL 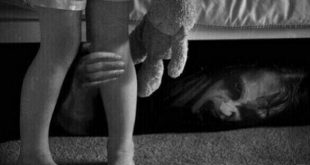 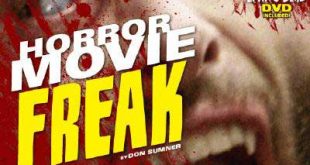