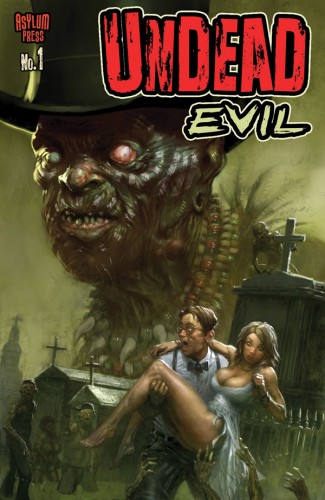 Asylum Press announces the release of a new horror comic entitled Undead Evil.  A digital first comic book, Undead Evil will be released on all digital platforms on July 17, 2013.

Undead Evil is the tale of Alfred Carter and his attempt to save his estranged family from a centuries old Voodoo curse.  Written by Frank Forte (Heavy Metal, The Vampire Verses, Asylum of Horrors) and illustrated by Nenad Gucunja (Satan’s Circus of Hell, Girls and Corpses, Warlash) with a painted cover by Ben Olson (Area 51:Blacksite, Drakan 1 & 2, The Suffering,

Undead Evil takes place in New Orleans in the immediate aftermath of Hurricane Katrina. A centuries old family curse is reignited by an undead Voodoo priest and paranormal researcher Alfred Carter begins to have disturbing visions of the past, present and future. When Alfred is summoned by the ghost of his ancestor, he must travel to The Big Easy to cleanse his bloodline. What he finds are untold family secrets and a descent into madness. This twisted tale can be described as H.P. Lovecraft meets Angel Heart.  Issue #1 features a Nenad Guncunja sketchbook and Ben Olson cover art process section.

“I’m excited to finally release the first issue of this mini series,“ explains creator Frank Forte, “Nenad Gucunja is an incredibly unique and talented artist. He was the prefect choice to illustrate such a horrific tale.  His illustrations will bring a chill up your spine.”

Undead Evil #1 is available on Comixology, ComicsPlus, Graphicly, My Digital Comics, DriveThruComics, AVE Comics and can be found on on iPad, iPhone, Kindle, Android devices, Mac, and PC.

ABOUT ASYLUM PRESS:
Asylum Press is a publishing company that produces premium comic books and graphic novels within the horror, science fiction, and action genres. Asylum Press’ books feature original, character-driven stories and cinematic artwork by top creators and newly discovered talent that will appeal to not only comic book fans, but also mainstream fiction readers who don’t normally buy comics.  Asylum Press delivers high-concept books via a bold new business model that focuses on digital publishing and new distribution outlets in both the American and international markets.  Asylum Press is distributed by Diamond Comics Distributors and Tony Shenton and to the Booktrade by SCB Distributors, Ingram and Baker and Taylor.  Distributed in the U.K. by Turnaround Distribution. 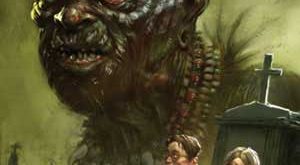