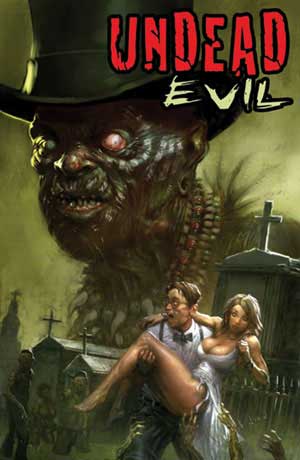 This first edition debut from Asylum Press goes by the title of “Undead Evil” and is appropriately numbered #0. It’s beautifully morbid cover stands out enough to draw you into the world of the undead as penned by author Frank Forte. The artwork by Nenad Gucunja is presented in high contrast pencil work and inking’s which has its own look and feel with this high caliber read.

The story starts us on the quest of curiosity seeker Alfred Carter. Alfred is a curious one alright. He takes it upon himself to translate a finding of dark tomes that he uncovers in his mothers attic. His persistence pays off and he awakens the spirit of his great ancestor Maximillian Carter. It is revealed that Alfred comes from a long lineage of dark magic and that a war is about to unfold. A war a long time coming from former rival Laveau. Alfred is given the mental tools and information per spirit transcendence to seek out the where about’s of Laveau’s tomb before its too late. This embarks Alfred on a mission into New Orleans, and a exploration into voodoo and magic. This is where this edition ends till next release.

Frank provides an very cool voodoo story filled with talks of Necronomicon and old lore magic. We haven’t gotten to the zombies yet, but you know its coming. The final battle should prove to be interesting in the issues ahead.

My only qualm on this edition was that it was a bit wordy which obscures alot of the fine artwork. Almost to the point that maybe it deserved a few more frames so the writing could be spread out a bit more. the number of word bubbles can be overwhelming on the eyes squeezed into such a tight arrangement.

The homepage on this title had the pages as they are without word bubbles which is a bonus so you can see the detail pencil work better.

This special edition contains several takes on the cover art by Ben Olson. All of which are good in my opinion. Though you can experience the artist’s process as he works though composition and color choices to get the piece to his comfort level. These are displayed in the books final 3 pages. Though unfinished you can still get a taste of where the piece was going. Prior to that we have some concept sketches (per Frank Forte) on the characters within including an excellent pen and ink collage of Nenads zombie work. Very striking and detailed and a personal highlight to me. The book itself, I’d love to see where the series continues. From checking, it looks like you can obtain this title as a TPB (64 page Graphic novel). That would be my choice as the story is interesting enough to have a need to see it through. Though upon this review it appears it doesnt ship till Dec 2009. So book mark this PAGE and if you can wait, then go for the full deal 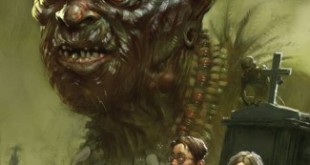