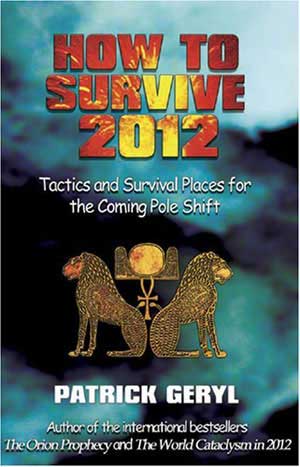 What if someone told that the world was gonna end in 3 years? What if they told you that it wasn’t just a prophecy or conjuring of magic but based on scientific facts? How would you lead your life, what would you think? Well if your like me, despite all the evidence you would hope that staying positive would overrule everything.

Now what if that date they speak about is only 3 years away? Heck I’ve stayed at jobs longer than that. Patrick Geryl author of “How to Survive 2012” is no prophet and no charlatan. As he states he has spent weeks, days, and years decoding the information available and defrauding the evidence to arrive at his conclusions. The word is, it doesn’t look good! While my mind may take longer to patch together the scientific facts, its easy enough to read between the lines. What were the Mayans, and Atlantians trying to tell us? What about the Hopis that call our cycle the 4th cycle of civilization. Even with details coded in stone to last the tests of time, we still claim ignorance into the scientific field about what awaits. Scary is an understatement as presented by Patrick’s work. The first 40 pages goes into plenty of detail about the magnetic field and the potential of the poles to shift based in the earths core. As explained, the combination of axis shift potentially caused by a slow down in the earths core could easily wipe out our existence with raging tidal waves, flooding, earthquakes and volcanoes.

Supercataclysm, are we in danger of cosmic radiation? Are the sunspot theories an impending reality that is part of our universe plan? We’ve heard of supernovas and seen re-enactments in movies, can science fiction cross over into our current state and change the face of our entire scope of existence. These are all hard subjects to read and then worry about. It’s much easier to grab a pizza and watch late night TV. I imagine even a book like this that may inadvertently prophesize our coming days will meet with skepticism because denial is easier.

As pointed out, events could trigger major tidal waves and water based disasters. High grounds may be the only saving grace. Then its pointed out later that solar radiation will effect those in higher grounds and those nearer to the water level will be less effected. So which is it?

Patrick points out that history holds proof that a terrible disaster occurred in our past so dramatic that in one day and one night the earth changed its axis and rotational direction resulting in an earth crust shift that catapulted the complete environment into different climatic zones.

Pages 68-71 summarize in short paragraphs all the potentials that could occur in the next few years. Climate changes, volcanic activity, oil rig contamination, loss of all energy supplies, food shortage, medial practices reduced to ruins….and there’s more! This could possibly be the most depressing book on the planet…..so I’m really hoping he’s wrong on all accounts.

I found the “rebuilding” section especially intriguing. Use of urine to cultivate fruits and vegetables. Purifying water though UV rays. This list goes on. Essentially you have all the ingredients to stay healthy and replenish your vitamin content. A diet plan and rebuilding agenda is given. On that basis more details are covered on rebuilding a civilization, important needs and essential locations. You want proof? Geryl gives us a whole chapter on calculations done to come to these conclusions. It appears that the facts are pretty substantial. From here on is a matter of choices.

The most compelling and frightening aspect of this book is that the author talks and believes every word that is written almost to the point of saying..your all going to perish, and in the next 3 years. Now of course we’ve seen our share of prophet and fortelling books but what if he is correct?

This is mostly based on scientific facts and present results, not some old manuscript that some nomad dug up in a desert. Is it time to live life and prepare or just anticipate what could arrive and hope your ready. The thought that occurred most to me was a simple fact. Alot of things are mentioned. But it only takes one of those to change our way of life. One or all…does it matter or are we doomed? What Patrick is saying is …folks here are the facts. Stay alert and look for signs because they all point to an event just around the corner. For survivalists the preparation pages will be of great help in planning your days ahead.