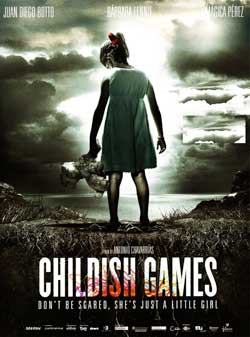 Dictado (aka Childish Games) tells the story of a childless couple, Daniel and Laura, both teachers, who are confronted by an unusual situation when Mario, a childhood friend of Daniel’s, turns up acting strangely and wanting them to meet his daughter, Julia. Daniel manages to get rid of him, but the next day he learns of Mario’s suicide. Julia, who is now an orphan, ends up being taken in temporarily by the couple, despite Daniel’s discomfort at not only the strange encounter with Mario but also the excessive enthusiasm of Laura at playing the role of mother. The tension builds as Laura tries to help Julia regain the will to live and Daniel begins to feel threatened by some of Julia’s behaviors, as well as the apparent awakening of memories of a terrifying past involving Mario that he thought he had put behind him.