Home | HATCHET III Blu-ray News Crawls Out Of The Swamp

HATCHET III Blu-ray News Crawls Out Of The Swamp

Well, the HATCHET III VOD run has come and gone and now it’s time for the Blu-ray and all the info you need is here.

Victor Crowley is back in HATCHET III, the new installment in the horror series about the swamp dweller who slices and guts his luckless victims apart. Kane Hodder returns as the hideously deformed Victor Crowley and Danielle Harris again plays the intrepid heroine Marybeth in the new movie, which arrives on Blu-ray and DVD from Dark Sky Films on August 13, 2013. The film will be available in both R-rated and unrated director’s cut editions. The Blu-ray has an SRP of $34.98 and the DVD will be priced at $27.98.

While a heavily-armed team of mercenaries takes to the bayou surrounding Crowley’s home, Marybeth finds herself begrudgingly teaming up with a local policeman (Gremlins star Zach Galligan) and his ex-wife (Caroline Williams, Texas Chainsaw Massacre 2) – an expert on the maniac who may have uncovered the secret to ending his murderous rampage once and for all.

The unrated version of the Blu-ray and DVD will feature a extras that can’t be missed:

Hatchet III: Behind The Scenes featurette 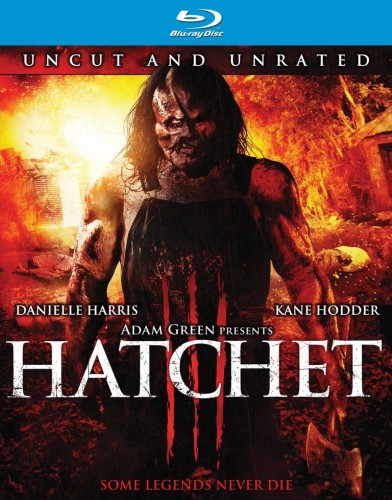