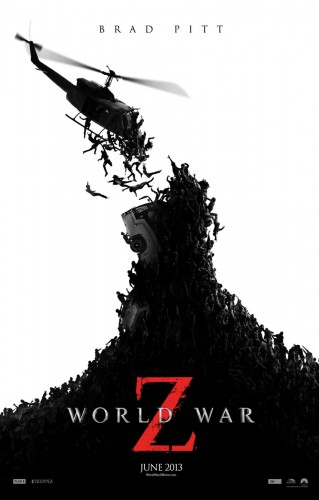 This book includes the entire screenplay for the film version of World War Z as well as a look at how the zombies were designed and brought to life (or I guess that should be brought to unlife) for the big screen.

I have to be honest and say that I don’t care anything about World War Z. I don’t want to read the novel and I really don’t want to see the movie. I thought that the trailer made the film look like a complete and total train wreck (why is Brad Pitt involved?

Why are all the zombies done via horrible-looking CGI effects) and after I saw it I knew that it would never actually see it because it looked like your typical pile of Hollywood dreck that is vomited into theaters during the summer months that makes millions of dollars for some unknown reason despite the fact that in reality it sucks out loud on every possible level. I personally think that the whole zombie thing has run its course and that this movie showed up a little too late for the party.

Even the emo/hipster kids (who make up a large part of this film’s  target audience) who hang out at Hot Topic buying  Adventure Time merchandise are starting to tire of the zombie thing and have started to move on to something else. While I am sure that there will be a few more zombie movies to hit the scene within the next couple of months or so I think that World War Z will be the last big attempt to do an epic zombie apocalypse flick.

While I don’t care anything about World War Z I know that there are a lot of people out there who do. If you are one of those people then The Art of the Film World War Z is just for you. I think that the book is very well-done and despite my feelings for the subject matter that it covers I think that it is a must-have for anyone who loves World War Z. If you are one of those people (like me) who loves to read movie scripts then you are in luck as the biggest majority of this book is made up of the film’s screenplay (is it just me or does anyone else think it is a little odd that Max Brooks-who wrote the original novel the movie is based on-had absolutely nothing to do with the script?).  There are also many screen shots from the film for you to enjoy as well while you read the screenplay which I thought was a nice touch. I also liked the fact that the book includes many storyboards and some early artwork for the film too as I just dig those kind of things as it makes me feel as if I am getting to peek behind the curtain so to speak to see some of the inner workings of the film making process.
The book also has a section devoted to looking at the zombies themselves. This part of the book takes a look at how the zombies were designed and created, and there are several interesting quotes from Andrew R. Jones (who was the animation consultant for the film) and others who worked on designing and creating the zombies. While I personally thought that the zombies were anything but impressive and looked like poorly-done video game characters I have to admit that I admire and respect the fact that a lot of a very hard work went into the process of bringing them to life at the hands of a lot of talented people (though I did have to laugh out loud when I ran across a quote from the visual effects supervisor who proudly proclaimed that they spent two years blending and animating the zombies. They all look exactly alike and there is nothing special about the way that they move or anything, so it just seems like everyone involved wasted their time for these two years they spent toiling away for basically nothing).

The Art of the Film World War Z is not for me, but if you are a fan of the movie then you should pick up a copy as you will love it. I think that it is a pretty neat book for fans and even though there are a lot of pretentious quotes about how wonderful the movie is from some of the people involved (the most vomit-inducing and arrogant ones coming from director Marc Forster, David Morse and Matthew Fox) I still believe that it is an interesting and well-put together book. If you are a fan of World War Z you should grab a copy of this book as you won’t be disappointed and will really enjoy it.