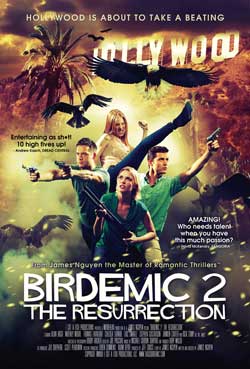 Director/Screenwriter James Nguyen made something of a name for himself when his first film, “Birdemic: Shock And Terror” was released in 2010. The self funded film told the story of an attack from above by hordes of angry Eagles & Vultures and became an underground cult classic due to it’s inherent awfulness. Although I haven’t seen it myself, I’ve read a lot about it and I’ve always thanked the big film critic in the sky for somehow steering me clear of it as I don’t think I could’ve dealt with the badness of it all. 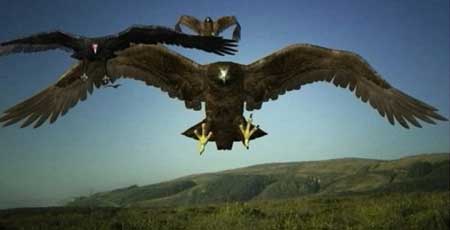 But I’ve obviously been a bad Black Saint because guess what arrived in my mailbox today? It’s called “Birdemic 2: The Resurrection” and lemme tell you something right here and now, I deserve a f*cking medal for sitting through this film. Nothing on god’s green earth could prepare me for what I experienced while watching this movie. It’s like I ingested a really bad batch of shrooms and hallucinated the entire experience. I can still see the colors, swirling round my head like little rainbows…

There is a semblance of a plot, but only that. A budding director, Bill (Thomas Favaloro), has gotten the funds to film his magnum opus to be called “Sunset Dreams” and he hires a waitress, Nathalie (Whitney Moore) to star in it. Along the way they frolic with the executive producer of the film, Rod (Alan Bagh) and his budding actress girlfriend Gloria (Chelsea Turnbow). The first 40 minutes of this movie is comprised of a bunch of poorly filmed, disjointed scenes of the quartet smiling, laughing, drinking, eating, dancing and walking. A whole lot of walking. 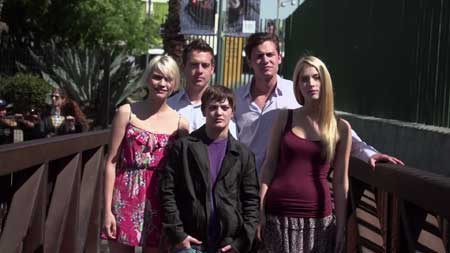 While visiting the La Brea Tar pits they meet up with their old pal Dr. Jones (Rick Camp) who tells them how prehistoric birds are completely preserved in the tar. Not only that but there are actual prehistoric humans completely preserved in the tar pits as well! He tells them a quick story of how birds back then were enormous and often attacked cavemen, the example we’re given is of a prehistoric couple being attacked and killed by a horde of birds while they’re having sex. Yeah…I can’t believe I just wrote that either. Anywho, after his little story he happily waves goodbye and is gone from the film but he’s planted the seeds for the plot to go all haywire as later that evening, a strange red rain falls which somehow resurrects all of the birds from out of the tar pits! Oh…the horny cave couple come out of the tar as well, still wearing their animal skins. And boy are they pissed off…

From then on all sense and sensibility is tossed out the window and “B2” becomes a series of horribly written and acted scenes with our core group being joined by a few others who were working on the film they’re supposedly making. The dang birds come out of nowhere too, they’re like ninja birds who mask their arrival until the last possible moment (or until someone looks up) and then they strike with the fury of a thousand horrid CGI creations that look like something that was created with a Playstation. They sort of just float in the air and mechanically flap their wings and when they’re shot they split in two pieces and fall to the ground. That or just blow up…just as if they were in a videogame. 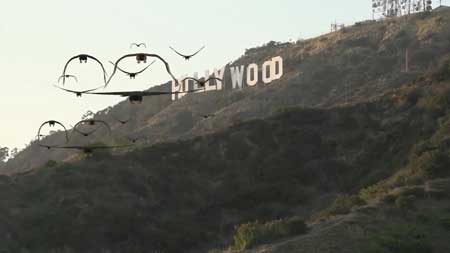 But the birds weren’t enough for my pal James Nguyen though! That darned red rain goes and falls on a cemetery and you know what that means…ZOMBIES!!! I just wanna credit Mr. Nguyen for making sure that all of the zombies came out of the wet ground with extremely clean shirts on because a dirty zombie is…well, he’s a dirty zombie! And we musn’t forget our angry cave couple either, they’re pretty clean as well and they’re loose on the streets of Hollywood, looking for trouble and some bad actors.

Why am I even bothering with this? Apparently the first “Birdemic” film is hilarious because Nguyen was unaware of how awful it really was, he thpught he was making a great film. I can’t decide if Nguyen is in on the joke now and he’s just milking it or if he really thinks he’s created another serious horror film with this misbegotten mess of a movie. If you’re looking for laughs then I suppose you’ll get a few out of the ridiculously bad acting on display here but the film is so slow that the bad acting just wore away at my psyche like cheese on a grater. They only had one facial wound appliance to use because each and every victim of the birds wears it on their face so the less said about the makeup effects the better. And the script? It’s full of lines that seem to be written by someone who’s just learned how to speak English. 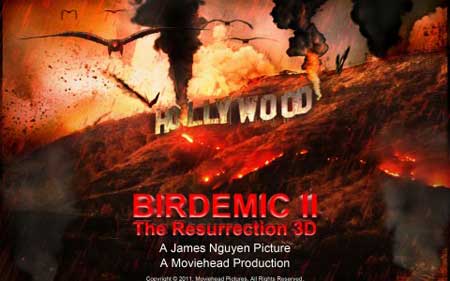 For example:
Will: What is your name?
Jessica the Cowgirl: Jessica.
Will: I’m Will, and I’m a screenwriter.

Or maybe this little exchange?:
Bill: Hey, we should go into that zoo. There may be people in there?
Rod: Wait, wait, wait… the last time we we took detours we went into that cemetery, and you remember what happened? We were attacked by those zombies. I’m not going through that again!

One more for the road:
Tony: I wish Susan could’ve been here to see this bird skeleton. But she got a disease from that fish that Rod cooked.

There aren’t enough negative words in the dictionary to fully describe the awfulness on display here but still I wonder whether this is all intentional or not? If it’s intentional then it’s just a really, really bad spoof of the original “Birdemic”, but if it isn’t and Nguyen thought he was really making something watchable (as he did with the original film) then he shoots to the top of the F.B.I.’s “MOST WANTED” list. He is truly a menace to civilization if that’s the case and must be stopped at all costs. 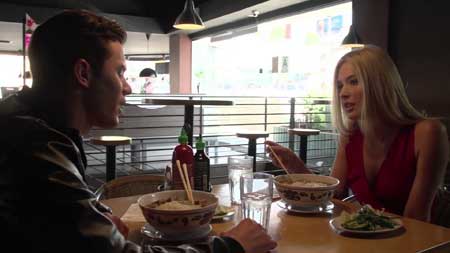 The film ends with a 75 second scene of the wretched looking birds flying away from the city. Now maybe that doesn’t sound like a long time but you try staring at some horribly animated birds flying away from the screen in what looks like slow motion (But it isn’t. Watch carefully, they do get smaller as they fly away), the whole scene is oddly hypnotic but still crappy. And the film is rife with errors that my 11 yr. old would’ve caught, cameramen seen in reflections throughout the film? Check. Accessories changing in the same scene, while people are still wearing them? Check. The back door of the car that the cameraman is sitting in while filming a scene of a car driving still in the shot? Check. The cameraman’s hair blowing in front of the lens in that same shot? Check. How about the CGI jellyfish that attacks a woman whose flailing her legs in front of a rear projected ocean? Check, check, checkitty check! And there are a couple of Hitchcock references clumsily inserted into the script also, just in case you don’t know that he directed a film called “The Birds”. It’s all in here people and if crap like this floats your boat then you’ve come to the right place.

Don’t get me wrong, I love crappy films with all my heart and soul, but they’ve got to come from the heart. It’s easy to make an intentionally bad movie, it’s not so easy to make a bad movie when you believe you’re making a good one. That takes a lot of hard work and faith in what you’re doing. Nguyen had that in the first “Birdemic” but I fear that he’s fallen prey to the hype and is just trying to replicate it’s awfulness. That’s a shame because he apparently achieved something biblically bad his first time out, something that’ll go down in bad movie history and a scant few years later instead of trying to move forward and make something decent with the lessons he learned from his first film he’s just resting on it’s laurels, dubious as those laurels might be.

Maybe Nguyen should’ve listened to a line from his script before he made this movie: “It’s not about babes, boobs and blood”. As stupid as this might sound to all of you, film making is all about heart and soul. No matter how crappy Ed Wood Jr’s films are each and every one of them came from his heart and he put a bit of his soul in all of them. He believed he was making high art and that’s why his name is still recognized today by cinephiles the world over. It feels like Nguyen shot his wad making his first film and is perfectly fine shooting blanks here in his second one.

“Birdemic 2: The Resurrection” – Zero shrouds (If Nguyen was serious). If not (and he’s trying to be bad on purpose?) -25 shrouds. It’s the worst thing I’ve sat through this year either way. 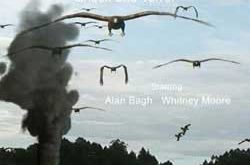 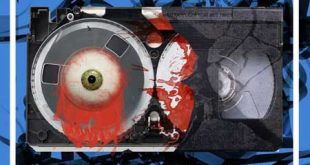