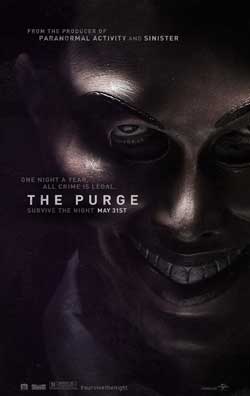 A family is held hostage for harboring the target of a murderous syndicate during the Purge, a 12-hour period in which any and all crime is legalized.

I first heard of this film 2-3 months ago and I distinctly remember thinking what an absolutely awful idea it was for a film. Then again, the idea of an ancient Indian Medicine man reincarnating himself thru the back of Susan Strasberg’s neck (THE MANITOU) makes perfect sense to me, so maybe my logic is a bit askew. Either way I still thought it was a dumb idea, having 12 hours during which any and all crime is absolutely legal just sounded dumb. So imagine my surprise when I actually sat down to see the film and found myself fairly engaged in the whole thing…for awhile. 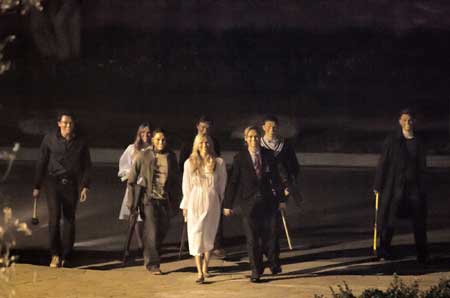 The year is 2022 and the U.S. is being run by a new political party that’s known as “The New Founding Fathers Of America”. Apparently things like crime & unemployment were at all time highs and the country was going to hell in a hand basket but these guys came into power (How is never divulged) and their idea of having half a day during which any and all crime is absolutely legal turned the country around. According to director James DeMonaco’s script, having the populace run roughshod over each other for 12 hours acts as a type of catharsis for all law abiding citizens (What it does for the criminals isn’t something anyone seems to care about). James Sandin (Ethan Hawke) is an extremely successful home security salesman who, as the film begins, is on the way back to his palatial (Yet cozy) home. He’s on top of the world since he’s just been told that he’s finished in the number one slot in his company for having sold the most security systems for the fiscal year. His dutiful wife, Mary (Lena Headey) is at home preparing dinner while his two children Zoey (Adelaide Kane) & Charlie (Max Burkholder) are doing their own things at home. That means Zoey is in her room making out with her boyfriend and Max is tinkering around with a extremely creepy looking spy cam that he’s built on his own.

The period of time during which all crime is legal is known as THE PURGE and in the tony private neighborhood where the Sandin family lives everyone is casually preparing themselves for 7PM when the whole shebang kicks off and no one seems especially concerned with what’s to follow. Dogs are being walked & neighbors are saying “Hi” to each other as they discuss their plans for the evening. Neighbor Grace Ferrin (Areja Bareikis) even comes by with some cookies for the Sandin’s commenting on how successful a year they’ve had and congratulating them on the new addition they’ve made to their home. Later in the evening, James returns home and the family sits down to dinner together. During this scene we discover that Zoey is rather ambivalent to the purpose of purging and Charlie doesn’t understand why violence of any kind is a rational solution to anybody’s problems. But James (And everyone else) believes in the power and purpose of “Purge Day” and soon after dinner he begins to prepare his home by checking on their seemingly iron clad security system. And a few minutes before 7, the family again gathers to watch as he activates it which causes thick metal sheets to come down over all windows and doors in their home. Essentially cutting them off from the expected violence that is expected in their neighborhood.

Soon after lockdown, Charlie is watching a monitor showing a live feed of what’s going on outside when he sees someone covered in blood, running down the street, begging for someone to help him. Charlie takes pity on him and deactivates the security system just long enough to let the stranger in but he has a gang of armed teens chasing after him and once they discover that he’s in the Sandin’s home, they make the family an offer: Give them the fugitive and they’ll leave in peace, continue to harbor him and they’ll kill everyone inside. James wants to give the stranger (Edwin Hodge, credited only as “Bloody Stranger”) up immediately but he’s already gone, hiding himself away in their home. Meanwhile the thugs manage to cut off the power to the house and announce that they are awaiting “Munitions” that will allow them to break thru the metal sheets protecting the Sandin’s and if they don’t give up their guest before they arrive they’ll enter the home and kill everyone…legally.The film then turns into a siege with the Sandin’s looking for their unwanted guest and the thugs patiently waiting outside.

For the first 60 minutes of “THE PURGE” I was surprisingly focused on what was going on and so was the audience I watched it with. There actually is something to the plot and the silence of the audience was proof of that, all of us were extremely vested in what was happening on screen. I guess that’s testament to the inherent power of the script, silly as it all sounded to me. But in the last 25 minutes the house of cards that was DeMonaco’s script falls completely to the ground and the film devolves into a meaningless bloodbath that only serves to magnify what was wrong with the whole idea in the first place. There’s no good way to end “THE PURGE” because it’s a dumb idea to start with and it’s nigh impossible to make any of this nonsense plausible. I was really into what was going on but that’s testament to some strong performances not the script although, as I said earlier, I think there’s something here that in the hands of a better director/screenwriter might’ve really been something special. I’d love to see what Kubrick could’ve done with this idea but DeMonaco is no Kubrick and although there are echoes of “A CLOCKWORK ORANGE” here, “THE PURGE” doesn’t even reside in the same cinematic galaxy as “A CLOCKWORK ORANGE”.

“THE PURGE” is the kind of film that withers under close scrutiny which only makes it more disappointing since it starts out so well. Once I left the theater I came up with all of these “Why didn’t they” questions that just made me feel angry because I was digging on it for awhile and stooopid because I didn’t think of them while I was watching the movie. For instance, if the security systems that James sells are so complete then why don’t they include a “Panic Room”? A entry proof room where the family can safely hide if their home gets broken into? And why, when the power is cut off to the home, do the backup generators only provide power to the monitors where everyone can watch what’s going on outside and not to the lights in the home? Because a dark house creates more tension but this is just a hoary plot machination that just assumes the audience is too stupid to realize it doesn’t make sense. “THE PURGE” is full of these plot devices that are designed not out of ingenuity but of laziness. Additionally there are two twists (One early, one late) that I saw immediately and that killed the movie a bit for me as well.

Like I said, there are some really good performances here. Rhys Whitfield is especially smarmy as the leader of the gang (Credited as “Polite Stranger”). His wicked smile is one for the ages actually and he carries himself with a haughty yet sincere demeanor that is both unsettling and earnest at the same time. Scenes of the gang frolicking outside of the house bearing all sorts of weaponry and wearing masks are effectively eerie as well. Hawke does a good job as the dad, he essays concern convincingly and although Headey does a good job as well I just don’t buy her being as mealy as her character is. Kane doesn’t have much to do in the film but look good in a Catholic school girl outfit circa 1998 Britney Spears and Burkholder serves as the lynch pin here as he initiates the action that gets the whole ball rolling but he gets really annoying as the film continues.

When the violence arrives, it arrives fast and hard but it only serves to rile up what was a very quiet audience and that led me to another thought. Judging from the frothing at the mouth by some of the audience as people were slaughtered I began to wonder if the events in the film would translate into real life? Does that sound crazy to any of you? I truly hope it doesn’t come to pass but I get the feeling that some knuckleheads might grab a gun and run around “Purging” people in the real world. Sound crazy? Did any of us think that someone would dress up like The Joker and shoot up a movie theater? Sadly, nothing is too crazy in today’s world I fear. 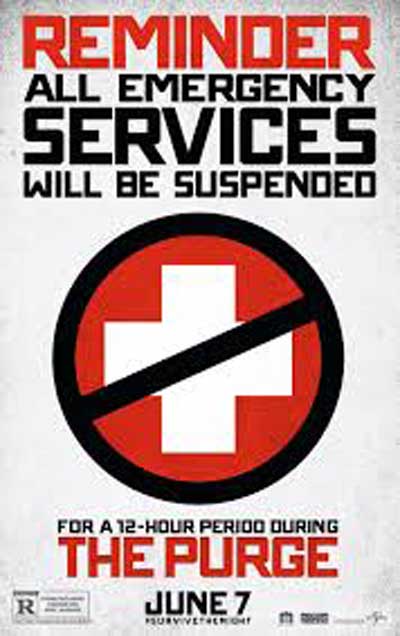 I hate movies like “THE PURGE” because they’re just stupid. I hate “THE PURGE” even       more because I was really fascinated by the way it was unfolding and it ended up even stupider than I expected it to be. It fooled me and that makes me angry, even angrier than I usually am anyway (I am a vengeful Black Saint y’know). But as much as I was fooled by it I can’t ignore that I now think there’s a really good film to be made from this idea and maybe someone with some real conviction and gumption can flesh it out in as feasible a manner as is possible. Good performances and nice cinematography help some but the film fails on every other conceivable level.