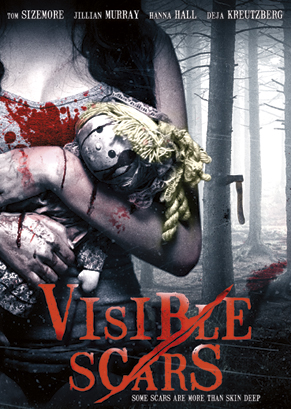 Seventeen years ago, Mike Gillis killed a new mother of twin girls and took the babies to a house in the woods, claiming them as his own to appease his wife’s desire for kids. One day a fire in the house causes it to collapse on Mike and the twins. In the present day, Stacy Walker flees to her uncle’s old secluded cabin in those same woods to escape her abusive boyfriend. That first night she is haunted by the ghosts of the little girls crying for their mother. As Stacy is beginning to figure out her life, as well as trying to unravel the mystery of her visions, Stacy’s friends, unaware of her abused past, bring her boyfriend up to see her…

“VISIBLE SCARS” opens up with Mike Gillis (Top billed Tom Sizemore) finishing up a session with a local prostitute and after hearing babies crying somewhere in her home, decides to ask about her children. When he finds out that she isn’t really what you’d call a “Good Mother” he decides to murder her and abscond with her TWIN daughters in order to satisfy his long suffering wife, who can’t bear his children. Of course he’s a psycho and after awhile he ends up murdering his wife & locking up the girls in a room where the only human contact they have is with him and each other. But this seems to be working out for them for a short while anyway, the girls play happily together in their threadbare room and he goes about his business murdering people. But the girls accidentally start a fire and are seemingly trapped in the house with their unconscious “Dad” as flames consume all around them… 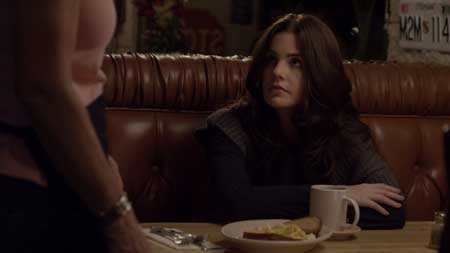 The film suddenly flashes forward to a diner with a young woman named Stacy (Jillian Murray) who’s just looking for a little freedom from an abusive boyfriend, Brad (Jonas Fisch). For some ungodly reason she decides that the nearby woods are the perfect place to keep a low profile as she tries to figure out what to do with her life. Unfortunately for Stacy, her friends (Not knowing that she’s being abused by him) decide to bring her boyfriend up to see her in her little “Cabin in the woods” and she doesn’t know they’re coming.

While all of this is going on we’re introduced to Detective Black (Dave Parke) who’s still investigating the long cold case of the murdered prostitute and her missing twin daughters 17 years later. And of course through some trial & error (And a hackneyed plot contrivance), the case suddenly gets warm and where do you think the trail now leads? That’s right, it leads right to the little cabin that Stacy is laying low in. The same one that her boyfriend is headed to. The same one where the twin girls have been hiding in for the last 17 years! 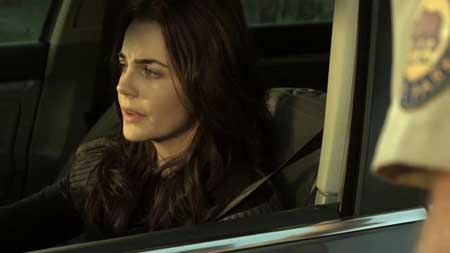 The biggest problem with this movie is the reluctance of the script (By director Turke & Thomas Ferguson) to end it neatly. While it’s commendable that they tried to mix things up with their story, it becomes a bit befuddling as it starts with one story then changes over to a completely unrelated story 15 minutes later only to try to have the two stories convene towards the end in far too accommodating a fashion. It starts out as a crime drama before lurching into a domestic abuse tale which ends up becoming a gory slaughterfest. And while I don’t have a problem with films that want to mix genres up in an attempt to entertain me, I do have issues when they end up confusing the heck out of me after 20 minutes.

Characters are introduced every 8 minutes in this thing! Some of them stick around to the end and some of them make quickly make their presence known with a few key lines of dialog and then are never heard from again. It’s almost like the director was contractually obligated to give everyone at least three lines of dialog no matter what role they played in the script. It just gets far too confusing as he tries to tie them all together into one satisfying conclusion. But the final 20 minutes of “VISIBLE SCARS” does feature some decent blood spilling as the twins of terror start slicing and dicing all who would enter their private little world. It’s actually a bit jarring when the grue hits the ground because up until that point the film sheds nary a drop of blood (Save for the opening sequence with Sizemore). 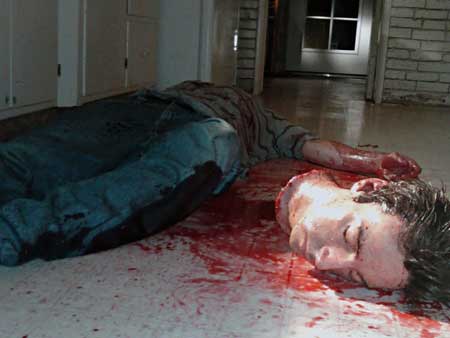 The entire cast gives workmanlike performances that won’t shame any of them in the future. Although top billed, Tom Sizemore is only in the film for the first 15 minutes or so but those 15 minutes are gritty ones so I won’t complain. Jillian Murray is quite the looker and she gives a carefully understated performance that belies her age. All other cast members offer fine support to the main players. Technically the film has a few issues (The fire scene in the beginning is especially cheap looking) but overall the film looks relatively good with smooth camerawork and simple but nice settings to enhance it all.

But the protracted ending of the film is a real ball breaker. It has three moments where I thought it was over but just kept fading to black only to go to another pointless scene that can also function as an ending. It really became a bit exasperating for me because the final ending just felt cheap and uninspired. I’ve seen it 1000 times before and it ain’t getting any better as the years roll by. A little originality would’ve been nice. 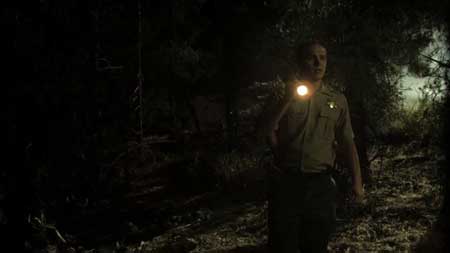 But the film did win “Best Picture” at the 2012 SHOCKFEST Festival and that’s gotta count for something…doesn’t it? It’s a flawed but engrossing little movie that probably won’t warrant a second watch from me but didn’t waste my time watching it either. There’s some good splattery fun waiting for you at the end of it too. Director Richard Turke pulls off a decent little debut with “VISIBLE SCARS”, a film that while flawed is still good enough to warrant a weekend rental for those of you who’ve seen it all.