The NBC show HANNIBAL just keeps picking up speed and this coming weeks episode will continue a little trend they have started with bringing in kick ass guest stars that make you pretty much have to watch.

Last week it was Eddie Izzaard who starred as a captured serial killer and turned in one hell of a performance amping the horrific nature of things and this week we get genre superstar Lance Henriksen.

Here’s the official line from NBC:

“Hannibal” Episode 1.09 – “TROU NORMAND” (airs 5/23/13)
A SERIAL KILLER’S MACABRE TROPHY RAISES QUESTIONS AND CLUES TO MOTIVES AS WELL AS SECRETS – The BAU team hunts a serial killer who digs up his victims, creating a totem pole of their bodies as a macabre trophy. When Nick Boyle’s (Mark Rendall) body is found, Jack (Laurence Fishburne) and Alana (Caroline Dhavernas) question Abigail (Kacey Rohl) about his death. The resurrection of Nick’s body enlightens Will (Hugh Dancy) to some of Abigail’s secrets, and Hannibal (Mads Mikkelsen) convinces Will to keep some of his own.

Attempting to assert independence, Abigail agrees to write a book with Freddy Lounds (Lara Jean Chorostecki) and in the process reveals her biggest secret to Hannibal. Lance Henriksen co-stars.

They seem to have gone out of their way in an attempt to keep Henriksen’s appearance under wraps and little to nothing is known about his role but I’m betting it is going to be something we may all be talking about come Friday morning. 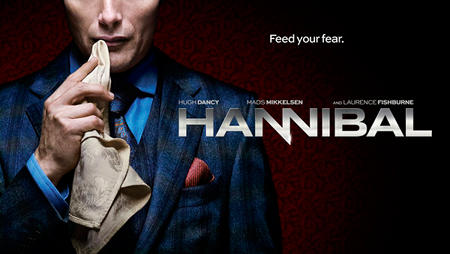