Home | Finally! A Longer Look At HEMLOCK GROVE As A Redband Trailer Debuts

Finally! A Longer Look At HEMLOCK GROVE As A Redband Trailer Debuts

Only a few days to go till Netlix debuts its first foray into original horror programing with HEMLOCK GROVE the Eli Roth backed series that will go live on April 19th. I like the fact that the entire first season will go up all at the same time so if it’s good, which I hope it is, then no need to wait for a week to see what’s next. This one could be a game changer IF it’s good.

Up to this point all we had really gotten to see was little snipits that hinted a possible coolness but today we get an actual trailer for the show and it’s actually pretty graphic, check it out:

So, what did ya think?

“Hemlock Grove is a riveting one-hour murder mystery that revolves around the residents of a former Pennsylvania steel town. When 17-year-old Brooke Bluebell is brutally murdered, any of Hemlock’s peculiar inhabitants – or killer creatures – could be suspects. Through the investigation the town’s seamier side is exposed, revealing nothing is what it seems. Beautiful, terrifying, and graphic, “Hemlock Grove” is unlike anything else in its genre.”

If you haven’t gotten yourself a streaming Netflix account yet, might be the time to spend that eight bucks. April 19th it all goes down. 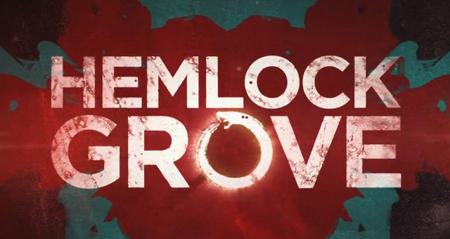