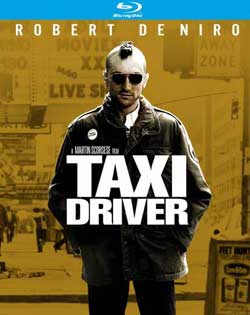 “Travis Bickle is an ex-Marine and Vietnam War veteran living in New York City. As he suffers from insomnia, he spends his time working as a cabbie at night, watching p*rn movies at seedy cinemas during the day, or thinking about how the world, New York in particular, has deteriorated into a cesspool. He’s a loner who has strong opinions about what is right and wrong with mankind. For Travis, the one bright spot in New York humanity is Betsy, a worker on the presidential nomination campaign of Senator Charles Palatine. Travis becomes obsessed with Betsy. After an incident with Betsy, Travis believes he has to do whatever he needs to to make the world a better place in his opinion. One of his priorities is to be the savior for Iris, a twelve year old runaway and prostitute who he believes wants out of the profession and under the thumb of her pimp and lover Matthew.” (courtesy IMDB)

Directed by Martin Scorsese and written by Paul Schrader, Taxi Driver (1976) is set in New York City soon after the Vietnam War, and boasts a legendary cast of superlative professionals including Robert DeNiro, Peter Boyle, Albert Brooks, Jodie Foster, Leonard Harris, Harvey Keitel and Cybill Shepherd. Nominated for four Academy Awards, winner of none, Taxi Driver was vindicated by being awarded the Palme d’Or at the 1976 Cannes Film Festival. 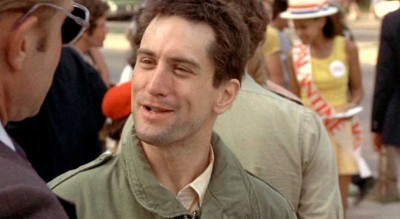 The character of Travis Bickle (Robert DeNiro) was inspired by three major factors: Arthur Bremer, the protagonist in Robert Bresson’s film Pickpocket (1959); the mass murderer in Peter Bogdanovic’s Targets (1968); and by Paul Schrader himself, who wrote Taxi Driver while living through a particularly hellish period in his life. We are shown a guilt-ridden man punishing himself by immersing himself in this degrading environment. Can he cleanse his soul by emerging from hell? Can he rid himself of his inner demons and become civilised by committing cold-blooded murder?

In many ways Taxi Driver is a re-working of John Ford’s The Searchers (1956), with DeNiro assuming the John Wayne role. Again we have a war veteran, outcast and social misfit who (after failing to rescue a young woman) becomes obsessed with rescuing a young girl from her long-haired lover (even though she is content where she is) in order to purify his own soul on the pretext of purifying the girl’s soul. Also, both characters were on the losing side in what they believed was a war of liberation, which is why they are so fanatical about liberating young girls from foreign camps. 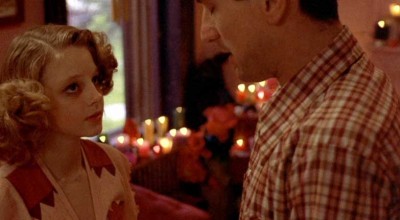 Robert DeNiro has never been better, absolutely terrifying when glaring into the mirror in the classic “Are you talkin’ to me?” sequence and his verbal sparring with Harvey Keitel is great, as we simultaneously see aspects of the character and the actor. Unfortunately, director Martin Scorsese allows his favourite actor free reign too often – his schizophrenia should be represented by two sides of the character, but what we get is one half Travis Bickle, the other half Robert DeNiro. 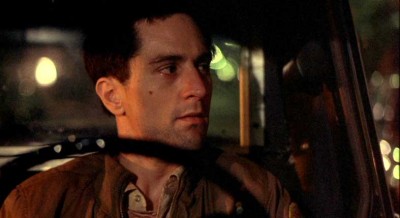 The film’s best moments are not the violent ones, as much as the surreal rides DeNiro takes us in his taxi. These haunting rides establish that Travis is out-of-sync with the world around him, and are beautifully shot mood pieces. No director has better captured the peculiarly wretch look and feel of the underbelly of New York, ably assisted by Michael Chapman‘s cinematography and a haunting jazz score by maestro Bernard Herrmann, who sadly passed away the very day he completed the score for Taxi Driver.

Taxi Driver also marked the first of many collaborations between director Scorsese and writer Schrader, the last of which resulted in Bringing Out The Dead (1999), coming closest to replicating the New York of Travis Bickle. Paul Schrader’s other works as writer and/or director include American Gigolo (1980), Cat People (1982), Light Sleeper (1992), and Cast A Deadly Spell II: Witch Hunt (1994) starring Dennis Hopper as private detective H.P. Lovecraft.

Already controversial upon its release, Taxi Driver hit the headlines again five years later in 1981, when John Hinckley Junior made an assassination attempt on President Ronald Reagan. He subsequently blamed his act on his obsession with Iris Steensman, the character portrayed by Jodie Foster. This event was so influential that paranoid television executives demanded that The Greatest American Hero change his surname from Hinkley to Hanley, but that’s another story for another time. I’ll now graciously invite you to join me next week when I will take you even closer to the event horizon of that insatiable black hole known as Hollywood for…Horror News! Toodles! 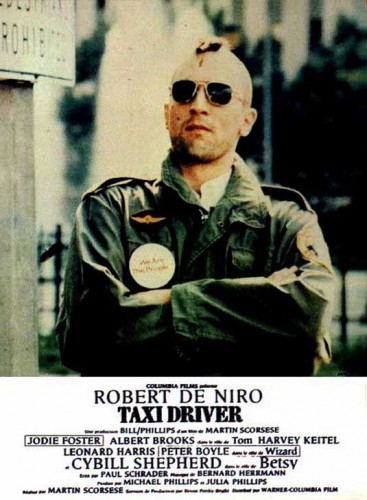