NEW YORK and PHILADELPHIA, March 19, 2013 – “Castle” Star Nathan Fillion, fellow “Serenity” and Firefly headliner Summer Glau, Eisner Award Hall of Famer Stan Lee and WWE® Superstars John Cena® and Daniel Bryan® are at the top of a standout roster of celebrity guests scheduled to appear at Wizard World Philadelphia Comic Con, May 30 – June 2 at the Pennsylvania Convention Center. It is the third in the 2013 series produced by Wizard World, Inc. (OTCBB: WIZD) and will also feature a top-drawer collection of well-known artists and writers and a variety of activities, exhibitors and special attractions.

Fillion and Lee will appear on Saturday, June 1, and Sunday, June 2; Cena is scheduled for Thursday, May 30; and Bryan will be on site on Saturday, June 1 only. Other standout celebrities attending include William Shatner (“Star Trek,” “Boston Legal”), “The Walking Dead” duo of Michael Rooker and Norman Reedus, Adam Baldwin (“Serenity,” Firefly), Jewel Staite (“Serenity,” Firefly), Manu Bennett (“Arrow,” The Hobbit: An Unexpected Journey) and many others.

Additionally, all full price attendees will receive a free copy of the Exclusive Variant Cover of The Walking Dead #1 comic, available only at Wizard World Philadelphia Comic Con. 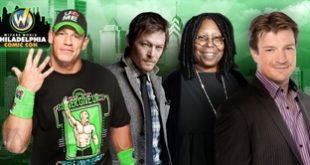