Home | All The Info You Need On HEMLOCK GROVE

All The Info You Need On HEMLOCK GROVE

I noticed earlier today that we posted up the new poster for the upcoming Netflix series HEMLOCK GROVE, also got some more info on the series which will bow on NETFLIX on April 19th.

Coming to us from Eli Roth, Developed by Brian McGreevy & Lee Shipman and starring Famke Janssen, Dougray Scott, Bill Skarsgård, Landon Liboiron, Penelope Mitchell and Freya Tingley, we will be able to watch all 13 one hour episodes on Netflix streaming on the same day, as I mentioned above, April 19th.

Synopsis: From executive producer Eli Roth and based on Brian McGreevy’s novel of the same name, Hemlock Grove is a riveting one-hour murder mystery that revolves around the residents of a former Pennsylvania steel town. When 17-year-old Brooke Bluebell is brutally murdered, any of Hemlock’s peculiar inhabitants – or killer creatures – could be suspects. Through the investigation, the town’s seamier side is exposed, revealing nothing is what it seems. Beautiful, terrifying and graphic, Hemlock Grove is unlike anything else in its genre.

I like the idea of the whole season being posted up on the same day. None of this having to wait a week to see the next hour. I like it a lot.

Here’s that new artwork for you again, just because it’s so damn cool. 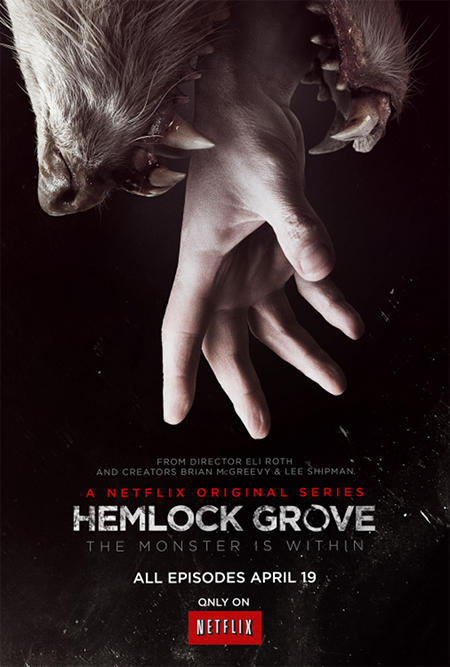