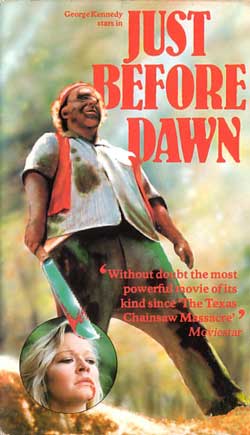 A group of campers hiking through the mountains are terrorized (and brutally killed) by a crazed hillbilly who lives in the area.

There are tons of movies that involve campers being slaughtered by some wilderness-dwelling madman, and the biggest majority of them were produced in the 1980’s. Some of them are jaw-dropping in their awesomeness while others are just plain terrible. Thankfully, Just Before Dawn is a member of the first group I just mentioned, and is one of my favorite movies of its kind to come from this time period. 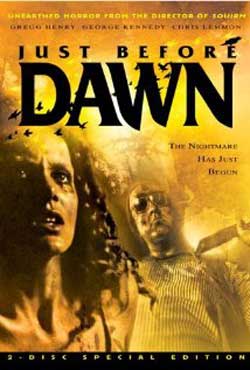 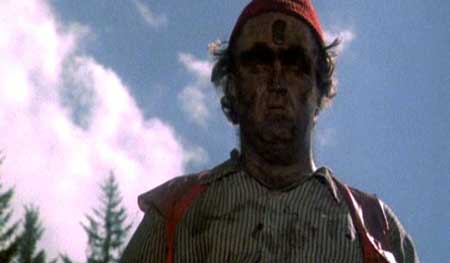 To be honest I can’t really explain why I dig this movie as much as I do. In a lot of ways it is just like any other “psycho killer in the woods butchering helpless young campers” flick, but there is just something about it that I can’t quite put my finger on that really appeals to me. I first saw it on satellite (and when I say satellite I am talking about one of those HUGE dishes that were popular back in the early eighties) back when I was a wee lad of ten or so and loved every minute of it. To tell you the truth it scared the piss out of me but I enjoyed the Hell out of it anyway (what can I say, I was a weird kid), and it was always one of my favorite slasher flicks growing up right alongside Sleepaway Camp, The House on Sorority Row, the Friday the 13th movies, and too many others to list here. I love it is much now when I watch it as I did that first time I saw it, and think that it is one of the most underrated slasher flicks of all time. 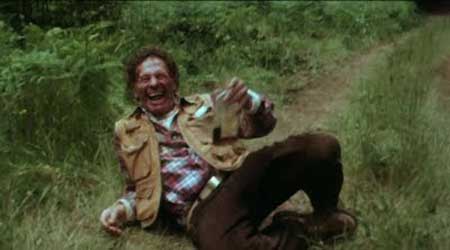 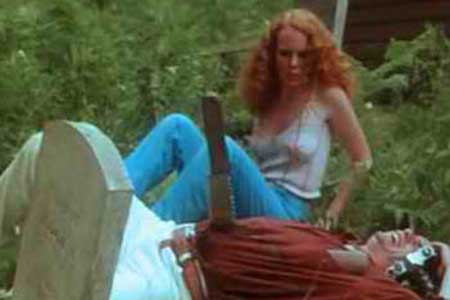 This movie has everything that a good slasher requires if it is going to rock and just stand the test of time in general. It has a well-written script (penned by the always excellent Jeff Lieberman), a bleak, ominous tone, and an awesome killer who gleefully slashes his victims to ribbons with a smile on his face. The creepy-ass score also helps set the mood perfectly, and I don’t think that that the film would have the same vibe without it (much like the original Halloween. Overall there is a little something for everyone who is into slasher flicks including a nice little twist at one point (and who doesn’t’ love those if they are done correctly?) that most people won’t see coming. 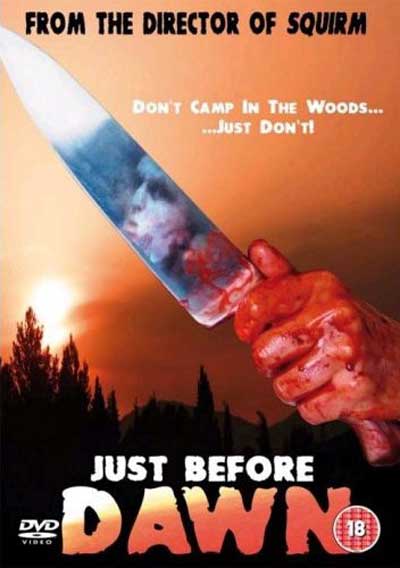 I touched on him briefly, but I feel like I have to say a little bit more about the killer as he kicks all sorts of ass (literally). He is a vicious bastard who enjoys taking out his victims in a number of ways (including introducing one poor son-of-a-botch’s crotch area to the sharp end of a machete in one scene that will leave many male viewers grimacing). He doesn’t mess around when it comes to killing others and is just an intimidating inbred freak in general. There is a lot more to him than meets the eye (no, he isn’t a Transformer), but I can’t go into detail as I don’t want to spoil it for anyone. I’m sure that the killer mutant hillbillies from the Wrong Turn movies were inspired by the killer in Just Before Dawn, but they are nowhere nearly as cool or creepy. 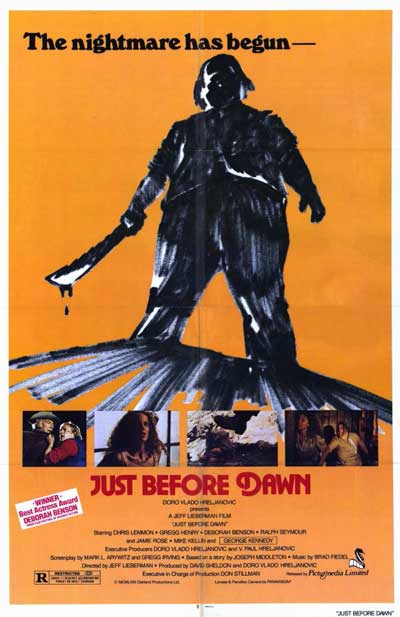 I love Just Before Dawn (as if you couldn’t tell). I think that it is an overlooked gem and it deserves a lot more recognition than it gets. In my opinion it is up there with such classic slashers as The Mutilator, Madman, and The Prowler, and I am even willing to go as far as to say that I personally prefer it over fan favorites such as The Burning and The Hills Have Eyes (Look out, I probably just started a shit storm). If you haven’t seen this film do yourself a huge favor and check it out as soon as you can. If you are one of the lucky ones who has already seen it then watch it again as it is that damn good.