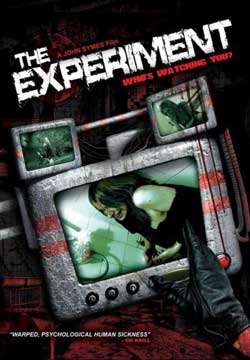 A young woman struggling to make ends meet as a pole dancer signs on as a human guinea pig for trials of a new drug intended to boost the female sex drive.

I’ve seen some tawdry films in my time but this beats anything the likes of Joe D’Amato, Bruno Mattei and Jess Franco had to offer. It’s a sleazy, seedy and deeply unpleasant film but most unforgivably of all is shoddily made.

Mary (Amy Louise Hall) is a young woman with problems. Her boyfriend Tony disapproves of her earning money at Antonia’s, the local lap dancing club and their latest blazing row is conducted in full view of the customers. This costs Mary both her boyfriend and her job. Short of money, Mary replies to an advertisement calling for paid volunteers to take part in clinical trials of a new drug

.Meanwhile, a masked figure breaks into Mary’s house while she is out and sets up a number of hidden cameras in various rooms. This allows a mysterious Mr Big-type character intimate access, Big Brother style, to Mary’s private life. This Mr Big character is somehow involved with procuring suitable candidates for the drug trial, which may not be everything it purports to be.

Mary is visited by a man from the drug company and given a medical to determine her suitability. Happily for her, the film-makers and the audience, she passes the medical and begins the trail immediately. She is warned that the drug is designed to boost the female sex drive and that it takes effect almost instantaneously. Sure enough, Mary is soon complaining of aches and light headedness before she passes out and is put to bed by the agent. From this point on the film becomes increasingly lurid as Mary is obliged to keep taking the pills and finds that she is no longer in full control of herself.

The film is largely comprised of CCTV footage from the hidden cameras installed in Mary’s home which suits the film’s narrative but is pretty uninteresting for the audience. No doubt director John Symes intends some sort of point about the nature of voyeurism but frankly that idea is as old as the hills – Michael Powell was making much the same connection between sex, death and watching in his classic PEEPING TOM, and that was the best of fifty years ago.

Essentially the film’s aesthetic is on about the same level as gonzo P*rnography, particularly the dreary British sort. I once read a review of an adult movie in a mainstream newspaper and particularly remember the writer saying that he couldn’t believe the amount of padding there was: he cited the example of an extraneous funeral sequence in which the entire Lord’s Prayer was spoken. This film has similar problems: having already established that his central character is a lap dancer, Symes treats us to a lengthy sequence of her doing just that, followed almost immediately by another lengthy sequence of her pole dancing. However diverting this may be for some of the audience, it does nothing to advance the story or even add to it, and in fact makes you question what the film is actually trying to do. Again, later in the film Mary undergoes a medical and rather than show her being asked a couple of questions Symes gives us the entire medical. It’s hugely frustrating. And if that’s not enough there’s a sequence towards the end where there is a montage of Mary, by now having gone completely off the deep end, writhing in sexual ecstasy on her bed, on the floor, on the kitchen table which goes on for five or six minutes.

It’s hard to recommend this film for horror fans as there’s almost nothing in it that can be construed as such. I’d say it’s aiming to be a psychological drama but because the content is so pruriently geared towards leering shots of its leading lady (who deserves a medal for forbearance, such are the humiliations she suffers) in various states of undress it comes off more as a bargain basement erotic drama. I’m sorry to say that the only thing I can say in the film’s favour is that it is mercifully brief at 60 minutes but feels an awful lot longer.