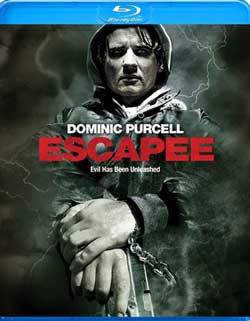 Based on true events…

What the nature of unrelenting evil? Does it have a face? A voice? Once confronted, can we escape it? On April 16th, Anchor Bay Entertainment releases the suspense thriller Escapee on Blu-ray™ and DVD.

While on an observational trip to a high security prison for the criminally insane, young psychology student Abby Jones (Evangelista) has a chilling encounter with psychotic serial killer Harmon Porter (Purcell). Abby returns home that night to study with her two roommates, unaware of the dark forces she’s unleashed within Harmon. That evening, while a hurricane rages through town, Harmon slashes his way out of jail, leaving a brutal trail of bloody bodies in his quest to possess the body and soul of Abby Jones.

Bonus features on Escapee DVD and Blu-ray™ include a making-of featurette, photo gallery and the trailer.