Inspired by Alan’s encounter with something from the dark edges of consciousness, CHANNEL EVIL follows Jez Manson, a local TV chat show host ready to exploit everyone in a bid to make the big time.After watching a successful medium channel a benign spirit, Jez invites her on his show, ready to ridicule her for cheap laughs and a few headlines. But Jez is persuaded to try channelling himself.Full of scorn, Jez agrees, planning to fake it, but it turns out that Jez is a natural and finds himself channelling Ba’al, an ancient source of evil.

Trying to laugh the whole thing off, Jez is unaware that he has opened a door for Ba’al to exploit and return chaos and destruction to the world.Jez finds his dreams full of twisted nightmares that share too many details, matching the next day’s news reports.

However, the channelling show has made the national news and Jez could be moving on to the big time. Persuaded to channel Ba’al again on live TV, Jez knows deep down he’s on the edge of the abyss, but the lure of fame and fortune is too strong.What will he unleash this time?

Alan Grant on the genesis of Channel Evil:

‘The idea originally came to me while I was reading a book by a guy who had formed a “channelling” group to contact the spirits of the dead. I did some research and found that, although it’s ignored by the mainstream media, channelling has a huge audience all over the world. I wondered what would happen if, instead of channelling one of the boring spirits who advocate peace and love, somebody managed to channel the spirit of some long-forgotten scion of evil.

I used to own a flotation tank, it was soundproof, and totally dark. Once, when I was in the tank, I was thinking about a Batman story I was working on, which featured a villain known as Cornelius Stirk. Stirk suffered from severe mental illness, which he “treated” by cutting the still-beating hearts out of his victims and then consuming them. The thought suddenly flashed through my mind: “This is what I do for a living…and it’s evil!” Immediately, and to my terror, a disembodied voice said clearly: “You think that is evil? I can show you what evil really is!” Chills ran up and down my spine. I broke out in a cold sweat. I was out of that tank faster than a ferret up a drainpipe! When I’d calmed down and thought about it, I realised that – whatever the reality of what had happened – it was a brilliant base on which to build a story. I hope it frightens readers as much as it terrified me.’

‘Working with Alan is another ‘dream box’ I’m ticking off.We’ve been trying to get together on a project for over ten years and I’m still buzzing that we’ve finally got there. Alan’s scripts are great to work with, they’re lean and mean, he gets on with the story, doesn’t arse about or waste space.I love the idea it’s set at the English seaside, like a lot of kids (and grown ups) I had many day trips/weekends away in Blackpool, the place has a very seductive glamour, a glittering feast for the senses.

But it’s also a little grubby and seedy, which suits the personality of Jez and his show perfectly. And obviously, drawing nightmare scenes of horror and a big bad ass demonic storm god is a plus.’

We are a creator owned comic book publisher based in the Canadian Rocky Mountains.From our secret Mountain Lair we create stories with experienced A-list writers and artists, and newer blood who pitched projects just too good to turn down. 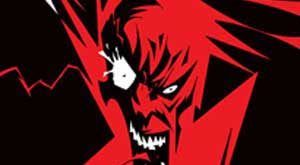