Hello all my children of darkness! This week I’m in the mood to be scared, what do you all say? I think after my brush with the British ‘horror’ flick “PSYCHOSIS” which I reviewed on www.battleroyalewithcheese.com I earned the right to put some nasty stuff into the column, so all those horror directors can see what fear is and why we want it and thanks to Michael Adam Palmer’s honours paper “Fear: A Psychophysiological Study of Horror Film Viewing”, which is available at ecommons.txstate.edu/honorprog/77/ (if you are interested in the way different people perceive the genre and how fear works scientifically) I was truly inspired to step up my game. 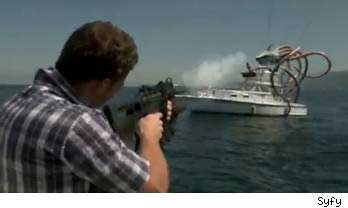 A good B-Movie makes me all warm and fuzzy inside. With the all new Syfy production at hand, who can say no to a terrible monster that is half-shark and half-octopus? Directed by Declan O’Brian (“Wrong Turn 3: Left for Dead”) and written by Mike MacLean (“Dinocroc vs. Supergator”) I can’t help but wonder how much fun it was to put together this made-for-TV-movie. Just imagine the fun of having to deal with this freak of nature… I haven’t anticipated a sharky terror since… “Megalodon”! In my opinion this is the perfect way to make people fear the waters again… and I got you all a trailer to tease you a bit more as to what this is all about!

You like? I bet you do. In fact I bet you like it so much, ya’ll may want a miniature sized one to put in your aquariums and call them Joe… well I do.

STAG NIGHT OF THE DEAD

Well, well, well… we might have another zom-bedy (zombie comedy) that could blow our socks off. “Stag Night of the Dead” is coming and it looks like it will be mixing “Shaun of the Dead” and “American Pie” together to give us another take on ‘British Zombie Humour’.

“Stag Night of the Dead” is written and directed by Neil Jones (“Reco Men”) and stars Sebastian Street (“The Night is Young”), Sophie Lovell Anderson (“Lovelorn”), Rez Kempton (“Base-line”) and many more unknowns. But we can dig it… especially after a plot summary which is so original, it could actually work:

“If the mysterious plague sweeping the nation wasn’t bad enough, Dean is still going ahead with his doomed wedding tomorrow morning. That leaves him with a choice. Pick up the button holes and chocolate fountain as instructed by bridezilla Elaine, or go with five mates (and a stripper) to play ‘Zomball’ at a top secret military compound where you get to shoot zombies with huge stun guns. Disobeying the golden rule of Zomball (‘never never humiliate a zombie’) the stags face overwhelming odds from the massed undead and each stag is hunted down. The truth about Zomball is finally revealed and suddenly the mother-in-law is the least of Dean’s problems…”

The flick is set for release (according to imdb.com) for the 31st August 2010.

“30 Days of Night” directed by David Slade (“The Twilight Saga: Eclipse”, “Hard Candy”) was in my opinion one of the worst Vampire movies ever to hit the big screen (excluding “The Twilight Saga: New Moon”). However with a new director/writer for the sequel, Ben Ketai (“”) and co-written by Steve Niles (“30 Days of Night”) maybe this won’t be such a traumatic experience for vampire lovers to watch. I mean it can’t be worse, can it? 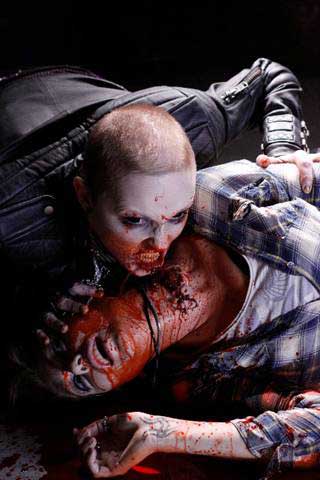 “It’s been a year since the Alaskan town of Barrow’s population was decimated by vampires during its annual month long sunset. Riddled with grief over the death of her husband, bound by nightmares and void of all emotions beyond hate and sorrow, Stella (Kiele Sanchez) has spent the past months travelling the world, trying to convince others that vampires exist. Met with skepticism and laughter, Stella is ready to throw in the towel when a group of lost souls (Rhys Coiro, Doira Baird and Harold Perrineau) offers an incredible opportunity: the chance to exact revenge upon Lilith (Mia Kirshner), the vampire queen responsible for the assault on her sleepy Alaskan town. With nothing remaining to live for, and nothing left to fear, Stella joins their mission and ventures into the uncharted underbelly of Los Angeles where she pushes herself to the most extreme limits to stop the evil from striking again.”

The plot synopsis seems a little weak and somewhat cliché to “Queen of the Damned”. But you all know me. I am somewhat of a sceptic. If I was wrong whilst being sceptical about a movie, I’d gladly take back my words and admit whether or not I was wrong when I see it.

The flick is set to go straight to DVD and the release date has been announced for 5 October 2010. Other rumours have also made the rounds saying that a third instalment will follow, making this a trilogy…

In other sequel news… Robert Rodriguez has confirmed “Predators 2” to IGN lately. The recent and massive success of the first film, “Predators” has made everybody already asking, when there’ll be a sequel. Rodriguez was nice enough to say he had some ‘ideas’ as to the storyline of the flick, but that he probably won’t direct it, considering that he is currently still working on yet another highly anticipated sequel, “Sin City 2”.

Oh joy, we’re at THAT place again. Well don’t worry too much because I’m not going to rant and rave about my dislike for remakes again, you all know how I feel by now. So… let’s get on with it.

“The Little Shop of Horror” (1960) is next in line for yet another remake, which makes me sad to say the least. This poor classic is rumoured to get another life by Declan O’Brian (“Sharktopus”) as the director. There isn’t much to go on as of yet, but I’ll keep you updated as to what is going on with it as soon as the news becomes more concrete. 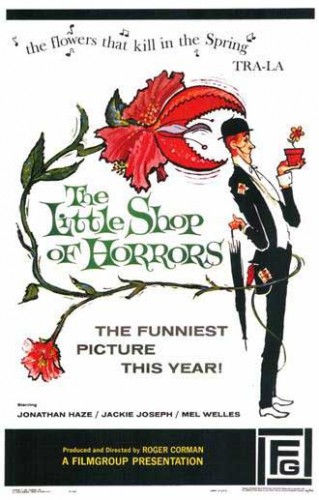 “Attack of the Killer Tomatoes” is also going to get revamped according to rumours. Apparently Kent Nichols and Douglas Sarine (both worked on “Ask a Ninja”), are writing a script with Nichols set to direct. “Attack of the Killer Tomatoes” is a classic b-movie which has already been remade, so why do it again? Sometimes I seriously think that these Hollywood execs smoke something illegal and then come up with these ideas just to piss me off, but okay, lets see what happens.

In other remake news… My prayers were answered and I think many of your ‘hail-horrors’ worked since last time I was here… guess what… “Rosemary’s Baby” has been scrapped from the remake list! YAY! You all remember it, right? Where Rosemary gets impregnated by Satan and all that jazz? It’s very memorable… You wouldn’t forget it…

Okay, so anyway, the deal was that Michael Bay (“Transformers”) would have been behind the screw-up of the classic 1967 film, but apparently Brad Fuller and Andrew Form (the guys who were writing it) couldn’t come up with a fresh angle that would’ve made the film ‘credible’. Thank the horror gods for that one!

Form tells Collider.com, “We went down that road and we even talked to the best writers in town and it feels like it might not be do-able. We couldn’t come up with something where it felt like it was relevant and we could add something to it other than what it was, so we’re now not going to be doing that film.”

Well aren’t you smart. I give cudos to them for realising that a classic should stay a classic and not be messed with.

YAY ME! Dreadcentral.com is having their 2nd “Reaper Awards”, which honours the best of the best in horror Blu-Ray’s and DVD’s! And yes, I needed to put it in because I’m “The Reaper” and what I say goes, okay? (That’s just me being silly again.) It’s coming in October and your online vote counts as to who’ll be winning what. Check out www.reaperawards.com and sign up to be notified for when voting will start. You know you want to… even if it’s just for little old me…

Halloween is approaching at a fast pace now, and I’m psyched! But it’s only one day in a year, right? Don’t worry, because the horror fun doesn’t stop when the clock strikes 12. The 1st of November 2010 will be a blast if you are in the Tuscaloosa area. Basically this horror short film festival will run from 7 pm to 10 pm, and tickets will cost $10.00. But that’s not all, if you are an aspiring director and have a horror movie somewhere you can also submit! Film entries should be 15 minutes or less and categories will be broken down by antagonist (ghost, monster, zombies etc.) and there isn’t an entry fee! 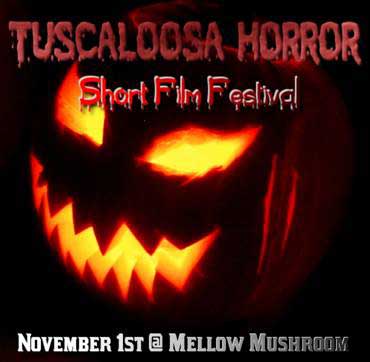 There will be trophies given away (I hear it’s uniquely southern… not sure what that means, but okay).
Go check it out, I know I would.

No matter how many movies, books, shows etc that features vampires there are, we just can’t get enough of them and although we would love all of them to be great, they aren’t all astounding. Thankfully we have a few good writers out there and Gabrielle Faust is one of them! Who is Gabrielle Faust? She’s just some awesome chick who knows about vampires (among other things) and knows that they don’t sparkle… 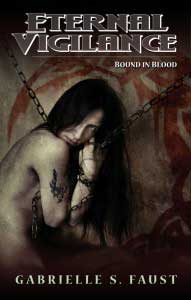 Anyway so her new book “Eternal Vigilance III: Bound in Blood” is available for pre-order and boy oh boy, do ya’ll want to order. Each pre-order (which is exclusively available at her website www.gabriellefaust.com) will get a:

And all this will just cost you $20.99 (+ shipping & tax). The pre-order packages will be available from July 21 through to September 1st, and is the official release date of the novel from Immanion Press.

Now what are you waiting for?

In my previous column I reported that our very own jokester, Monstermatt Patterson, was searching for a publisher for his joke book “Monstermatt’s Bad Monster Jokes Vol.1”… Guess what? He got a publishing deal! Wahoo!! Soon we’ll all have a bad joke book in our homes if things go as plan and I personally cannot wait. So, from all of us here at horrornews.net I would like to congratulate Monstermatt Patterson on this great achievement. Keep up the great work! 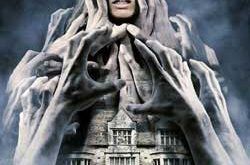